News
Business
Movies
Sports
Cricket
Get Ahead
Money Tips
Shopping
Sign in  |  Create a Rediffmail account
Rediff.com  » News » Shocking! What some doctors will do for money! 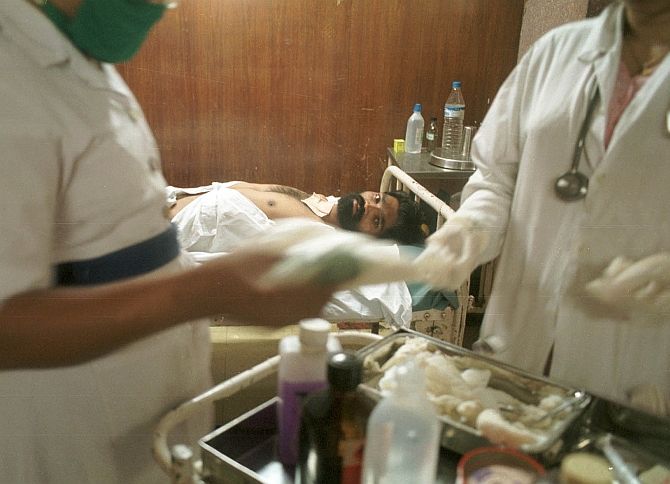 'Can we forgive the pathologist who wrongly labelled a healthy person as a diabetic patient for receiving the favour of the referring physician and possibly for a few thousand rupees?'

'The delinquent homeopath who caused a cataract in a child by giving terribly wrong drug must go to jail.'

'How can we permit a gynaecologist to practice her/his specialty if s/he tinkers with the faith of the patient in an abhorrent way?'

We know that some medical policies and many medical practices in India are deeply flawed. We have heard of 'widespread examples of irrational drug prescribing, kickbacks for referrals, and unnecessary investigations and surgical procedures.'

However, the details revealed by Dr Arun Gadre, a gynaecologist from Maharashtra, in the British Medical Journal after interviewing 78 doctors from across India is very disturbing, shameful, and distressing.

The 'Personal View' in the journal reflects the conclusions in his Marathi book, Kaifiyat -- Pramanik Doctoranchi (Reflections by Sincere Doctors) based on the testimonies of these doctors.

The book lists many malpractices. Some doctors get Rs 30,000 to Rs 40,000 for referring patients for angioplasty. Of the 150 doctors contacted, only three were willing to refer patients without kickbacks.

Another diabolic practice is followed by some gynaecologists. They perform ultrasounds without indications in pregnant women who complain of trivial abdominal pain, then fabricate false reports of cervical abnormalities and advice the women to have cervical stitches, with the pretext of preventing miscarriage!

Patients seldom go for a second opinion. The delinquent doctor does not give them any documents to avoid being found out.

Another tragic example is that of homeopaths who give little girls corticosteroids for red eyes; long term use lead to cataracts that required surgery.

Over prescription of a battery of tests is very common even when there is no suspicion of pathology. A shocking practice was what a pathologist referred to as the 'sink test'.

"Only a few of the tests are performed, and the extra blood collected is dumped in the sink. Fabricated results are given in the normal range for all tests that were not performed. The patient pays a large sum, which is shared by the referring doctor and the pathologist," Dr Gadre discovered.

In Maharashtra, many homeopaths and doctors trained in Ayurveda practice allopathy with the cursory knowledge imparted by medical representatives.

A few years ago I discovered that the young physicians taking care of heart patients in an ICU in Navi Mumbai were all fresh graduates in Ayurveda. Then they were working for a pittance; once their 'training' in such a hospital is over they can go back to locations outside the city and carry on allopathic practice legally.

Some pathologists label healthy persons as diabetic patients making them dependent on the referring doctor for life!

"These interviews indicated the alarming extent of the deterioration of rationality and ethics in India's private medical sector and the need for stringent, transparent, and mandatory regulation," Dr Gadre warned.

"These interviews underscore one fact -- paying money does not guarantee good healthcare. The private healthcare system largely treats patients as revenue generators, without rationality or medical logic," he added.

While the degrading depravity of the delinquent doctors cannot simply be considered as ethical aberrations, there is a silver lining; 36 interviewees who described the malpractices were willing to declare their names along with their statements.

One legitimate criticism of Dr Gadre's article is that he did not suggest clear solutions to the questions raised by him.

He quoted the suggestions of some interviewees that the commercial transaction between patients and doctors must be severed. He did not explain how we can achieve this.

He also proposed that the only solution for India would be accountable social regulation of the private medical sector and the movement towards a combination of social insurance and a tax based system for universal healthcare. Again, he did not explain the fine print in these suggestions. He should have elaborated possible solutions in the BMJ article.

"We are coming out with solutions in the form of a universal health care document soon. In a further edition, my colleague Dr Abhay Shukla is adding an entire part on all possible, short and long term solutions," Dr Gadre clarified in his e-mailed response to me.

"Regarding your query regarding practicing doctors lending a hand to take the guilty to court, the answer is no. I am sure that no one will come forward. And personally I am of the opinion that the government must take that job," Dr Gadre said.

"An effective regulation framework must be implemented on the ground with no opportunity for government bureaucrats to use it for taking bribes," he added.

"For that some kind of social accountability mechanism needs to be brought in the structure of the act itself," Dr Gadre said. "We have already prepared a draft of such a modified act with help of legal experts."

I believe that by fixing charges for medical imaging like a CT scan, angiography and MRI and medical and surgical procedures by appropriate legislation we may be able to discipline some delinquent specialists. Let us hope that the proposed legislation will cover these items as well.

In a telephone interview, Dr Gadre hinted that there are plans to start a national movement to break the cozy relationship between physicians and commercial interests. The fact that Dr Gadre could gather support from so many zealous interviewees nationwide augers well for such a programme.

I suggested to Dr Gadre that in the next edition of his book, he must illustrate the malpractices with the possible punishments under the existing Criminal Procedure Code. Because of his sincerity and commitment Dr Gadre may be able to secure free support of the best legal brains in the country to carry out this task.

The delinquent homeopath who caused a cataract in a child by giving terribly wrong drug must go to jail.

Similarly, how can we permit a gynaecologist to practice her/his specialty if s/he tinkers with the faith of the patient in such an abhorrent way?

Can we forgive the pathologist who wrongly labelled a healthy person as a diabetic patient for receiving the favour of the referring physician and possibly for a few thousand rupees?

Many young physicians are conscientious. They have themselves started raising their voices against malpractices. Dr Gadre's article may hopefully trigger social awareness to check medical corruption. 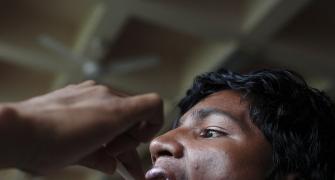 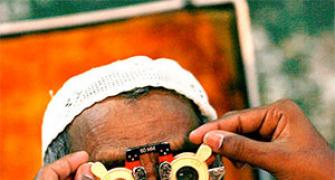