It would seem that Indrani's application was not something prepared or maybe even sanctioned by her lawyers and was a courtroom enterprise she had embarked on by herself, perhaps not realising it distracted from the main business of the trial and didn't help her cause.
Vaihayasi Pande Daniel reports from the Sheena Bora murder trial.
Illustration: Dominic Xavier/Rediff.com

Thursday, November 23, was Round II of the Indrani versus Peter exhibition boxing match, which is now a freak side show to the Sheena Bora murder trial.

Undoubtedly not something their lawyers, particularly hers, would have wanted.

Peter Mukerjea filed his dignified reply, through his lawyers, to his wife's startling application of last week, November 15, that suggested his BPL Mobile cell data records should be called for and indirectly accused Peter and associates of having had something to do with the disappearance of Sheena, Indrani's daughter from her first marriage.

This was filed in court.

Indrani knew Thursday she would be the cynosure of all eyes.

She dressed for the part.

Wearing a short, white, sleeveless kurta, speckled by tiny gold sequins, that seemed once a daring dress from her pre-jail days, matched with purple leggings and a tie-dye purple and green chunni, Indrani looked younger than even her younger daughter, the college-going Vidhie Mukerjea, from afar.

Certainly not a 45 year old, standing trial for the gruesome murder of her elder daughter, Sheena.

Indrani has always aroused curiosity in the Mumbai city civil and civil sessions court for being that allegedly horrific mother who killed her daughter. But ever since Indrani shot off her latest salvo at Peter, via a court-filed application/letter, saying she needed to 'provide justice to my daughter, Sheena, who may have lost her life on account of greed, betrayal, jealousy, lust and ill-will of persons whom she dearly loved and trusted', she has become a bigger novelty on the premises.

Attracting more media attention. More lawyers to the courtroom. More misgivings too. While Peter perhaps collects all the sympathy and maybe pity.

Indrani's ever evolving court attire seems to add to the appeal, with quips doing the rounds that her lawyers are not just busy toiling in her defence, but also out shopping for the trendiest on-point styles for her.

Before proceedings began on Thursday, Indrani sat outside Courtroom 51 on a wooden bench talking animatedly to Avirook Sen, a former INX employee and once executive editor of the NewsX channel.

The last time Sen wrote about the Mukerjeas, it resulted in a 5,900-word expose of the couple in which Indrani was labeled 'half of the Power-that-was.' Indrani apparently bears no grudges.

In the middle of this chat, a young African woman, who happened to be in court at the same time, came over to talk to Indrani warmly. She had apparently spent time with Indrani in the Byculla jail, central Mumbai, and had now been given her freedom.

Accused No 2 Sanjeev Khanna stood a little further away, absent-mindedly surveying the scene, holding onto an orange grocery bag. Unlike Indrani and Peter, Sanjeev, who has a gentle, humble, demeanour, doesn't invite much notice.

Peter sat a safe distance away. He was around the corner with his sister Shangon Das Gupta and a friend by his side, having his tiffin and chai. The friend declared later that the events of the trial were getting "weirder and weirder".

Indeed, it is often difficult to remember why all are gathered there given the baffling zigzag course of the case.

When the hearing began, Sudeep Pasbola -- Indrani's counsel -- moved for a postponement/adjournment since they were still anticipating, for weeks and weeks now, the final call data records, from Airtel, of the cell phone Shyamvar Pinturam Rai, the Mukerjeas' former driver, was using at the time of his arrest in August 2015 for illegal possession of a country pistol.

Early December was chosen as the next date since the records had not yet come in and were still being extracted by some complicated software process by an agency that Airtel had outsourced the job to. Note that the same process, that spat up Rai's 2012 cell activity records, took Vodafone hardly 15 days to do.

Deputy Superintendent of Police K K Singh -- the investigating officer from the CBI who rotates his time between various courts across the country, appearing in multiple cases, including the fodder scam case in Ranchi, Jharkhand -- believed the CDRs could be handed over by December 4. Pasbola requested time to examine them.

The main trial would therefore resume on December 5.

CBI Special Judge Jayendra Chandrasen Jagdale, who presides over The State vs Indrani Mukerjea/Pari/Indrani Bora/Indrani Das/Indrani Khanna and others as well as vs Pratim Mukerjea/Peter Mukerjea trial, spent a few minutes understanding the basis of Indrani's application (or Exhibit 189) for Peter's CDRs from Pasbola, checking if it was inculpatory or under Section 30 of the Indian Evidence Act.

A discussion ensued over how 'the defence of the accused (Indrani) was not bound on the defence of the co-accused (Peter)' and that 'CDRs cannot be asked for the asking' and the judge wondered in what capacity Indrani was asking for them.

Judge Jagdale then turned to Shrikant Shivade, Peter's lawyer, who had successfully defended Salman Khan in the Bandra hit-and-run case against the actor, and had just filed Peter's response to Indrani's letter to the court and queried him about the time he needed to sort this newest sub-matter out.

Shivade asked for a hearing to sort it out on Monday, November 27, and said offhandedly it would not need a great deal of time at all.

In a quiet and unconcerned tone, showing himself to be least perturbed, he deemed the extraordinary accusations found in Indrani's application as "imaginations".

Indrani stood eagerly in the corner of the accused box at the back, her chunni wrapped across her bare shoulders, and listened with fascinated interest; an intriguing child-like expression flickered on her face.

Added Shivade. "The allegations are uncalled for."

Again he repeated thoughtfully and almost kindly, "Imaginations" as if the subject of the conversation bordered on the absurd.

It would seem, without Shivade having to broadly hint at it, that Indrani's court application was not something prepared or maybe even sanctioned by her lawyers and was instead a little courtroom enterprise she had embarked on by herself, perhaps not realising, like all the lawyers in the room had, that it distracted from the main business of the trial, the cross examination of Rai, and didn't particularly help her cause.

Shivade went on to say the police officers had interrogated and thoroughly investigated his client.

Shivade concluded sonorously: "They (allegations) are absolutely false and therefore cannot be looked into."

Pasbola then told the judge that once he had the Airtel CDRs in his possession he would need just a few more days to finish his cross examination of Rai.

Shivade brought to Judge Jagdale's notice that he was working on the final arguments of Salman Khan's 1998 black buck poaching case in Jodhpur and that he may be missing from this court for four days.

Matters then moved to the length of cross examination required by Shivade.

Judge Jagdale enquired of Shivade, hopefully but firmly, "You need only a day?"

The judge smiled persuasively, "Only one day is necessary."

Shivade: "It depends on how he (Rai) answers."

He explained that most of what Pasbola had cross examined Rai about would not be related to his defence of Accused 4, "Not concerned with all those points."

On Wednesday, Shivade was in the Bombay high court, before Judge Anuja Prabhudessai attempting to win a plea to requisition for the Khar police station case diaries (logs), to use in Peter's defence.

The Khar police station, north west Mumbai, was where Rai was brought after his arrest and where this case initially started up. The high court reserved the order on Peter's plea for the case diary.

The CBI also filed a reply to Indrani's application.

The CBI further stated Indrani had been delaying the case by seeking CDRs of various witnesses and accused (the delay here, a reference to the Airtel records), 'In view of aforesaid facts and circumstances of the case it is most humbly submitted and prayed that the above application of accused Indrani Mukerjea may be kindly decided on merits, in the interest of justice. Submitted and prayed accordingly'.

The rejoinder Peter submitted to the court in response to Indrani's application was fairly non-controversial. Or to put it better in local parlance: thanda (lukewarm). Unlike her neat, hand-written one, this was typed double-spaced and bland looking.

It was expected that his reply might either 1. Attempt to go into lengths refuting Indrani's claims. Or 2. Agree for the calling of his call data records and the post-mortem of the data might be self-explanatory, showing the court that Indrani's allegations could be baseless.

Instead, the reply suggested that this was some sort of daring legal strategy Indrani was employing and left it up to the court to decide what they would like to do with her request.

Though in tenor it was on the sober side, it did toss around phrases like 'sinister plot', making it read like a Victorian mystery novel.

Like: 'May it Please Your Honour:
At the outset the Accused no. 4 (Peter) states that the Letter/Application is filed by the Accused no. 1 (Indrani) with an ulterior motive to malign the reputation of Accused no. 4 and to cause serious prejudice against him. The said conduct of Accused no. 1 is highly condemnable, contemptuous and clearly an attempt to cause interference in the administration of justice...'

'It appears it is a desperate attempt of the Accused no. 1 to wriggle out of the situation thereby trying to play the "victim" card. The Accused no. 4 does not wish to engage himself in such mud slinging as he has complete faith in justice system and intended to present his defence truthfully before this Hon'ble Court according to law.'

'These wanton and baseless allegations are belatedly made to invite some observation/findings of this Hon'ble Court and are totally irrelevant to the prayer calling for CDR of Accused no. 4.'

'The Accused (Peter) is not aware whether making of such false allegations is her well thought legal strategy or not. However the Accused suspects a sinister plot to drag the Accused in controversy...'

'The entire Contents and allegations are based on the figment of imagination of Accused No. 1 which are false and have been deliberately made at a belated stage with malafide intent...'

Driver Rai didn't even make it into the courtroom on Thursday. He sat outside twiddling his thumbs, with his police escorts.

With the husband and wife squabble taking over, Courtroom 51 felt closer to the family court in Bandra, north west Mumbai, a short distance away from where Rai had alleged that Sheena had been murdered. 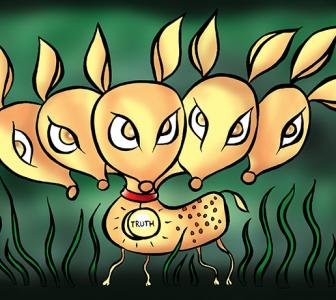