Dramatic minutes like the sentencing by a judge or a round of artful cross examination hog all the attention in a courtroom.
But more noteworthy and infinitely more memorable are the human moments -- Like when a brother and sister hug before a judge.
Or the steady support between a husband and a wife in court.
Vaihayasi Pande Daniel reports from the Sheena Bora murder trial.
Illustration: Dominic Xavier/Rediff.com

Peter Mukerjea and his sister Shangon Das Gupta exchanged a long and special hug near the door of Courtroom 51 at the end of the Friday, May 4, hearing in the Sheena Bora murder trial.

Since the Mumbai city civil and sessions court was breaking for summer recess, she would not see her elder brother, and the star of the Mukerjea clan, till the next hearing, scheduled for 25 days later.

His sister could visit him at the Arthur Road jail, near the Chinchpokli railway station, central Mumbai. But visiting relatives in that 92-year-old jail is said to be an ordeal, especially on holidays and weekends, when the queue to get in takes way over an hour. Some 2,000 prisoners live under a roof built for 800.

Once you are inside, information has it, there are some ten slots where one can meet a prisoner in a small, fetid room stuffed with relatives, four per accused/convicted.

Conversation apparently happens through two layers of glass windows and via a phone and every prisoner gets about 15 minutes with his relative/s.

No wonder that the families of the accused prefer the corridors of the court -- no matter how humid or uncomfortable -- to meet.

The Friday hearing was a very short one.

Set to begin at 2.45 pm there was no sign of Accused No 1 Indrani Mukerjea, Accused 2 and Indrani's former husband Sanjeev Khanna and Accused 4 Peter for the next hour nearly.

Indrani, wearing a red bandhani chunni wrapped about her white kurta, which had red mango-shaped motifs on it, a red bindi and a white salwar, came pattering up the six grimy flights of steps ahead of her co-accused.

Of light frame, she walks swiftly. She said she had been brought to the boarding area of her Byculla jail, central Mumbai, at 1.30 pm. Lack of escort guards had delayed the departure of the trio of accused from both jails.

When they arrived, some 20 police guards showed up with them, protecting them.

The arrival of the accused didn't begin the hearing.

Everyone sat around expectantly, twiddling their thumbs. And sweating.

It was a near perfect Mumbai courtroom quorum, which is always an enormous challenge to achieve, except for the absence of the hero of that moment -- the stocky moustachioed advocate with a stern face and a booming voice that is much more overpowering than his height.

Everyone got edgy, tetchy. Indrani's lawyer Gunjan Mangla, wearing a pretty white embroidered blouse under her black lawyer court made chakkars (rounds) of the courtroom upstairs where Pasbola was held up.

From time to time, the judge, who had to leave early -- by 4.15 pm -- made enquiries of the other defence lawyers about Pasbola's whereabouts.

Finally at nearly 4.15 pm, Pasbola came hurrying along the third floor corridor, holding up his hands together in forgiveness, "My apologies to everyone."

As he rushed into Courtroom 51 he apologised profusely to the judge saying he was tardy because he had to hear the very long judgment in a case he was handling.

Judge Jagdale, who had been mildly crochety earlier, said he heard from Pasbola's colleague (Mangla) that the advocate was merely listening to a judgment in another courtroom and wondered.

Equanimity restored, the judge, always a patient man, gave a big smile from behind his moustache and said: "Half an hour is for your disposal."

Friday Pasbola focused on comparing what the third witness -- PW3, Indrani's secretary Kajal Sharma -- told the court during her testimony a few days ago and what she told the Khar police station, S V road, north west Mumbai, shortly after Indrani was arrested in 2015.

Pasbola was in a compassionate and expansive mood and took pains to be very gentle with Sharma.

He smiled a lot at her, joked and, even if it was futile, attempted to coax more out of her with a velvet glove approach.

Sharma, dressed in a white kurta with a white pattern on it and beige narrow pants, smiled a few times on the witness stand, trying to be, it would appear, more amenable too.

Her husband, in a blue striped shirt and slacks, was, as usual, in chair 5, quietly supporting her, always keeping his eyes faithfully on her, inspiring confidence in her, although she never looked at him during the proceedings.

He kept her pink handbag on his lap and carefully held a white cloth bundle. What initially mistakenly seemed another bag with flowers on it, was actually the same folded up flowered chunni, that Sharma brings each time to court.

Maybe it has some unique significance or is her a lucky charm. Or it is for the hot sun, when they exit the court after the hearing. It was 33 degrees C on Friday.

The Sharmas seem devout and believing people. They always have tikkas on their foreheads when they arrive in court, probably having gone to a temple or done a puja before coming.

Both sport rings. His are silver. Maybe the chunni is wrapped about a religious book or artefact. One is curious to ask, but there is an unapproachable dignity to this couple.

Dramatic minutes like the sentencing by a judge or a round of artful cross examination hog all the attention in a courtroom. But more noteworthy and infinitely more memorable are the human moments -- Like when a brother and sister hug before a judge. Or the steady support between a husband and a wife in court.

The few instances of humour between lawyers from opposing sides, minutes after a full-blown argument. A judge's gentleness. Or the cute little children wandering about these corridors to see their parent, usually their father.

First, Pasbola asked Sharma, Friday, why she hadn't told the Khar police station about how Indrani requested her in May 2012 to sign a letter on Sheena Bora's behalf to be sent to her (Sheena's) employer Mumbai Metro One at Andheri, north west Mumbai, and how she had resisted and then Indrani, her boss, told her to practice the signature and complete the task.

Sharma insisted she had told the cops at the Khar police station. Pasbola asked why it was not in her statement to them.

The secretary, her eyes watchful, looked at the judge and explained tentatively, "Statement toh shayad Marathi mein likha (The statement was probably written in Marathi)," indicating that something was lost in translation.

Pasbola queried further, wanting to know why she never mentioned to the Khar police that she was under pressure to practice Sheena's signature and Indrani ordered that when she was up to speed with being able to sign like she was Sheena, she should send a sample back on e-mail.

"Aap ko pressurise ki, aur aap ko koi option nahin tha, (except) unka hukum man ne ke liye (She pressurised you and you had no option but to follow her orders)."

Sharma first asked for the question to be repeated. Then she said she had.

When it was pointed out it was not in her statement to the Khar police she asked to see the statement.

Pasbola asked if she could read Marathi. She said not with any "frequency." She added that she had given the same version "sab jagah (everywhere)."

Again, Pasbola enquired why she had not told the Khar police that she was ordered by Indrani to sign on the cancellation of Sheena's lease agreement. And even when she told Indrani she did not remember how to sign like Sheena anymore, Indrani ordered her to practice.

Regarding the absence of this point in her statement to the police, Sharma said, "Word to word exactly nahin hoga. Hum Hindi mein bolee and woh Marathi mein likha (It won't be exactly word to word. I spoke to them in Hindi and they wrote it in Marathi)..."

But this time that special Sharma reasoning didn't fly.

Pasbola, still in exceedingly patient mode, "Exactly nahin. Hai hi nahin! Aisa kahin likha nahin hai (It is not about exactly. It is not even there! It is not written anywhere)."

Again, Sharma asked to see her statement that had been recorded in Marathi in 2015.

Again, Pasbola asked if she could read it and if her Marathi skills were any better than his, which he said were not commendable.

Sensing the reading of the statement was going to waste time, the lawyer quickly moved to the next point, asking if Sharma had told the Khar police that she had created, at Indrani's behest, an e-mail account for the missing Sheena with the ID sheena.bora@hotmail.com in her absence in June-July 2012.

Sharma was fuzzy. She maintained she had told the police about creating that e-mail ID, but she wasn't sure if she had mentioned the exact e-mail address.

The lawyer wondered if she perhaps could not remember that she had not told the police.

Sharma sheepishly: "Mostly yeh ID bataya (Mostly I told them about this ID)."

Pasbola and Sharma then both dissolved into laughter, in unison, in a rare moment.

When the lawyer's forbidding features crease with laughter he looks his most charming.

Sharma was asked if she ever showed the courier office from where she sent Sheena's resignation letter to the police or the CBI.

May 21 was suggested as the date for the next hearing.

Pasbola mentioned he might be going out of town. Perhaps the lawyer was off for a golfing holiday, given he is an aficionado of the sport. May 29 was then settled for.

Special Public Prosecutor Bharat Badami, who was holding the fort in his colleague Kavita Patil's absence, said he was very much in Mumbai all through.

Pasbola quipped, with a big grin at Badami: "Sant mahant kahi jaate nahin (Saints and great people didn't have to go anywhere). Everyone comes to see them." 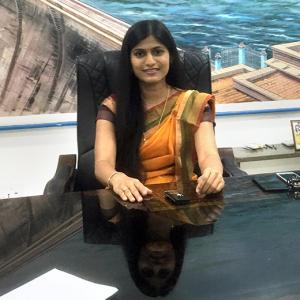