Israel is determined to take the bilateral engagement to a different level that goes beyond defence hardware and intelligence software.
Kanchan Gupta reports exclusively from Tel Aviv for Rediff.com 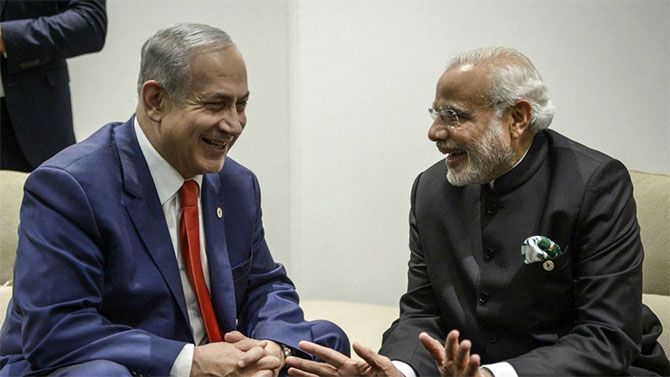 It could be sheer coincidence, not wilful planning, that Prime Minister Narendra Modi arrives in Israel on the 41st anniversary of 'Operation Thunderbolt', popularly known as 'Operation Entebbe'.

They were passengers of an Air France flight that was hijacked by Palestinian terrorists after taking off from Ben Gurion airport in Tel Aviv.

The operation lasted 90 minutes and 102 hostages were rescued.

Yonatan Netanyahu died, the only fatality suffered by the commandos. He is still remembered as the Hero of Entebbe.

He was the elder brother of Benjamin Netanyahu, Israel's prime minister.

It's a day of remembrance for the Israeli prime minister and citizens.

This year, it will also become the day the first prime minister of India set foot on the soil of Israel, ending decades of shaming and shunning by the New Delhi Establishment of a natural ally and a true friend.

In a sense, history will be made on this fourth of July by Modi's historic visit.

It will mark the end of an era when ideological posturing and vacuous morality rode roughshod over pragmatism and reality.

The last vestige of 'Nehruvian Consensus', whose dismantling began during the P V Narasimha Rao years, will be discarded with this visit.

Modi has described it as an 'unprecedented visit that will bring our two countries and people closer'.

Netanyahu has responded with the unprecedented decision to accompany Modi virtually all through his visit 'as befits the leader of the world's largest democracy'.

This is an honour rarely if ever accorded to a visiting guest.

Away from the pomp and grandeur of a State visit, Modi and Netanyahu will hold intensive and extensive talks, both one on one and accompanied by their official delegations.

It is but obvious that, to quote Modi, 'major common challenges like terrorism' will come up for discussion.

Yet it would be minimising the scope and import of this visit, which marks the 25th anniversary of diplomatic relations between India and Israel, to straitjacket it in terms of homeland and international security, both threatened by the inexorable rise of terrorism.

Nor would it be right to expect big ticket defence deals and headline-making agreements on joint counter-terrorism mechanisms.

This visit won't go that way.

Israel is determined to take the bilateral engagement to a different level that goes beyond defence hardware and intelligence software.

It wants to showcase its best achievements and these are essentially technology based.

India too is determined not to be trapped in the matrix of popular perceptions at home, subscribed by both friends and critics, of Israel as a warrior State constantly battling its foes.

It wants to seek out the best technology that helps meet challenges of the future.

Prime Minister Modi's visit to Israel signals an end to the hyphenation of Israel and Palestine which has been the bane of India's policy.

By not stopping over at Ramallah, as has been the practice till now, before visiting Jerusalem and Tel Aviv, Modi has signalled de-hyphenation and segregation.

During his recent visit to India, Palestinian Authority President Mahmoud Abbas is believed to have sought to pursue Modi to offer to mediate in the long-running dispute.

It is unlikely Modi would even raise the issue of Palestine given Israeli sentiments.

At a special briefing for mediapersons on Monday, July 3, a senior Israeli official was polite but firm in responding to a query on possible Indian mediation.

"Israel considers the peace process, indeed any political process, to be an entirely bilateral affair. We believe India would appreciate this position," he said.

The reference was clearly to India's rejection of any mediation by a third country or organisation in its dealings with Pakistan.

This puts paid to experts and opinion-makers' efforts to posit India as a peacemaker to offset the de-hyphenation of Israel and Palestine.

Senior Israeli officials in Jerusalem involved with Modi's visit and privy to what is on the agenda list five issues that will dominate the discussions and lead to agreements that will redefine the strategic partnership between two nations with shared goals and values.

The first would be cooperation in agriculture with Israel supplying irrigation and related technology that will have the potential of boosting farm sector efficiency, improving crop quality and quantity, and reclaiming arid land.

The second would be in a large measure linked to the first by way of Israel providing India with cutting edge technology on water management, recycling and desalination.

This would also include technology to control the pollution of Indian rivers.

Together, agricultural and water technology can help India ensure food and water security for its teeming millions.

Both are concerns that will increasingly loom large in coming years.

Third on the list is cooperation in space projects.

Israel has been partnering India in its quest to be the frontrunner among emerging powers in developing space technology, especially in the domain of satellites.

The successful launch of nano satellites, which represent the future, is an outcome of this cooperation.

The idea is to take this cooperation between ISRO and Israeli Aerospace to an altogether new level.

Israel has technology which it says it will be more than happy to share. Three agreements on cooperation in space sciences and technology alone could result from this visit.

Fourth on the agenda would be cyber security.

India, like every country, faces the threat of cyber crime and cyber terrorism. The threat increases with each passing day.

With a not-so-successful record of cyber security, India needs a dependable ally who can help build firewalls of the future.

Once again, the transfer and infusion of Israeli technology, recognised as among the best in the world to deal with cyber security, is being aimed at.

The Joint Statement to be issued after Modi's meeting with Netanyahu will have a reference to cooperation in this area.

More important, work will begin on a cyber security architecture with Israeli assistance.

Last, though not least, both India and Israel are keen to enhance people-to-people contact by pushing tourism, showcasing culture, promoting scholarships and creating connectivity.

India has agreed to set up a cultural centre in Israel. This part of the relationship will be work in progress over a period of time.

Modi is the first Indian prime minister to visit Israel, but it is not his first visit to this country.

As chief minister of Gujarat he visited Israel and carried back with him strong impressions of Israel's remarkable ability to innovate and effectively apply that innovation, especially in agriculture and water management.

It stands to reason that as prime minister he would be keen to secure India's access to Israeli innovation and its application to deal with chronic and emerging problems.

If New India is to be technology-driven, then both realism and pragmatism suggest the forging of an India-Israeli strategic partnership. 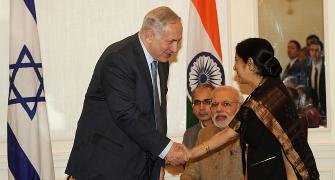 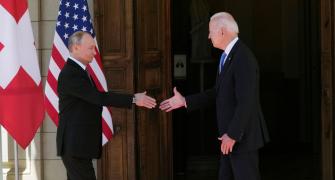 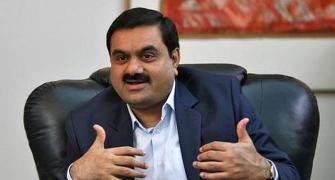 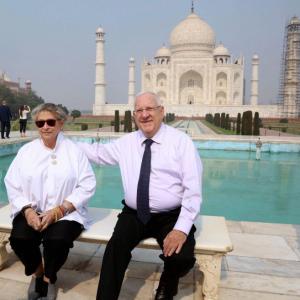