Members of the Opposition in the Lok Sabha on Wednesday raised concern over amendments to the Unlawful Activities (Prevention) Act.

Among them was Trinamool Congress MP Mahua Moitra, who in an impassioned rebuttal said, 'Why are we in the Opposition are always at the risk of being called anti-national every time we disagree with this government on issues of national security, on issues of law and order, on issues of policing?'

Opposing the bill, she said when the National Investigation Agency itself was under a cloud, there is also apprehension of the agency being misused for political vendetta.

'Features of the bill are anti-people and anti-Constitution...it is a very dangerous act,' she said. 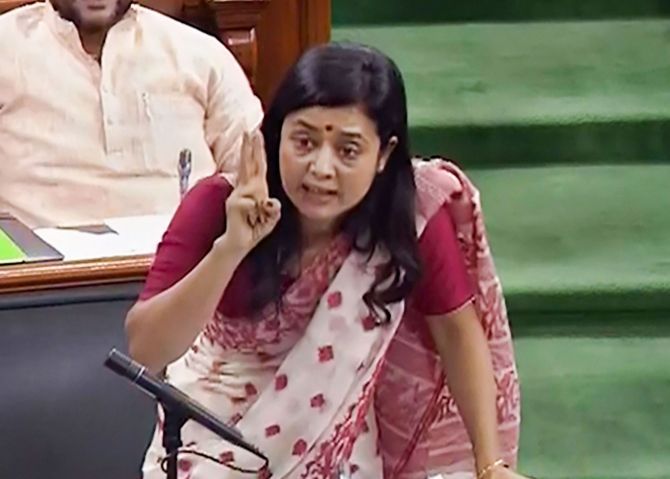 I rise today in the absence of the honourable home minister, about which I am quite sad, but I hope he is listening somewhere. I rise today to vehemently oppose the UAPA (Amendment) Bill, 2019.

Warren Buffet is said to have once said, "If a cop follows you for 500 miles, you're going to get a ticket."

The current dispensation at the Centre needs to be following this very reasoning. If they want to target someone, they will get them somehow -- on some law or the other, on some lacuna or the other.

Opposition leaders, rights activists, minorities, anyone who doesn't agree with the homogeneous idea of India, that this government is trying to thrust upon us, is at risk. Agar inke saath ho toh bhagwan, na ho toh shaitaan. Yeh toh nainsafi hai (Those who are with you are gods. Others are devil. This is not correct).

In the short time that I have been privileged to be here in this House, I have experienced it first hand.

Each time we oppose a bill, bring in a cut motion or move an amendment, and these are purely hypothetical exercises that given the brute majority that this government enjoys, we run the risk of being labelled 'anti-national'.

When an honourable member opposed the introduction of the UAPA bill, no less a person than the honourable home minister leaned forward and said, 'Soch lijiye, virodh karna hai kya? Wapas rehna hai? (You think about it, do you want to oppose? Do you want to come again here?)'

The honourable minister sits in Sardar Vallabhbhai Patel's chair. Patel was the unifier of India. He once said, "It is the prime responsibility of every citizen to feel that his country is free and to defend its freedom is his duty."

It is not enough to build the world's tallest statue in Sardar Patel's honour. We must all of us try at least to stand as tall as him. Why? Why do I see a sense of menace? Why ever since I have been elected and since my maiden speech do friends and family call me and tell me 'to be careful' because 'they'll somehow get you'? Why do I feel this?

Every time we disagree with the government, its troll armies, its propaganda machinery work overtime to call us terrorist sympathisers, 'sickular' and anti-national.

Madam, I will fight my case. I will stand here. Just because they have 353 does not mean they will shout us down. I will stand my ground. The honourable member does not talk the point. You quoted the number, he did not. I have not said anything about any single member.

I said the propaganda machinery and the troll army. It is unfortunate that you need three ministers from the treasury benches to stand up and fight with me.

I welcome the honourable member. I'm sure Mr Shah will have the grace to hear me out. It is a matter of great shame that it needs three ministers to handle me but I will continue.

To paraphrase both the Mahatma and George Orwell, 'Even if you are a minority of one, the truth is the truth' and 'In a time of universal deceit, telling the truth becomes a revolutionary act'. Sab tere siwa kafir, akhir iska matlab kya/ Sar phira de insaan ka, aisa khabt-e-mazhab kya (everyone is a traitor except you, what does that mean? What kind of religious passion is this that makes lunatics out of people?). Hum ne soch liya, virodh hum wapas nahi lenge (We've decided not to withdraw our opposition). I will stand here in this hallowed chamber and spell out my opposition.

Sir, this is just a ploy to interrupt my speech. Please keep the House in order, Sir, I beg you, I beseech you. Like I said, 'Even if you are a minority of one, the truth is the truth' and 'In a time of universal deceit, telling the truth becomes a revolutionary act'.

Sir, before this I spoke through the madam chairperson and now I'm speaking through you. I'm only following parliamentary procedure. It is unfortunate that the treasury benches speak to disturb me and I will take an extra three minutes.

I will spell out my opposition not just to this Bill, not just to the treasury benches but to all the people of India who may be listening.

This country still has people that appreciate nuance, it still has people who have not degenerated into this mindless world of black and white, where either we can be pro-government or be anti-country. All of India does not believe this even if members of this House may.

So it is possible to stay here, and be anti-government and still be pro-India. And that's the space I speak to represent today.

Let me now go through this bill and point out what is wrong with it. I will try to make it as simple as possible, without the legal words, so that ordinary citizens may understand this.

According to this amendment, honourable speaker, that is just the point -- you have hit the nail on the head, honourable speaker. This bill seeks to do one thing -- to designate individuals as terrorists without due process. Kal humein bhi kar sakte hain isiliye hum bol rahein hain (tomorrow they can do it to us, that's why we're voicing our protest). That is exactly what this bill is trying to do.

There are two amendments which are extremely worrying, I will go through both of them. The first is the amendment, which is Clause 5(25),which enables the NIA to be able to go to any state and to arrest, and cease and search properties without the permission of the state DGP (director general of police), or without even the knowledge of the state DGP.

Now this is completely against the federal structure of our country because if you see in List I, you are trying to give the NIA policing power under (the) IPC (Indian Penal Code) and other special Acts.

So in this case, when the NIA itself is under a cloud, you are giving it more policing powers. Even the CBI, when they go in to investigate, they work with the state police. We are a federal structure. States have a certain degree of sovereignty. In this case, if the BJP (Bharatiya Janata Party) is not aware of this and the NIA coming, this is a power which completely goes against the grain of the Constitution.

The second point, which is the most dangerous amendment, is Clause 5(35), which is exactly what you are referring to, that you are designating individuals as terrorists, in addition to the existing terrorist organisations.

In Section 35, you are creating a whole different test of who is a terrorist -- individuals involved in terrorism or who promote or encourage terrorism.

Now the UAPA in it's current form already allows you to take all actions possible against individuals who are involved in terrorism. You have Section 16 which gives you the death penalty and life imprisonment. You have Section 38 to 48 which criminalise membership, and supporting and raising funds.

You are talking about the UN (United Nations) Security Council, saying in the Statement of Objects and Reasons that we have to be in line with international obligations.

The UN Security Council Resolution 1373 lays out very clearly the process for freezing funds. In this case, there is nothing laid out, there is no process. It's not even following legal procedure, forget about following due process.

So any government in India that has taken away the safeguards for life and liberty that the Constitution has given to us, has not been able to survive without paying a heavy price.

'Lagegi aag apkehi ghar mein/ Yahan pe sirf humara makan thodi hai (The fire will gut your house too. Not that only I have a house here).'

So I urge the Speaker to tell the honourable minister to please withdraw this bill. This is anti-federalism, anti-Constitution and anti-people.

This is a very dangerous Bill. I urge you to please take it back. Thank you. 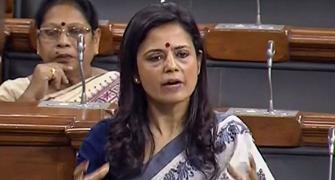 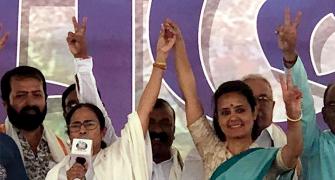 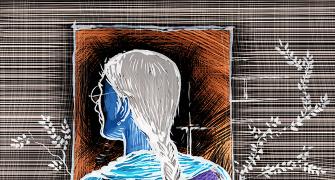 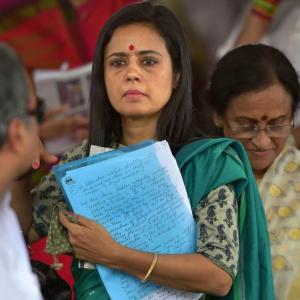