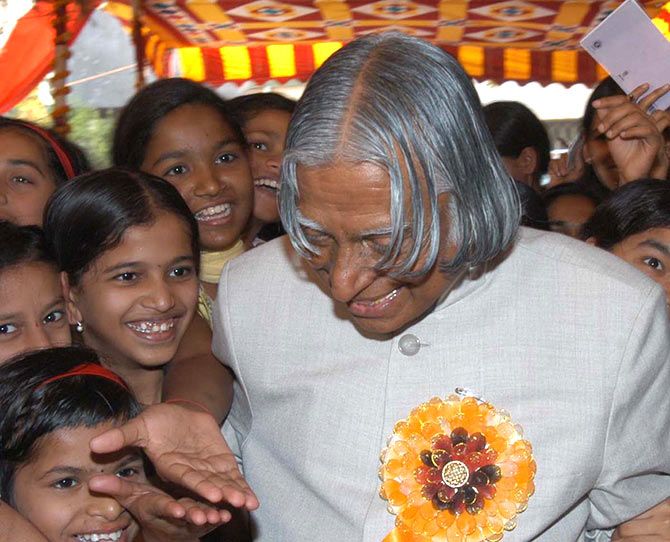 'President Kalam would always say -- this was one of his pet sentences -- that "If you don't do anything, there will be no difficulties but if you do things, there will be difficulties. You have to overcome them. Don't be afraid of difficulties".'
Remembering The People's President on his third death anniversary.
S M Khan, who served as President A P J Abdul Kalam's press secretary during his tenure, remembers how India's most popular person became his teacher. 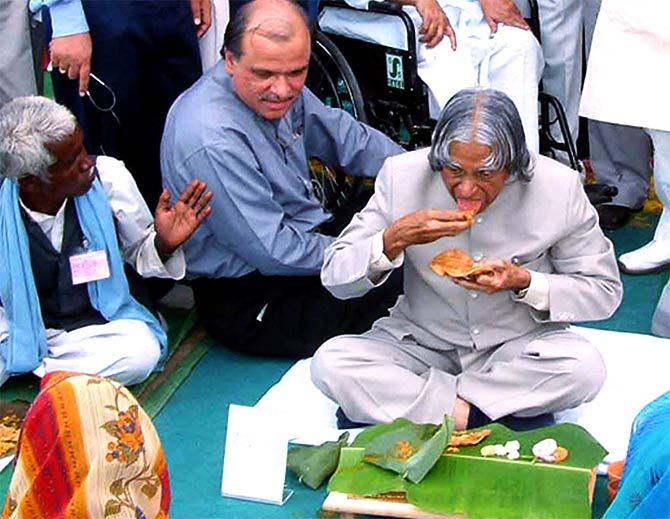 Some people are popular in their state.

Some people are popular in their religion or their caste or among their fellow language-speaking people.

But President Kalam was one person who was popular across India among all kinds of people, irrespective of their state, religion, caste, creed, village or city; irrespective of whether they were youth or elders.

Nobody had anything negative about him.

I have not found any other personality in any field who was so popular in the three to four decades at least.

He was a multifaceted personality, a statesman, a visionary, scientist, teacher, administrator and, above all, a good human being. He was a humanist to the core.

He had a very soft corner for the youth, for children and for students. He made it a point to meet them wherever he could, for as long as he could.

He would encourage them to ask questions and discuss his answers at length if needed.

He never dodged a question. Even if they asked him things like why his hair was so long, he would answer patiently.

Once a student asked him why he was not married. His reply was, 'Look, I am not only not married, I am also a Brahmachari.' Then he laughed and said, 'I did not find time to marry. I was so busy in my scientific work.'

He had a very interesting sense of humour.

When a student asked him about India's population problem, he immediately replied. 'You are asking questions to the wrong person. I am innocent.' Then, of course, he gave a serious reply.

He was equally at ease with students, with Members of Parliament, with politicians, with technocrats. He could interact with anyone.

He was as comfortable with Constitutional and legal issues as he was while talking to children.

I joined him as his press secretary on August 5, 2002, 10 days after he had become President.

In his very first meeting with us, he gave his vision document to make India a developed nation by 2020.

He was committed to nation building.

He wanted to make Rashtrapati Bhavan a people's place, where the voice of the millions of downtrodden people of India should be heard and action taken.

As per his wishes and mandate, the President's house became a people's place and he became a People's President.

He was very open to suggestions.

From the very beginning, a lot of students used to come to meet him.

I thought that they should leave with a souvenir from him and he immediately agreed.

We got cards printed in English, Hindi, Urdu, Tamil, Telugu, Bengali, Malayalam and other Indian languages, with his photograph and a slogan he had specially coined that I am mentioning below.

He used to sign these cards whenever he had the time but if he didn't, we would give out unsigned cards as well.

We gave away lakhs of these cards as mementos during the five years that he was President.

He was particular about people's ideas, what they were saying, how to respond to them and how much we could we implement of what they suggested.

He was very keen on solar power and would invite solar experts to share their thoughts.

He wanted to make Rashtrapati Bhavan a model for solar energy, so he began an experiment whereby the needs of the Herbal Garden and Mughal Gardens were taken care of through solar power.

Incidentally, the Herbal Garden -- which was planted during his time -- was the result of an idea he got from herbal scientists and agriculturists.

He was also passionate about wind energy and nuclear energy. He would always say that solar and wind were the purest forms of energy.

He was always studying and worked most of the time, but did not believe in ceremony, formality or protocol.

In fact, it was difficult for people to understand this during the first six months of his Presidency; later, they became used to it.

His officers understood that he was not a protocol-driven person.

In fact, as far as possible with his interactions with people, he would avoid the use of the term 'Your Excellency.'

He was the first President in the world to make powerpoint presentations and that became a talking point throughout the international community.

He used to make his own powerpoint presentation whenever he delivered important speeches for which he used to work very hard himself.

Also, during his meetings with foreign dignitaries and important heads of State and whenever he used to go abroad, he used to make powerpoint presentations.

He even made a powerpoint presentation to President Bush when he visited Rashtrapati Bhavan with his delegation.

At that time, nuclear energy talks between India and the United States were at its peak.

President Kalam made a very good presentation for about half-an-hour about India's energy requirements, how nuclear energy can help India and what kind of agreement we could sign with the US.

At the end of the presentation, I remember President Bush commenting, 'Sir, I need to be a scientist to understand all this.'

As everyone knows, President Kalam was very tech-savvy.

He wanted to connect with as many people as he could. Even as President, he would announce his e-mail address. He would tell people that they could ask him questions and they would get a reply in 24 hours. (He participated in a chat on Rediff.com where he interacted directly with children. You can read the transcript here.)

His lectures would be available on his Web site.

He was a teacher for everyone, including the media. He used to say that the media had a very important role to play in democratic India. But he was unhappy that the media did not do adequate research.

In fact, whenever he addressed the media, that was his that was his main point... that they did not do research. He would always tell the media to set up a research cell in every media office and every electronic channel because sometimes their facts were half-baked, leading to a half-baked story. 'You should be very clear about your facts and your research team should be there pumped to give you everything,' he would tell them.

His style of talking was like that of a teacher and that's how he spoke to his officers as well... He would always ask, 'Have you understood? Am I clear to you?'

He was very comfortable with and considerate about people, even with officers. He would not put them through any unnecessary strain.

He would expect competence and good output, but would not put an unnecessary burden on them.

He was a pure vegetarian and his only requirement as President was that he would like to eat simple food. He ate whatever the cook made.

He had this habit of having his dinner very late, around midnight. 'Don't worry about me,' he would say. 'Leave the food at the dining table and I will take it on my own.'

According to protocol the cook could not leave till the President had eaten, but he would force the cook to leave at 10 pm when his shift ended.

Whenever there was a banquet or an event at Rashtrapati Bhavan, he would ensure that everyone's taste was taken care of. He would always ask whether non-vegetarian dishes had been prepared to cater to the non-vegetarians who would be present on the occasion.

When we went on tours, he would tell us to eat and he would eat later in his room. He never asked people to wait for him for a meal.

His tours would be packed; he would have at least 10, 12 engagements a day.

If he was delayed anywhere, he used to cancel lunch or dinner to make up for lost time.

That was the only thing that was under his control since his schedule was so packed. He never took rest in between engagements.

His staff would think (laughs) agar delay hoga toh lunch gaya (If there is a delay we are not going to be able to have lunch).

Once I remember we were on a tour and there was not much to do at one point so all of us (those who had accompanied him on the tour) were sitting and chatting. He came and asked us what we were doing. 'Sir,' I said, 'We are not doing anything.'

He was very humble and didn't forget people.

During his career, he was in Trivandrum for a very long time. He was posted at Thumba as a rocket engineer and stayed in a hotel in Trivandrum.

During his life, he never stayed in a home. He stayed either in a hotel or in a guesthouse belonging to the department he was working for.

He used to get his shoes polished by a particular cobbler. When we were in Kerala, President Kalam invited that cobbler to Raj Bhavan and he spent time with him.

Actually, he never maintained a house of his own. He never got it allotted and never bought any furniture or anything for his house. He used what was available.

His birthdays too were simple. He would never stay in Delhi then because if he was there a lot of people would come and visit him and he wanted to avoid that.

On his birthdays, he would be in Arunachal Pradesh or Nagaland or West Bengal or somewhere, touring. He would have programmes one after the other and if, somewhere, people came to know it was his birthday, they would order a cake and he would cut it.

He would never accept anything but flowers as a gift.

President Kalam was a very straightforward person. If he did not like anything, he would say it upfront.

He never got angry but he if he felt something was not correct, he would say it plainly.

He was very clear and he would make his point very politely and calmly.

I met him last on July 22. He was full of ideas and full of energy. He asked me about my new assignment, what changes I was going to make and what I was going to do differently. 'How are you going to make something new?' That was the question he would always ask.

He always placed challenges in front of people.

Whenever we went on a tour, he was always moving, always working, always taking risks. He was a very courageous person. If he had to reach a particular point, he would travel even in fog against the advice of the Indian Air Force. This is a small example of how he would take courageous decisions when confronted with a problem.

He used to say that except when you were sleeping for six, seven hours, don't sit idle for a minute.

That was his motto of life.

S M Khan (seen in image above, in the blue shirt), spoke to Savera R Someshwar/Rediff.com. 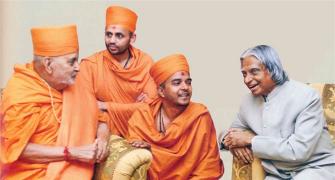 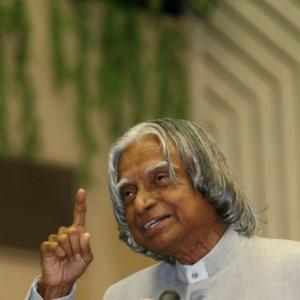