With a staff in one hand and the other on his granddaughter's shoulder, the old man briskly takes the lead as the sun breaks over the horizon. 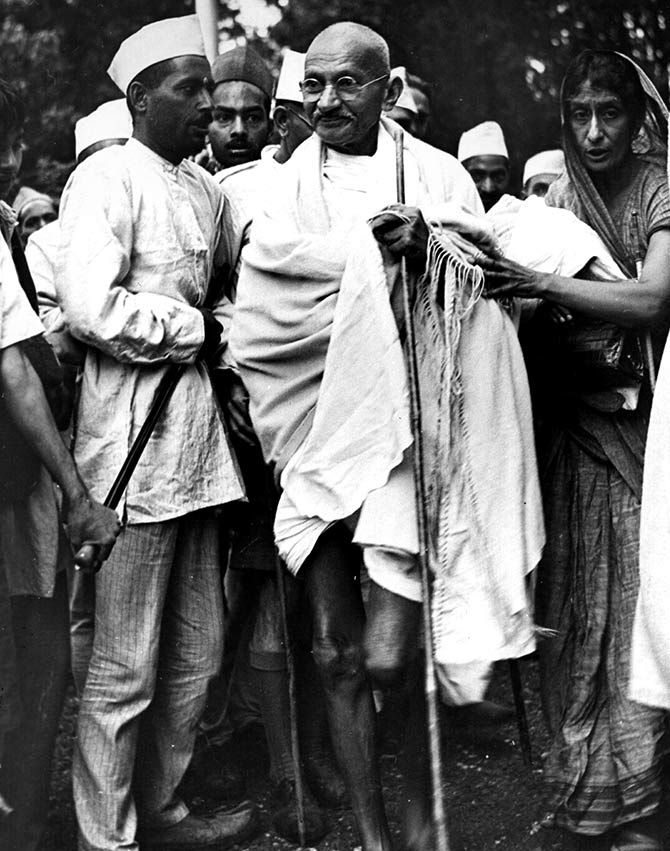 Phillips Talbot, then the South Asia correspondent of the Chicago Dailyduring Independence, was an eyewitness to history. He traveled to Noakhali, present day Bangladesh, and spent time with Mahatma Gandhi during the communal violence there.

In a fascinating letter to a friend in New York, he conveyed his impressions of his encounter with the Mahatma.

Then president emeritus at the Asia Society, New York, Mr Talbot kindly granted Rediff On The NeT -- as Rediff.com was known in 1997 -- permission to publish this letter from his archives on the 50th anniversary of Independence.

Another glimpse of a man of whom Albert Einstein said: 'Generations to come will scarce believe that such a one as this ever in flesh and blood walked upon this earth.'

By now he has established a routine. Rising at four, he finishes his morning prayers, takes a glass of hot water containing honey, and works at correspondence for two hours or so until dawn.

At 7:30 he sets off on the day's walk across newly plowed dew-soaked fields to the next village on his itinerary.

The Gandhi march is an astonishing sight.

With a staff in one hand and the other on his granddaughter's shoulder, the old man briskly takes the lead as the sun breaks over the horizon. He usually wraps himself in a hand-woven shawl, as the January mornings are cold enough for him to see his breath.

But he walks barefooted despite chilblains. This is a fashion he started in order to relieve a blister, but continued because he liked the idea of walking as Indian pilgrims normally travel.

Clustered about him is his immediate party: His Bengali interpreter, a professor of geography at Calcutta university; a Sikh attendant who fawns as much as Gandhi will permit; a retired engineer-turned-swamy and one or two youths. The dozen Indian press men who are following this trek, walk behind.

Sometimes this little body of the faithful, like other truth-seekers before them, sing of God as they walk. His name here is Ram.

A squad of policemen, detailed (against repeated protests from Gandhi) by Muslim League Premier H S Suhrawardy to accompany and protect the Gandhi party, mix with the group.

As the sun begins to climb, villagers from places along the way join the trek. They come by twos and fours or by dozens and scores, swelling the crowd as the snows swell India's rivers in spring. They press in on the old man, while their children dance around the edges of the moving body.

Here, if I ever saw one, is a pilgrimage. Here is the Indian -- and the world's idea of sainthood: a little old man who has renounced personal possessions, walking with bare feet on the cold earth in search of a great human ideal.

Sometimes a new arrival drops to the ground in front of Gandhi in an effort to touch those feet, but the big Sikh gently lifts up the man. 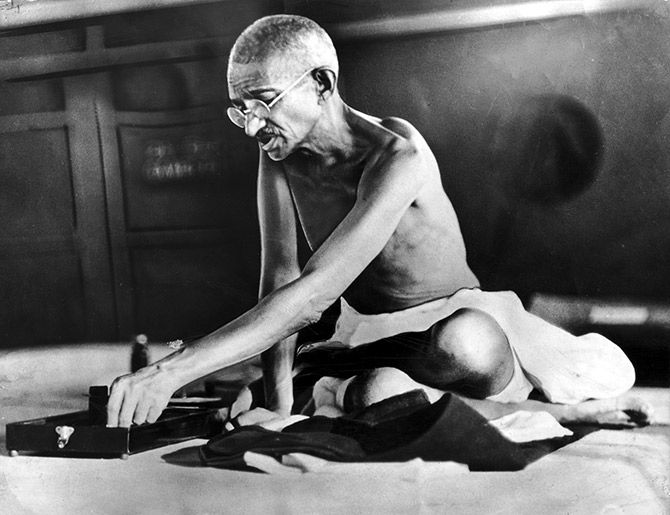 As Gandhi nears the day's destination, another crowd from that village surges toward him, singing their own hymns, waiting to greet and welcome him. They lead him to his new hut, where three or four peasant women give him the special Bengal greeting, a high, warbling trill that I have heard nowhere else.

This is the Gandhi march, one of two highlights of the Mahatma's day and the act that has caught the imagination of many co-nationalists, and particularly co-religionists.

After arriving at the new village, Gandhi rests while his granddaughter bathes his feet. He meets his hosts.

Then, at 9:30 he gets a massage and bath, and at 11 he takes a meagre lunch which is usually a boiled paste of scraped and ground vegetables, moistened with a glassful of hot milk.

After another rest (during which he indulges himself in his widely known 'nature cure' consisting of mud plasters on his forehead and stomach), Gandhi works at correspondence and interviews until time for evening prayers.

In his daily prayer meeting Gandhi meets the world; this is his best platform. Welcoming all who will come to his open-air meeting, he proceeds through a ritual that reveals his eclectic faith.

One by one, the audience hears an extract from Buddhist scriptures (suggested by a Japanese monk who stayed at Gandhi's ashram until he was interned at Pearl Harbour); several recitations from revered Hindu writings; ashramite vows (truth, nonviolence, nonstealing, celibacy, nonpossession, removal of untouchability, etc.); readings from the Quran; a Zend Avesta (Zoroastrian) quotation; a hymn which may be Hindi, Bengali, or some Christian song in translation; and a joyous tuneful recital of the name of Ram, to the accompaniment in cadence of hand clapping. 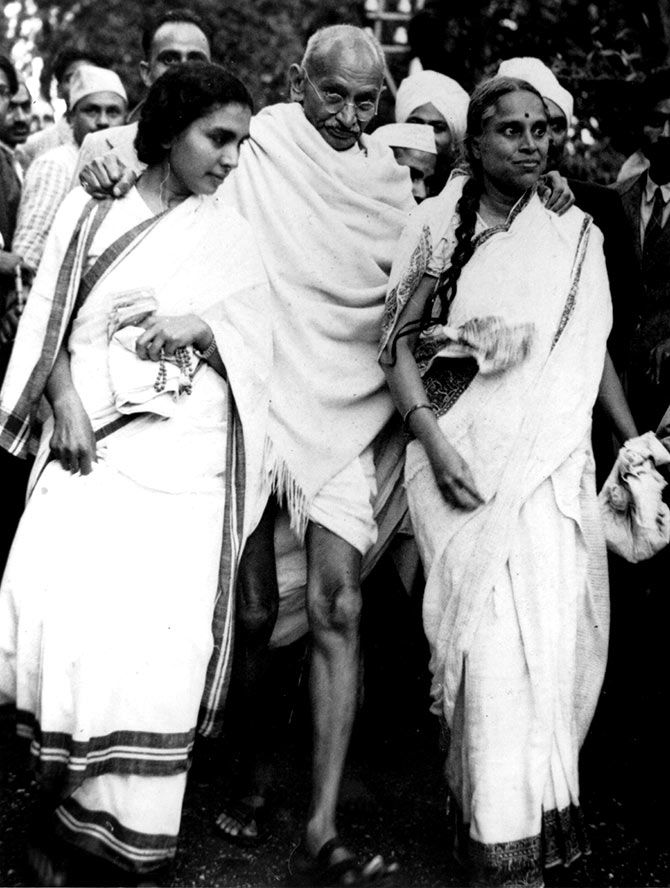 IMAGE: Mahatma Gandhi leaves Maor Ville, his Simla residence, during the Leaders Conference. He is helped to his car by his doctor Sushila Nayyar, right, and Sushila Ben, left, and accompanied by his private secretary Mr Pyarelal. Photograph: Fox Photos/Getty Images

This devotional exercise is followed each day by a talk in which Gandhi gives expression to almost any thought exercising his mind. Listeners may hear of village sanitation, women in purdah, Hindu-Muslim relations, reactions to the latest Muslim League resolution, a hint as to what new course the Congress will adopt, and observations on London's policy. Taken together, reports of these after-prayer talks furnish perhaps the best guide to the trend of Gandhian thought. These reports, I might add, are authentic.

While his Bengali interpreter translates his remarks to the village crowd, Gandhi sits crosslegged on his small platform, penning out the authorized English version of what he has said in Hindi. He writes in third person an refers to himself by his initial. 'Addressing the prayer gathering at Bansq this evening, G. said...'

After the prayers, Gandhi takes another brisk walk. Except on his weekly day of silence, he uses this exercise period to talk with villagers and visitors who half-trot at his side. Then Gandhi returns to his hut for another footpath and more correspondence and interviews. Later one of the Indian pressmen arrives to read the day's news to him. Gandhi usually sleeps at about 9 o' clock.

Gandhi's decision to bury himself in this nearly-unreachable corner of India at a critical hour in India's destiny distresses even some of his closest associates. Speaking for them, Jawaharlal Nehru wrote Gandhi a few weeks ago in this vein: 'One hardly knows what to say to you. You are needed in Noakhali, but you are also needed in Delhi, in Wardha, and everywhere.' Yet in the opinion of his associates nothing in the outside world will draw Gandhi from his immersion in rural East Bengal so long as he feels his task there unfinished. They know, of course, that many people fail to understand why he stays there.

Two answers may be suggested. Politically, Gandhi has concluded that Hindu-Muslim bitterness threatens to postpone Indian freedom, and perhaps undercuts the role India might otherwise play in Asia.

Having failed to bring the two communities together through high-level negotiation, he is testing his nonviolence and seeking a solution at the familiar village level.

As a Hindu, moreover, he is incapable of ignoring the threat to his culture that arises from forced conversions. Wherever they occur, he must stamp them out.

The first objective, obviously, can be attained only by winning the support of Muslims. Gandhi has consciously set out to do this. As the primary step, he is working to lift Hindu-Muslim relations from a religious to a political plane.

Time after time, Gandhi has told Bengali prayer audiences that Hindus and Muslims must settle their dispute or be saddled with long-continued foreign rule. He seems to expect an early end of domination by war-weakened Britain, but to fear genuinely that internal dissension might open the door to some other agent of foreign imperialism, perhaps in the guise of a UNO trusteeship. 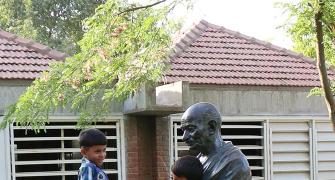 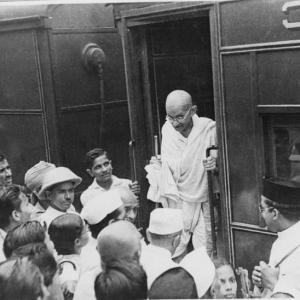 In search of Gandhi