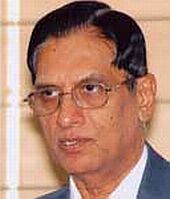 Zakia Jafri's pursuit of justice has landed her at the doors of a man who is a devout Hindu and has few diplomacy skills to speak of. Raghava Krishnaswami Raghavan, 69, former director of the Central Bureau of Investigation, was appointed by the Supreme Court to head the Special Investigative Team in 2008 mandated with inquiring afresh into the 2002 Gujarat riot cases.

Why was a fresh enquiry necessary? Among the colonies attacked in Ahmedabad was the Gulbarg Society where former Congress MP from Rajkot Ahsan Jafri was killed.

Jafri's widow Zakia pleaded before the Supreme Court that she was unable to get justice for her murdered husband because no one in Gujarat would listen to her -- her husband, she said, had called Chief Minister Narendra Modi for help that never came.

It was this plea and others like it that the SIT is investigating on directions from the Supreme Court. So it is pursuing justice on behalf of the highest court in the land in a case that has significant implications for the future of communal relations, both in polarised Gujarat and the rest of India. So Raghavan is, quite literally, in the hot seat.

In some ways, he should be used to this, given his chequered career. If there is one consistent thread running through it, it is that as an IPS officer from the Tamil Nadu cadre, he has never bowed to political pressure. In Tamil Nadu, this is no mean achievement. This is the state in which IPS officers refer to the chief minister as "honourable chief minister" even when talking to their wives about their day at work.

At his first posting in Nagapattinam as an assistant superintendent of police, he was transferred overnight because he "literally caught a politician with his pants down" during a raid, as he told an interviewer. The transfer was cancelled, however, after locals appealed to the chief minister, saying it was unfair to punish Raghavan.

His big trial by fire was on May 21, 1991 when, as director of the Tamil Nadu Fire Service, he was asked to supervise security arrangements at Sriperumbudur for Rajiv Gandhi's election rally because the zonal inspector-general was on leave that day.

The suicide bomber, Dhanu, struck. By 10.30 p m, the meeting ground was a pool of blood. Raghavan was on the spot, making sure nothing was moved. Crucial evidence such as the camera belonging to amateur photographer Haribabu (recovered from the site), which led the trail to key conspirator Sivarasan, was collected at Raghavan's initiative.

The Verma Commission, which investigated security lapses leading to Rajiv Gandhi's assassination, charged him with failing to control access to the former prime minister. He was denied a promotion and refused empanelment for selection to any Central government post. Later, he was made to wait on the sidelines for CBI directorship because a colleague appealed to the Central Administrative Tribunal, saying his appointment was "illegal, arbitrary and unjust". He finally got the job following high court intervention.

Raghavan's record at CBI suggests he brought some skill to the organisation. It was under him that the cricket match-fixing scandal, which involved gamblers who determined the outcome of cricket matches for stakes running into millions of dollars, was busted.

The case against Jayalalithaa accepting $300,000 (around Rs 1.35 crore) as foreign contributions when she was Tamil Nadu chief minister also reached conviction under him (Raghavan had investigated the charge as vigilance chief in the state while the DMK government was in power).

As for diplomacy, about reforms in the CBI, he said in an interview: "What is the point of assailing the CBI when it is not given the autonomy to perform properly? There is no CBI Act as yet, although it should have a separate legislation.

"I think that the director of the CBI should report directly to the Supreme Court and work independently and autonomously, like the Election Commissioner. The term for the director should also be longer than the current two years. Both those who defend and criticise the CBI, are they willing to make these changes?"

When the Supreme Court appointed him SIT chief, Raghavan's first intervention was to criticise the non-government organisations that were investigating the Gujarat riots with more zeal than rigour. He had harsh words for activists like Teesta Setalvad whom he accused of misrepresenting events and tutoring witnesses. But equally, it was SIT that was responsible for investigations that led to the arrest of former minister Maya Kodanani and Vishva Hindu Parishad leader Jaideep Patel.

Raghavan is clear that it is justice he believes in, not religion. He carries a picture of Balaji in his wallet and prays five times a day, but he doesn't think that makes everything done in the name of Hinduism right.

SIT process is Modi's chance to redeem himself