'There is more likelihood of dying from lightning than from vaccine induced blood clots.'
Rashme Sehgal reports. 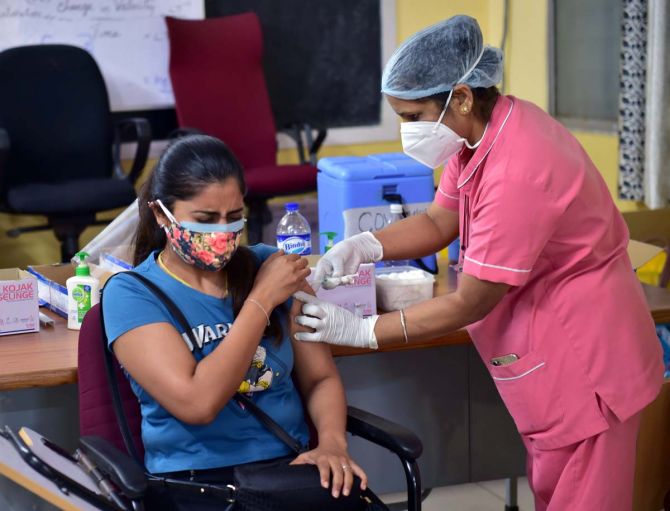 There is no disputing that vaccinations are the most effective tool to control the coronavirus pandemic.

Some people who have been vaccinated can suffer mild side effects after taking the vaccine such as headache and fatigue.

This has been highlighted in a study conducted on the COVID-19 Astra Zeneca vaccine whose findings were published in the Lancet Infectious Diseases Journal which reported that one in four people experienced mild, short level, systemic effects.

But there are a few who are known to suffered severe adverse effects.

Eighty medical staff at a super speciality hospital located in New Delhi recently tested COVID-19 positive despite some of them having taken two jabs of the vaccine.

One of their surgeons who had been with the hospital for three decades succumbed to Covid on May 8 despite the fact that he had received both his vaccine shots, the first in January and the second in February.

Before being put on a ventilator, he had told a colleague, 'I will come out of this. I have been vaccinated. I will come out.' Sadly, he did not recover and last Saturday morning, the 58-year-old surgeon succumbed to Covid.

He is one among several persons who have died after taking the second shot.

Captain Anand Nayyar, a senior citizen living in Delhi, went to Rockland Hospital in New Delhi on April 14, confident that the second jab would provide him protection from the virus.

Two hours after receiving the vaccine, he developed high fever.

His wife Dr Kanta Nayyar gave him a dose of paracetamol and in consultation with a specialist thought it advisable to treat him in the house, confident he would pull through.

"Since he was showing all the COVID-19 symptoms," says Dr Nayyar, "we got an RT-PCR test done. Both Anand and I tested positive. I still have no idea how we got it. Anand had not stepped out of the house for several months Nor did I."

"We may have picked up the infection at the hospital or maybe it was a reaction to the vaccine. He had strong lungs and was on the road to recovery, but on May 3 he succumbed to the disease."

"I am now filled with regrets. In retrospect, I feel the government should have warned us about possible side effects we could suffer after taking these jabs instead of just going on and on about the efficacy of these vaccinations," says Dr Nayyar.

Dr Nayyar believes her husband was not the only individual in her family who suffered adverse effects from the vaccination. Her husband's nephew, who was living in Gurugram, died in early April after having received the first shot.

"The morning after taking the shot he woke up at 5 am. An hour later, he decided to go back to sleep and never woke up. He was in his seventies and though he was on tranquilisers he was not known to suffer from co-morbidities," Dr Nayyar says.

She herself has taken two doses of the vaccine, but only suffered minor side effects. 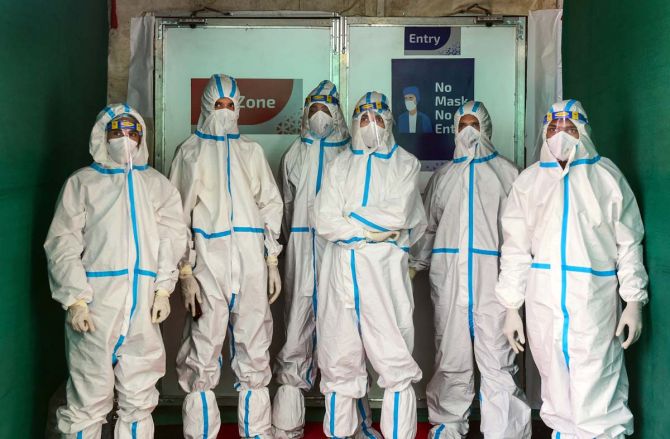 Though there is some information available of COVID-19 having infected doctors and healthcare workers who have received both the vaccination shots, little documentation has been conducted of those who have died after taking a vaccination.

Families shellshocked by the death of a loved one are usually unwilling to go on record.

In several cases, while families have complained that their family member suffered a strong reaction, called Adverse Effect Post Immunisation (AEPI), there has been little follow up so far.

Doctors point out that in the majority of cases immunisation is followed by headache, mild fever and nausea, but there are have been cases where people have suffered AEPI and have had to be hospitalised.

Statistics collated by the health ministry show that from the 381,000 health care workers who were immunised in January, 580 developed AEPI and had to be admitted to a hospital from which three cases died.

One was a ward boy at a hospital in Moradabad who was administered the vaccine and who died the following day. His family blamed the death on the vaccine, but the Uttar Pradesh government said that man died due to septicaemic shock and cardiac arrest.

A case of death after vaccination was also reported from Bellary in Karnataka where a 43-year-old man died within 48 hours of being vaccinated.

The state government maintained that the cause of his death was anterior wall infarction with cardiopulmonary failure. 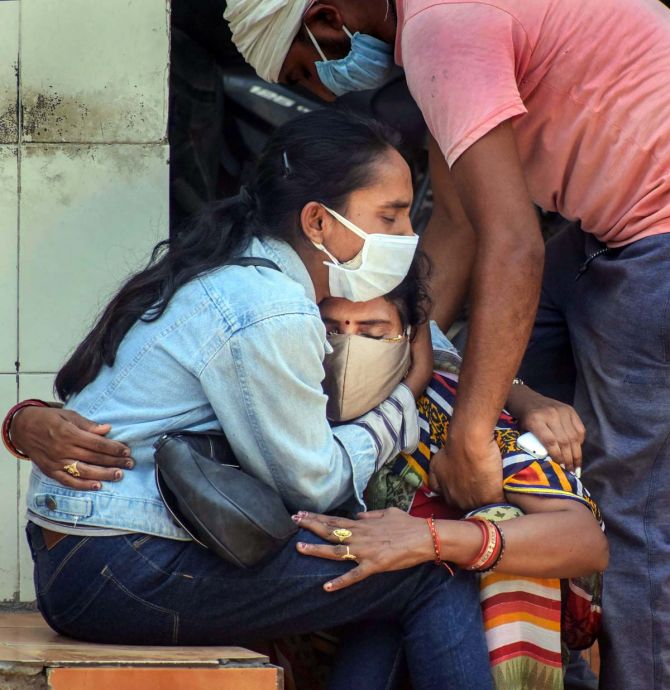 No one is doubting the veracity of the health ministry's investigation but several families who have lost a dear one feel that they were not given sufficient warning about the possible fallout an individual could have after the vaccination.

In mid-April a driver and his wife received their first jabs in a hospital in Ghaziabad.

Twenty four hours later the driver died. His family members insisted that he be taken back to his village near Ranchi for his last rites and they hired a van to take him back to his home.

"No one gave us any prior warnings that such a thing could happen. We are all in a state of shock," says a relative Ajay who works as a driver in Delhi.

Senior Supreme Court lawyer Shanker Das's family insist that he suffered from no co-morbidities, but he died after taking a vaccine shot administered on the Supreme Court premises in April. They are awaiting the results of a post mortem to find out the exact cause of his death.

Responding to the deaths of COVID-19 vaccine recipients, the All India Drug Action Network recently released a statement that there needs to be a thorough investigation of each of these deaths, with information being shared transparently with the public.

The AIDAN statement adds that all vaccine beneficiaries must be screened comprehensively for morbidities and conditions which are contraindicated for the vaccines. 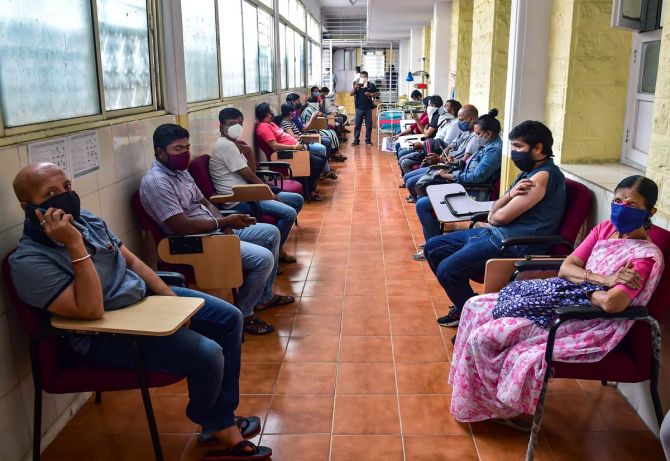 IMAGE: Citizens wait in the observation room after taking the COVID-19 vaccine in Bengaluru, May 16, 2021. Photograph: Shailendra Bhojak/PTI Photo

Meanwhile, the health ministry posted a report on its Web site in mid-March which was a follow-up of the causality assessment results of eight cases who had suffered AEFI following COVID-19 vaccination.

Public health experts criticised the health ministry report as being contradictory, especially since it emphatically stated that they had found 'consistent causal association to vaccination' in three of the cases.

Several health experts stated that a serious health issue could not be dealt with in such an 'inept' manner. This is why surveillance for adverse events, thorough investigation and complete transparency. is vital.

The health ministry informed Parliament during the Budget session that 8,483 adverse events (AEPI) had been recorded post vaccination as of February 4. The statement did not elaborate on of what the nature of these adverse events was nor were they categorised according to the level of the health risk. 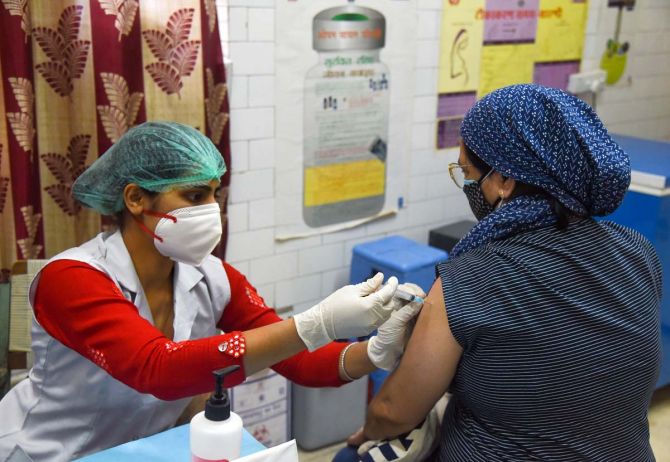 IMAGE: Vaccination at a government dispensary in New Delhi, May 16, 2021. Photograph: ANI Photo

Public health activist Malini Aisola, who is in touch with families who have suffered adverse events, feels the investigation at the district levels needs to be beefed up so that correct causality assessments are made for the public at large. This, she believed, will help end rumour mongering which is creating vaccine hesitancy.

Dr Shahid Jameel, virologist and director of the school of biosciences at Ashoka University, has recommended that given the size of the COVID-19 vaccination rollout programmes in India, the government must provide multiple ways to report adverse events, such as a dedicated call centre where people can phone and report adverse events.

Dr Jameel maintains that there are incidents of blood clots even without administration of vaccines which are around one to two per cent per 1,000 cases a year.

"There is more likelihood of dying from lightning than from vaccine induced blood clots," adds Dr Jameel."That is what the data shows. The trouble is we believe too much in anecdotal references. Association is not always causality.'

When it was pointed out to Dr Jameel that some leading newspapers had tabulated information showing how over 700 people had suffered from adverse effects, Dr Jameel retorts, "The government has brought out names of 180 people who suffered adverse effects. I agree that there needs to be better communication. Sadly, clear communication has been a casualty through the past year."

"Let us say we have 300 adverse effects out of 8.5 crore. Do the calculation," says Dr Jameel. "I can assure you that the number will be no better than those suffering the side effects from taking paracetamol." 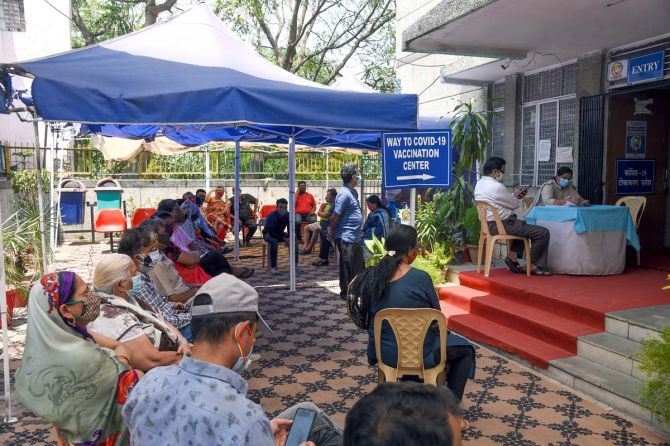 IMAGE: People wait to get the COVID vaccine at a government dispensary, in New Delhi, May 16, 2021. Photograph: ANI Photo

Council of Scientific and Industrial Reseatch Director General Dr Shekhar Munde says that most AEPIs are identifiable within 45 minutes but recipients have been advised to monitor their health for 15 days after taking the jab.

Dr Munde maintains that adverse events need to be monitored for 45 minutes after the shot, but generally any serious adverse event is known in less than half an hour.

Dr Munde has gone public to state that in case of any adverse event, the onus is on he vaccine companies. It is for this reason that it is important to find out if the adverse event was an independent event, or was related to the vaccine.

"The number of people experiencing any kind of side-effect post immunisation is also very small," explains an expert looking into AEFI cases, "much less those who suffer side-effects warranting hospitalisation."