'I can only say that I will put my best foot forward,' Deepa Jayakumar tells Rediff.com's A Ganesh Nadar. 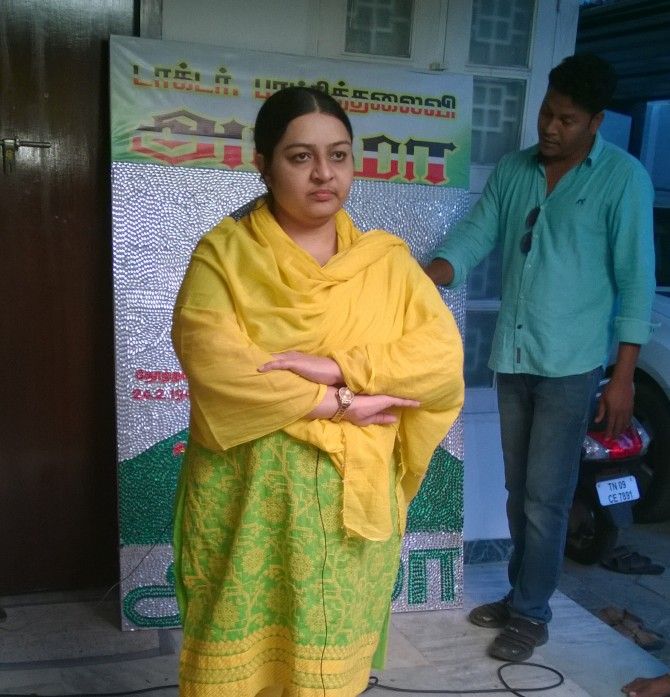 Many Tamilians did not know that J Jayalalithaa, 'Amma' to her AIADMK cadres, had a niece till Tamil Nadu's chief minister was admitted to hospital last September.

Deepa Jayakumar -- whose father was Jayalalithaa's only brother -- was refused permission to see her aunt at Chennai's Apollo Hospital.

After Jayalalithaa passed away on December 5, Deepa told television reporters that her aunt was very affectionate with her when her parents, her brother and she lived in the AIADMK leader's home in Chennai's Poes Garden area.

She added that she had not seen her aunt in about a decade. Deepa, her mother and brother moved out of Poes Garden after her father died in the mid 1990s.

Shortly after she was permitted to pay her condolences to her aunt after her death, posters appeared in Tamil Nadu, promoting Deepa as Jayalalithaa's political heir.

These posters came up just as posters heralding 'Chinamma' -- as Sasikala Natarajan, Jayalalithaa's companion of 30 years was called in some AIADMK circles -- appeared around the party headquarters in Chennai.

That Deepa is a political novice didn't matter. The mysterious forces pushing her centre-stage in AIADMK and Tamil Nadu politics were betting on her relationship with Jayalalithaa in a country famously fond of political dynasties.

In her favour is also a resemblance to her aunt.

And yes, there is also that hint of familiar arrogance.

On Tuesday evening, I hear her tell a stunned television reporter, "This interview has ended, you may leave," pulling out the mike and handing it back with some disdain.

Outside her home in Chennai's T Nagar area on December 7, a sizeable crowd has gathered.

Transparent white shirt pockets already have photographs of Deepa Jayakumar in them -- instead of her aunt or the woman Deepa is challenging for leadership of the AIADMK party.

Security personnel in black guard the gates and tell me, "The press conference started at 3 pm and you are coming two hours late."

"When the press conference started," I tell them, "I was at the airport in Mumbai, I am coming straight from the airport."

My fib seems to impress them, also the fact that my visiting card has a Mumbai address on it.

There are two houses side by side. One, a heritage building, and another where Deepa, who may be in her early 40s, lives. Both houses are covered with posters of her aunt and Deepa.

Inside, on the wall are framed pictures of Jayalalithaa and her mentor MGR. The frames are lined with lights which come on once the room gets dark.

There are two cars in the compound, one of which is a Mercedes Benz.

Reporters are greeted with plates of samosas and chutney that only a Bengali could make. Mineral water bottles are being shared by the journalists.

Deepa is speaking to a television channel. In the background is a huge picture of Jayalalithaa with her birth date and samadhi date mentioned on either side.

The wannabe leader gives her bytes to several reporters before retreating inside her home.

She returns half an hour later. Her assistants tell us in the meantime that she has not eaten for a long time and is also running a fever.

Her aunt's photograph behind her is shifted for the sake of a television crew. She refuses to sit down and says she prefers to stand. Then she storms back halfway through the interview.

I plead with her staff to request her to come back and send in three questions which she refuses to answer.

Undeterred, I send the next three questions. She says she will answer two and comes out again.

Another television channel, and then it is my turn. She gives me a small smile and answers:

Over 1.5 lakh people have signed a petition to the President asking him to stop Sasikala from becoming chief minister. On the streets in Chennai people are tearing down Sasikala's posters. What is your opinion on this?

I know that there is a wave of resentment against her.

Will it be difficult to carry forward the legacy of Amma, your aunt, in the current situation?

It is going to be difficult. Nothing is easy.

Carrying forward her legacy will certainly be a challenge.

People have a lot of expectations.

We will have to fulfill a lot of promises.

At this stage I can only say that I will put my best foot forward.

In a state which is facing a severe drought and people are agitating for jallikattu and not for water, what do you think needs to be done?

I don't think I have the authority to talk about this.

On a personal level I would say both are important.

One is important to our culture and the other to our livelihood.

In both cases, we have to talk to the Centre and work with the Centre to solve the water crises and mitigate the suffering of our farmers. 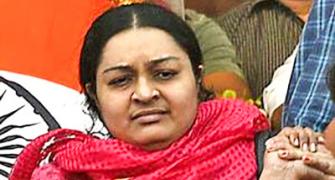 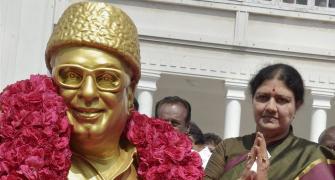