News
Business
Movies
Sports
Cricket
Get Ahead
Money Tips
Shopping
Sign in  |  Create a Rediffmail account
Rediff.com  » News » Man gets lover out of brothel but not out of law's clutches

First our knight had to rescue the girl from pimps . Then the cops sent the girl to an NGO saying she was a minor and could not marry of her own will. Then the girl's relatives surfaced claiming she cannot marry him as he is a Hindu and she a Muslim. Sahim Salim discovers an unusual love story

The same law machinery which shut its eyes to the plight of a little girl while she was forced into prostitution, is now denying her the possibility of a happy life. The girl, already stuck in a web of deceit, is now battling the complicated cobwebs of our administration to lead a decent life.

The 19-year-old orphan was tricked and forced into prostitution in the national capital's red-light area -- GB Road -- about a year ago. And fortunately for her, she found her knight in shining armour about six months ago. He was all she had dreamed of and he pleasantly surprised her two months ago when he proposed marriage to her.

But it was not to be. First our knight had to fight the girl's pimps and manager to rescue her. When he did, the cops sent the girl to an NGO saying she was a minor and could not marry of her own will. Then the girl's relatives surfaced from somewhere claiming she cannot marry him because he is a Hindu and she a Muslim.

This is the startling story of the girl called Fatima (name changed). She hails from a small village in 24 Parganas in west Bengal. She is an orphan and stayed with her brother. About a year and a half back, she met a woman and two kids at her local railway station. The woman told Fatima that she could take her to New Delhi and get her a good job.

"The girl got tempted and without telling her brother and relatives, she got into the train to the capital with the woman. When they reached New Delhi, the woman took Fatima to GB road and sold her off to kothi number 2511. The girl was forced into prostitution and could not find a way to get out of the place," the station house officer of the area, Surinder Jeet Kaur, said.

Vijay Singh (name changed), a resident of Bhopal, Madhya Pradesh, came to the capital about six months back. Vijay, who works as a manager with a multi-national company in Bhopal, had come to Delhi on a business trip. After work, he went to GB Road where a pimp took him to kothi number 2511. He met Fathima there and they had a conversation. Fatima told him about her life and how she had tried to escape from the place unsuccessfully many times.

After that, Vijay went back to her the next day as well. Pretty soon, he started coming to New Delhi on a monthly basis, which later became a weekly affair. And each time, he would go to Fatima's kothi. Their friendship turned into love and about two months ago, he proposed marriage to her.

However, it did not work out the way they planned to. When they broke the news to the kothi incharge, she told them she had paid good money to buy Fatima and she could not let go of her. Vijay approached Kamla Market police station for rescue operations.

"We conducted the raid on July 17 and rescued the girl. As is the procedure, we sent her to the NGO Nari Niketan. Then arose the problem of the girl's age. While she said she is 19, several people said she was a minor. So we had to keep her in Nari Niketan till Vijay or someone else could produce a certificate proving she is above 18. We also produced her in front of the Child Welfare Committee for her age determination," SHO Kaur said.

Suddenly, Fatima's relatives surfaced after the police called them to inform of her rescue. They kicked up a storm saying that Fatima could not marry Vijay as it would be an inter-community marriage.

"See, these kind of cases are very sensitive. We have to have some kind of a verification that he (Vijay) is genuine. CWC also has the responsibility to determine if the girl is a minor or not. Till then, procedure requires her to stay at Nari Niketan," CWC chief, Amod Kant, said.

And that is where Fatima's story hangs. She is currently staying in Nari Niketan. She goes to the Crime Against Women cell of the Delhi police when summoned.

And that is the only place where she meets Vijay these days. 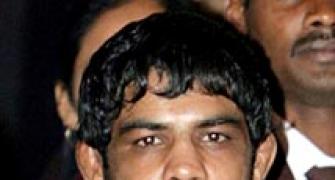