The defence ministry has lost sight of what it intended to achieve -- which was to nurture private defence firms that would compete on equal terms with the 9 defence PSUs and the 41 Ordnance Factory Board factories.
Ajai Shukla reports. 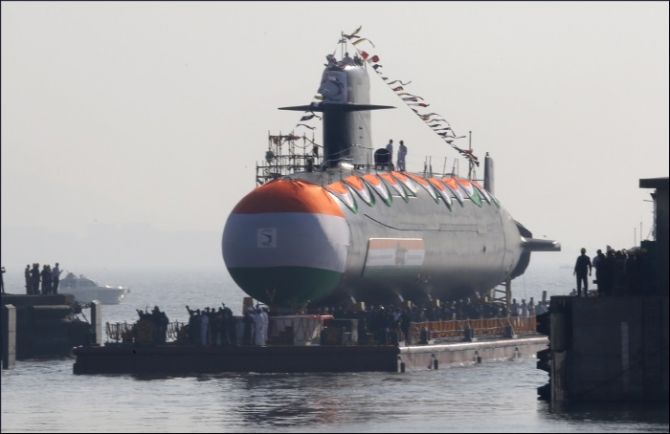 Serious drawbacks were highlighted in the defence ministry's so-called Strategic Partner model of procurement, when five Indian entities submitted expressions of interest for being the SP in Project 75-I -- the plan to build six conventional submarines for an estimated Rs 45,000 crore (Rs 450 billion).

There were two responses from the private sector -- Larsen & Toubro and Reliance Naval and Engineering.

A fifth response came from a proposed special purpose vehicle between HSL and Adani Defence, even though SPVs were not invited to bid.

In many ways, this mirrored the response to the only other SP procurement that progressed earlier -- for building 111 naval utility helicopters for Rs 21,738 crore (Rs 217.38 billion).

In May, EoIs were received from L&T, Tata Advanced Systems, Adani Defence, Mahindra Defence, Reliance Defence and the Kalyani Group.

Although the defence ministry solicited bids only from private firms, public sector Hindustan Aeronautics Ltd also threw its hat in the ring, submitting two EoIs -- one in its individual capacity and another in a joint venture with Russian Helicopters called Indo-Russian Helicopters Ltd.

The defence ministry has remained silent.

To understand how the SP model works, let us consider Project 75-I.

The selected Indian SP will build the six submarines in technology partnership with a foreign original equipment supplier that is being chosen in a separate process.

Which of these six are actually in the fray will become clear on September 24, the last date for OEMs to submit EoIs.

Then, after examining the SP and OEM proposals, the defence ministry will shortlist those it considers eligible.

Shortlisted SPs will then pair up with approved OEMs to submit formal proposals.

The defence ministry will award the contract to the SP-OEM pairing that it believes would build the submarines most cheaply, with the highest indigenous content and the most technology transfer.

The aim is to equip the Indian defence industry with the skills and infrastructure to design and build the navy's next 12 submarines without foreign help.

Towards this end, Project 75-I proposes to incentivise OEMs that will deliver higher indigenous content than the minimum mandated level, which is 45 per cent in the first submarine, increasing to 60 per cent in the sixth.

However, somewhere along the way, the defence ministry has lost sight of what it intended to achieve -- which was to nurture private defence firms that would compete on equal terms with the nine defence public sector undertakings and the 41 factories of the Ordnance Factory Board that monopolised defence production until 2001.

In 2005-2006, the Kelkar Committee recommended that technologically capable and deep-pocketed private firms be nominated Raksha Udyog Ratnas (RuRs, or defence production jewels), each operating in a specific technology sphere.

The RuR identified for fighter aircraft would compete with HAL.

Before long, this excellent initiative encountered push-back from OFB/DPSU trade unions, which feared job losses as manufacturing orders, hitherto handed to them on a plate, flowed instead to the more nimble and productive RuRs.

Further, there was deep bureaucratic reluctance to be involved in selecting RuRs, especially after the decision-makers in the allocation of telecom spectrum and coal mining blocks faced corruption accusations.

Consequently, for the duration of A K Antony's defence ministership, the plan to pro-actively build up private defence manufacturers was put on the shelf.

In 2015, Manohar Parrikar, a defence minister who had once been an entrepreneur, resurrected a similar proposal, incorporating private sector SPs in place of RuRs.

Two Parrikar-appointed committees -- the Dhirendra Singh Committee and the V K Aatrey Task Force -- set out stringent modalities for choosing SPs, including the financial and technical requirements companies were required to meet.

But familiar resistance from bureaucrats and unions held Parrikar back until he relinquished charge as defence minister in March 2017.

His successor, Arun Jaitley, took only weeks to announce an SP policy that entirely subverted its original aim.

Jaitley allowed in OFB/DPSUs, forcing the private sector to compete with public sector entities that had been built up through decades of government largesse, including land, construction infrastructure, manpower skilling and technology transfer over multiple contracts awarded without tendering.

Jaitley's policy also diluted the domain competence needed to be an SP.

A company no longer needed submarine building skills or 'system-of-systems' domain competence to bid as an SP in a submarine project.

Instead, it was enough to have commissioned, or owned a power, steel, chemical or automobile plant.

Besides the requirement for private companies to compete on unequal terms, there are other concerns about how Project 75-I is being pursued.

Eyebrows have been raised over the entry of Adani Defence, which neither has a shipyard nor any shipbuilding experience; its participation rests on the parent Adani Group's power plant.

Since dry docks, wet basins and outfitting berths are essential for building submarines, Adani Defence relies on its SPV with HSL to meet those EoI conditions.

But the rules demand that a bidding company must exist on the date the EoI is submitted -- the Adani-HSL entity apparently does not.

Nor is HSL eligible to bid alone, since it neither meets the EoI's financial criteria (turnover and net worth), nor has it delivered a platform worth Rs 300 crore (Rs 3 billion) in the last five years.

Project 75-I starkly underlines the ambitions of Adani Defence, which, despite never having manufactured a single defence item, is on track to contend in all the four SP procurements planned.

It is already participating in the NUH project and Project 75-I.

Having tied up with Saab of Sweden, Adani will almost certainly pitch for the forthcoming SP tender for building 114 fighters in India.

That leaves only the project for building tanks and, given the stakes Adani has picked up in tank electronics firm Alpha Design Technology, armoured vehicles seem to be in its crosshairs too.

RNaval might shelter behind its parent group's financials, but Reliance Infrastructure's poor liquidity and a credit rating of 'D' severely dents its prospects to qualify.

Intriguingly, the defence ministry has diluted the credit rating requirement in its EoI request.

The Defence Procurement Procedure of 2016 requires a credit rating of 'A' for projects worth Rs 1,000 crore (Rs 10 billion).

The EoI request dilutes it to 'BBB' for a project worth 45 times more.

The logic behind this could be interesting.

Finally, timely delivery is everyone's bugbear, except for L&T, which is delivering vessel after vessel ahead of schedule. RNaval is years overdue in delivering patrol vessels to the navy.

HSL was years late in overhauling a navy Kilo-class submarines.

MDL is years late in delivering the Scorpene submarines under Project 75.

It would seem the defence ministry is not spoilt for choice.