News
Business
Movies
Sports
Cricket
Get Ahead
Money Tips
Shopping
Sign in  |  Create a Rediffmail account
Rediff.com  » News » Defence of India with Made in India

'No country can ever be free to make its choices and remain independent if it continues to wear borrowed plumes,' warn Lieutenant General Ashok Joshi (retd) and Colonel Anil A Athale (retd). As we celebrate the 68th Republic Day, one thing that remains unchanged: Over 70% of the armed might that will march down Rajpath will consist of foreign imported weaponry.

Historically, Indians have been rather indifferent to technology. Otherwise, it is difficult to explain that a people who could correctly compute the days of eclipses and the visibility of planets on a particular day nearly 1500 years ago had to import swords in the 17th century.

When Babur won his battle in 1526 using guns, it made no dent, and the Indian rulers continued with their weaponry as if nothing much has changed. Technology makes things easier for the user; it enables him to do things which he could not do earlier.

This could not have been lost on the intellectuals who created the Upanishads and the shoonya-vad that are stunning in their majesty.

Is there an explanation for this asymmetric development?

Perhaps, there is. The philosophers concentrated on self-denial and austerities to 'purify' their minds, and unconsciously rejected comforts and convenience that the technologies of those times yielded.

Wars were regarded as battles between Dharma and Adharma with a strong belief that where there is Dharma, there will be victory.

The Indian tendency to view history in terms of yugas comprising thousands of years played a role too. Defeats were seen as a passing phase as they waited for the 'ultimate' victory.

The current trials were seen stoically as result of bad karma. With this philosophical background, very little intellectual effort was directed to understand the changes that fire arms and gun powder brought in. IMAGE: Akash missiles, which will be seen at the Republic Day 2019 parade. Photograph: Kamal Kishore/PTI Photo

The Indian view of the progressive deterioration in human morality with the passage of time -- from Satya to Kali Yug -- made them regard advances in science and technology with suspicion.

Products of technology were then created by tradesmen with their hands and the varna concept may have created a gulf between the thinker and the doer that was difficult to bridge.

And last of all, the total absence of strategic culture made the intellectual indifferent to wars.

They found it convenient to believe that war could be avoided by trusting the enemy, and making him concessions. The Simla Agreement is testimony to this attitude.

All countries and civilisations have their pacifists. But in the most countries they are on the margins, while in India they are a dominant force and dictate policies and shape perceptions of the entire society. Being prepared to defend oneself and acquiring strength is labeled as 'war mongering'.

The long and short of it is that even today things have not greatly changed: A nation that can put numerous satellites in their designed orbits and plans to send man into space cannot design and manufacture fighters and fighter bombers of its own and has to 'import' technology.

Intellectuals take pride in disassociating themselves from defence research. In the field of social sciences, 'anti-State-ism' is venerated. In extreme forms, it manifests in leading universities as support to anarchists and separatists of all hues.

Unless a timeline is drawn and the defence research and development organisations as well as the users -- that is the armed services -- are made to take a vow that there shall be no import of weapons and weapon platforms thereafter, no decisive change is likely to come about.

If self reliance is a virtue, in this field it is a dire necessity.

Our weaknesses have been compounded by lack of study of our own military history. In the late 18th and early 19th century as the British battled the Marathas for supremacy, they continued to supply them gunpowder. The board of directors of the East India Company, overseeing the India operations, had raised this question with Warren Hastings.

Hastings's response is instructive. He responded that if the English stopped the supply of gunpowder, the Marathas may try to make their own, so it is better to keep them dependent.

The import of weapons and weapon platforms has invariably proved problematic: Either there is shirking for fear of charges of corruption, or certain unavoidable opacity which can be politically exploited by the Opposition notwithstanding the damage it does to national security.

The first such controversy started with the Jeep scandal of the 1950s. Desisting from imports for the fear of allegations -- justified, or otherwise -- has at times led to inaction. That the inaction has been at the cost of war preparedness is easily forgotten.

Interestingly, there is another model that we need to follow. The Indian Navy opted for indigenisation early enough and the nation has greatly benefited from this.

The Indian Army and the Indian Air Force should draw the right lessons and be prepared to rely on what the nation can produce, if need be by compensating quality with quantity as the Soviets had done in World War II.

Many scientists in India excel in information technology which is likely to play a major part in development of artificial intelligence that in turn is bound to impact emerging cyber warfare.

Here seems to be a field that is crying out for action by Indians within India. There must be other such areas on the horizon, or just below it, which are in need of exploration. The object should be for India to develop something that is totally indigenous. That day may be far away, but a beginning has to be made without further waiting.

The close cooperation between the armed forces and the scientific community is meaningful, because the product has to be integrated into the warp and weft of strategy.

Lowest yield nuclear weaponry is soon likely to enter the domain of armed 'dissuasion'. It is time to revisit the Indian 'no first use' stance in this context.

We indeed have a window of opportunity at the present since India and the US (and the West with it) is, for the first time, sympathetic to Indian concerns.

Throughout the Cold War we were at the receiving end of technological denial. With the supply of latest gadgets to our Western neighbour, our R&D had to virtually run a technological race with the US.

That situation has changed and we do see a glimmer of hope that India would not be pulled back. China, that has replaced the West, is no match as far as advanced weaponry is concerned.

Thus, it should be possible to take a relatively relaxed view. We have some breathing space to develop our own weapons and weapon platforms to defend ourselves.

No country can ever be free to make its choices and remain independent if it continues to wear borrowed plumes! 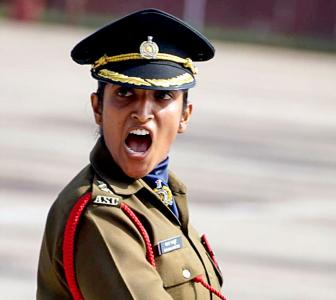 Will be fulfilling my dad's dream: Head of IAF contingent for R-Day parade