Lal Ded, the mystic of Kashmir

At a time when the Kashmir valley has been shut down, it is perhaps appropriate that we remember Lal Ded, Kashmir's best known spiritual and literary figure, someone remembered with divine adoration both by Hindus and Muslims in Kashmir.
A fascinating excerpt from Sandhya Mulchandani's For The Love Of God: Women Poet Saints Of The Bhakti Movement.
Illustration: Dominic Xavier/Rediff.com 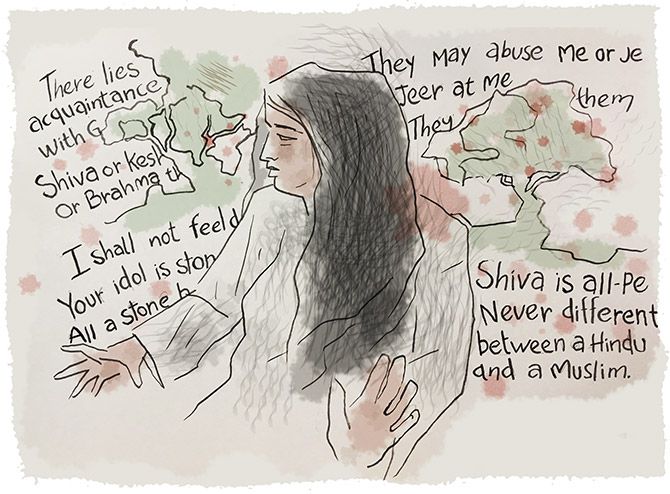 Lalleshwari or Lal Ded is undoubtedly Kashmir's most illustrious poet-saint and mystic.

Hailed as 'amongst the greatest spiritual geniuses of the world' and considered to be 'the maker of modern Kashmiri, language as well as literature', her life is shrouded in myth and legend.

Born to a well-to-do Kashmiri Brahmin family, she was married off at 12. This was an ill-matched marriage doomed from the beginning.

Ignored by her insensitive husband and ill-treated by her mother-in-law who persecuted her for spending her time in prayer and meditation, Lalleshwari tolerated the abuse and humiliation for as long as she could with patience.

Unable to endure her marriage, Lalleshwari finally left her husband and home when still in her early twenties.

By walking out of her marriage and home, she challenged orthodox codes and throwing opprobrium, and even her clothes, to the wind, set off on her quest for the truth. She wandered from village to village and soon came across and became the disciple of a Kashmiri Saivite saint called Sidh Srikanth.

The result of his teachings was that Lalleshwari took on the status of being a yogini or mendicant devotee singing and dancing near naked. Personal appearances, with or without clothes did not matter as she saw herself as the true spirit within.

The guru gave me but one percept

From without, go within

This saying I took to heart

And naked, I began to dance. 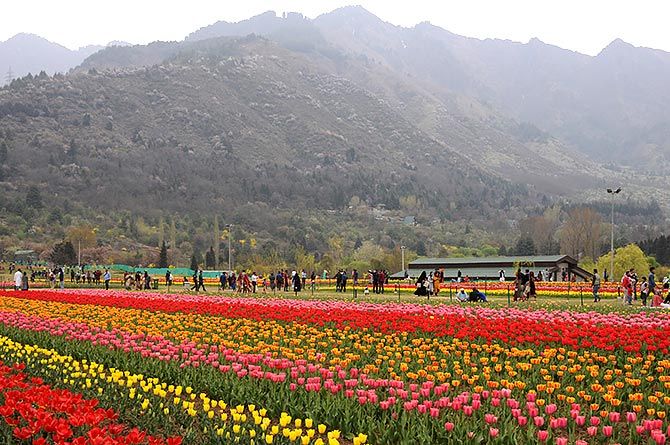 This is also when she started writing four-line mystical poetry called vatsun or vakhs, which literally mean 'speech' or 'voice'.

Known as Lal Vakhs, her verses are the earliest compositions in Kashmiri and form an important part of the history of modern Kashmiri literature.

Acutely aware of the political and social changes that were taking place around her, Lalla's poems reflect the changing times but are steeped in mystical veneration of the godhead she was seeking.

Kashmir Saivism recommends eschewing all outward observances and rituals, emphasising the need to do away with all basic desires while internalising the quest for God.

In time, she soon came to be known as a miracle-working saint, attracting huge crowds who came to listen to her.

The spiritual heights she reached made her fearless, often questioning her own teachers and mentors.

A thousand times did I my guru ask

What is the name of the one who can't be named?

And asking again and again I tired myself out

How has something come out of nothing?

O mind, why do you feel intoxicated by someone else's wine?

Why do you mistake the unreal for the real?

Weak mindedness has let you to be overcome by others' faith.

Wandering from village to village, barely clad and unconscious about herself or her body, freed from social prejudices and rules, she wrote and sang her vakhs.

Wear just enough to keep the cold out

Eat just enough to keep hunger from your door

Mind, dream yourself beyond Self and Other

Remember, this body is just pickings from jungle crows.

Unmindful of what people thought and said about her, she dismisses her critics.

They may abuse me or jeer at me,

They may say what pleases them,

They may with flowers worship me.

What profits them whatever they do?

I am indifferent to praise and blame.

Let them mock at me and call me names.

If a true devotee of Shiva I be,

I shall not feel distressed nor hurt.

Can a few ashes a mirror befoul? 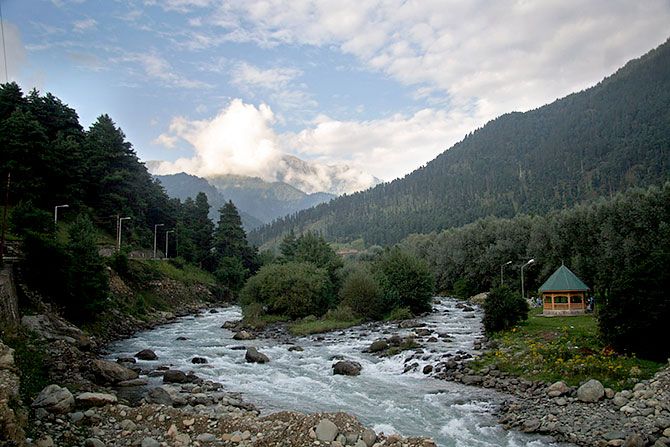 Eschewing decorum and social conventions, completely secular in her understanding of the one undifferentiated God, she despairs at the obsolete Vedic traditions still being followed, idolatry and Brahmin priests in general. She is relentless in her criticism of priests and followers of meaningless rituals:

Your idol is stone, your temple a stone too

All a stone bound together from top to toe!

What is it you worship, you dense Brahmin?

Bind but the vital air from heart to mind.

Shiva is all-pervading and present in each particle.

Never differentiate between a Hindu and a Muslim.

If you are shrewd and intelligent, know thyself.

There lies acquaintance with God.

O fool, right action does not lie in observing fasts and ceremonial rites.

O fool, right action does not lie in providing bodily comfort and ease.

In contemplation of the Self alone is right action and right counsel for you. 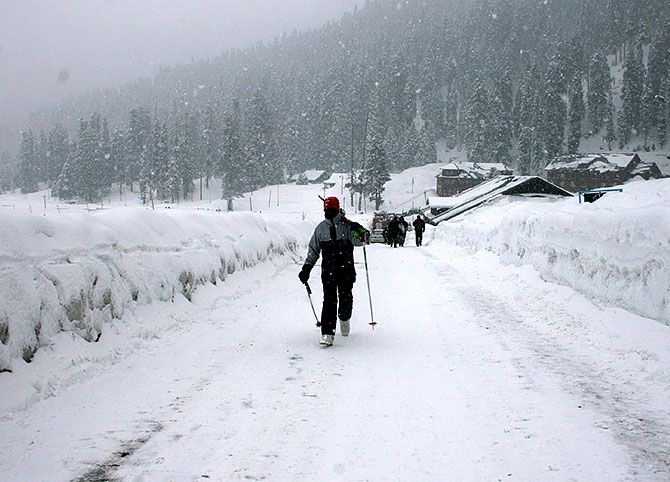 Lal Ded's mysticism and her vakhs are a curious mix of intense bhakti for Shiva and Sufi mysticism that often reflect the political and religious changes that Kashmir was going through.

With the Valley coming under the rule of Muslims, Islam soon became a dominant force, with the Hindu population remaining being largely Saivite, a situation that rapidly changed.

A schism soon developed between pre-Islamic and Islamic Kashmir causing turbulence and confusion. Scholars see Lal Ded as 'the most significant historical bridge that connects the two shores of this gulf effectively'.

Shiva or Keshava or Jina

Or Brahma, the lotus-born Lord

Whatever the name He bears

May He remove from me

The sickness of the world!

It maybe He or he or He

(For He is one though called variously). 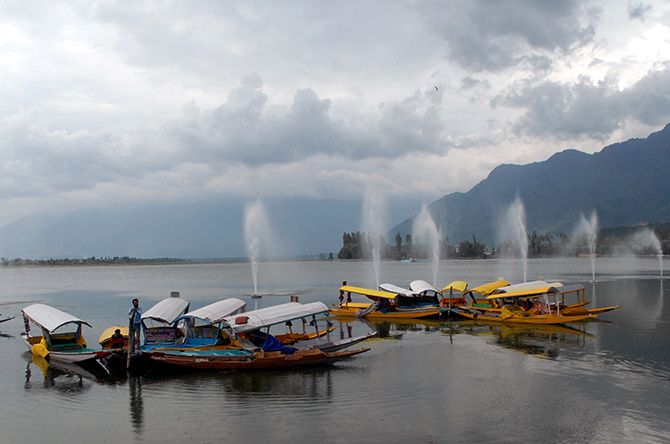 She was a product of the Hindu spiritual path that had evolved in Kashmir. Her immediate successor, a great saint and scholar in his own right, was Nund Rishi, the founder of the Muslim Rishi order venerated as the patron saint of Kashmiris.

He had this to say about Lal Ded: 'Much like Kabir who came some fifty years later, there has been an attempt to appropriate Lal Ded into Islam, probably because she, a non-Muslim, stands as the emblem of Kashmiri literature. There is little doubt that her spiritual core was embedded in yoga and Kashmir Saivism.'

'Known as the 'Trika', it was a philosophy based on the principal beliefs that the reality behind all phenomenon was Shiva; that he is imminent in everything moving or static. It advocated a path of love and compassion, shedding rites, rituals and sacrifices, and emphasizing self-introspection.'

'Lal Ded naturally rebelled against the educated elite of Sanskrit academia who posed as the custodians of knowledge and tradition.'

Although imbibing the scriptures and their philosophies, for Lal Ded they meant nothing unless coupled with personal experience. Not one to separate her mystical life from her day-to-day involvements, she used her understanding of the scriptures to raise herself to experience the ultimate reality, which is the nature of Parama Shiva himself.

Despite being steeped in the traditions of the day, she was modern in her ability to self-reflect, to be secular and tolerant, and have diverse views. This made her define her relationship to God in universal terms, that everything and everyone emanated from one reality.

She lived her life as she taught and wrote without fear or favour. Although she never undervalued the reading of scriptures, she denounced the mere chanting of them. She had started her spiritual journey as a tormented soul, but soon attained self-realisation that gave her tremendous inner strength, the confidence to speak her mind and follow her own path.

She is Kashmiri to the core, shaped by the land, language and both Hinduism and Islam. The author and poet Ranjit Hoskote writes in his book: 'To the outer world, Lal Ded is arguably Kashmir's best known spiritual and literary figure; within Kashmir, she has been venerated both by Hindus and Muslims for nearly seven centuries. For most of that period, she has successfully eluded the proprietorial claims of religious monopolists.'

Lal Ded's life and her mystic musings (vakhyani) are compiled together in what is known as 'Lalla Vakhyani'. These continue to find resonance with Kashmiris largely because she was able to articulate her spiritual quest and journey in the vernacular, in Kashmiri, the language of the common man.

She was truly a people's poet and she gave them an idea of a personal God and how to find Him using simple metaphors and imagery. Her vakhs gave a new lease of life to the dying Kashmiri Saivism traditions

Toward the end of her life, Lalleshwari is believed to have gone to a town called Bijbehara (in present day Anantnag) where, it is said, her soul arose as a flame to merge into the Supreme Soul.

An interesting anecdote associated with her death is analogous to that of Kabir's. Both Hindus and Muslims staked a claim to her body, which she settled miraculously.

It is said that her spirit asked those present to bring two large washbasins into which the body would be placed. On lifting the basin, her followers only found a liquid, one half of which was taken by the Hindus and the other by the Muslims.

Although she may be seen and interpreted differently by each community, Lal Ded continues to deeply impact the psyche of all Kashmiris.

The beautiful land that had been a crucible of rich cultures seven hundred years ago has today been eroded with the continued pressure of politics and religion, terrorism and militancy.

This lone woman's voice easily stands as Kashmir's most powerful symbol of culture and civilization and a reminder of how things could be.

Excerpted from For The Love Of God: Women Poet Saints Of The Bhakti Movement by Sandhya Mulchandani with kind permission of the publishers, Penguin Random House India. 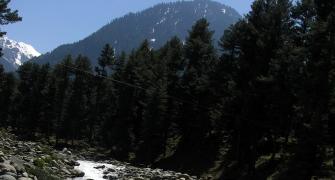 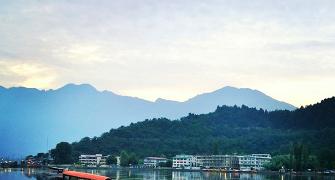 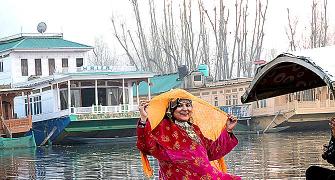 In pix: How to holiday in Kashmir 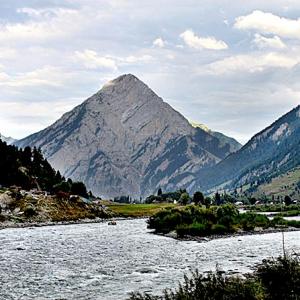