News
Business
Movies
Sports
Cricket
Get Ahead
Money Tips
Shopping
Sign in  |  Create a Rediffmail account
Rediff.com  » News » 'There seems to be a threat every time it rains'

'We have only ourselves to blame.'
'For selfish reasons and greed, we have obstructed many outlets, preventing the water from flowing out, be it rivers, tributaries or small drainage systems.' 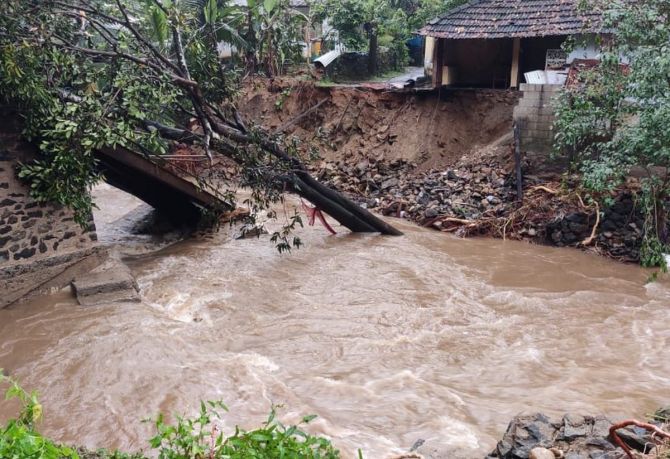 When unusually high rainfall and severe floods drowned most of Kerala and took away hundreds of lives in August 2018, it was explained away as a freak, once-in-a-century phenomenon.

But the following year, there was another flood, though a bit less severe in terms of intensity and consequences.

Once again, as parts of the state reel under the onslaught of unseasonal rain, flash floods and landslides, distressing tales of families marooned and washed away by floods emerge and images of nature's fury are all over television screens and social media.

There are also heart-warming stories of people turning Good Samaritans and providing timely help to those in need.

Siju Thommy, an autorickshaw driver, shares with Sujit Chandra Kumar how half a day of intense rain was all it took for life in his village to come to a complete standstill and how he and a group of friends responded to an SOS and rescued a family from impending calamity. 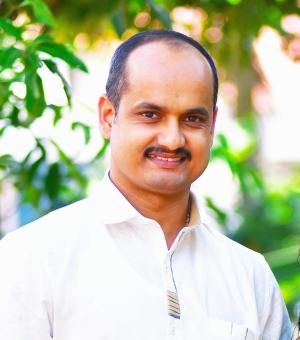 I am an autorickshaw driver from Moolamattam, a village in Idukki district of Kerala, which is surrounded by mountains on all four sides. It is also the seat of the hydroelectric power station.

The waters from the Idukki dam gush into the spot called Thriveni Sangamam before flowing into the Thodupuzha river. Whenever there is unusually high rainfall and the river swells, we have anxious moments and sleepless nights.

In the latest rain on Saturday, October 16, around 20 houses were completely destroyed while at least 50 houses got damaged partially. Two tourists got washed away when the vehicle in which they were travelling got trapped in flood waters. Many lives were saved because people in low-lying areas were evacuated to safer places.

Luckily, the downpour came during the day. If it had happened during the night, rescue and relief work would not have been possible and many would have been caught unawares.

On Saturday, it started pouring heavily by 9 am. By 11.30 am, it became very heavy, causing landslides and water logging. By 1 pm, everything came to a standstill. Thankfully, rain stopped an hour or two later.

Proper rescue and relief work could only start by 3 pm even though there were many distress calls. We do have a fire force unit in Moolamattam but with a dozen staff, they can only do so much.

We also would have preferred to wait for the rain to stop, but a lady called Soumya reached out to me for help and she was sounding very anxious and miserable. She was calling from Ilappally, a rather isolated village around 10 km away with just a narrow road for anyone to enter. Her husband Deebu is an accident victim and has been bed-ridden for years.

Both in 2018 and 2019, their house had suffered damage and as the waters rose, they were getting fearful by the minute. The couple have two small children besides his aged parents. She knew that if rains were to continue and the old, tiled house were to give way, they wouldn't be able to escape because of her husband's condition.

She wanted me to go and take him in the autorickshaw to one of their relatives who was in a relatively safe place in Moolamattam. I knew it was too risky to transport a paraplegic in my rickshaw. I contacted my friends, almost all of them drivers who ply different vehicles in Moolamatttam.

Around seven of us finally decided to go as a team to rescue Deebu and we opted for a pickup truck that would negotiate the water-filled roads better.

In many places, we had to stop and clear the road of mud and rocks. Though it was a short distance, the drive in the rain took us about a couple of hours.

When we reached, some youth in the area had put Deebu on a stretcher, brought him out and were waiting for us. We got a cot and bed into the van and then made him lie down on it, before starting the journey towards Arakkulam, at a distance of 15 kilometres, where their relative was staying.

We put up a tarpaulin roof and a couple of us sat on each side of the cot, lifting up the sheet. It was a very slow journey braving incessant rain, but we accomplished the mission.

There were several other calls for rescue in the meantime, but we could not attend to them. Once the rain stopped, more volunteers came out to help others. IMAGE: Scenes of destruction like this abound in Moolamattam.

There seems to be a threat every time it rains. I am 40 now and I remember how it used to rain cats and dogs when I was a schoolboy. But then, there were enough outlets for water to flow. However heavy the downpour, it would get drained out in a few hours.

In my opinion, we have only ourselves to blame for this development. For selfish reasons and greed, we have obstructed many outlets, preventing the water from flowing out, be it rivers, tributaries or small drainage systems.

If there is a shop, the person running it will close the outlet near it. If there is a rivulet, someone will build something close to it or even inside it. So, water finds new routes and directions to flow out.

People have been encroaching into public property bit by bit, leading to such disasters. Even when dams were opened, we didn't have such issues earlier. But now, water is forced to find new pathways.

There is a threat of soil erosion in almost all the areas. Loss of lives would have been manifold if the rain didn't stop in the afternoon. If the rain had continued for two or three days, like it did in 2018, I think this village would have simply ceased to exist.

We are living in fear because many of the houses are on shaky ground. Strangely, once houses were destroyed in 2018 because of the floods, the panchayat allowed houses to be built on the river shore.

Permission should have never been given to build these houses on the banks with government funds. These were allowed to be built so close to the river.

Wasn't it obvious to everyone that if the water level rises, these houses will get flooded? Around seven such newly-built dwelling units have got damaged in the current flash floods.

There are over a hundred houses on the edge of the river, some with a pillar or two actually inside the river.

What we need to understand is that these are actually unseasonal rains. If thulavarsham happens in all its intensity, many more houses will get uprooted. In fact, people who have been moved to camps may not be able to return to their houses. In Moolamattam, we have around 150 people living in a camp set up at a school.

In this region, some of us act like an informal group that gets together to help people during floods and landslides. It is actually becoming a way of life for us.

There are many volunteers, but they usually align themselves to political parties or organisations run by them. We are more of an informal bunch, with no allegiance to anyone but humanity. 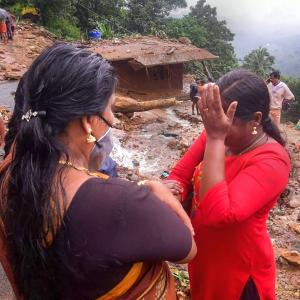