News
Business
Movies
Sports
Cricket
Get Ahead
Money Tips
Shopping
Sign in  |  Create a Rediffmail account
Rediff.com  » News » Am I Proud A British Indian Like Me Is PM?

Am I Proud A British Indian Like Me Is PM?

'They say 'a picture paints a thousand words', so seeing Rishi Sunak PM at the door of Number 10 can never be taken from us.'
'It is a symbol that will go down in the history books.'
'It is the very embodiment of me saying to my boys, "You can be who you want to be",' notes James Salins in this must-read feature. 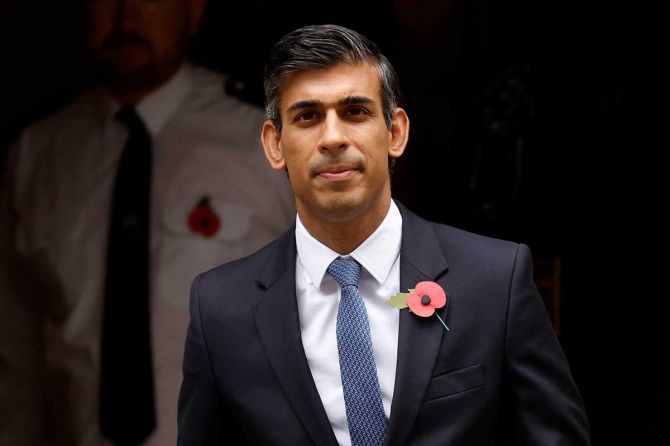 I am a British Indian and was born in England in 1970 to parents who settled in London in the swinging 60s.

My name is James.

I love football and I'm no cricket fan.

The Beatles, Bowie & Blur are my idols.

I'm at ease with my heritage and I love India, but I feel British. I am British.

My wife was born and brought up in Mumbai, a Bandra Girl at heart, the smell of roadside chaat still pulls on her heartstrings. 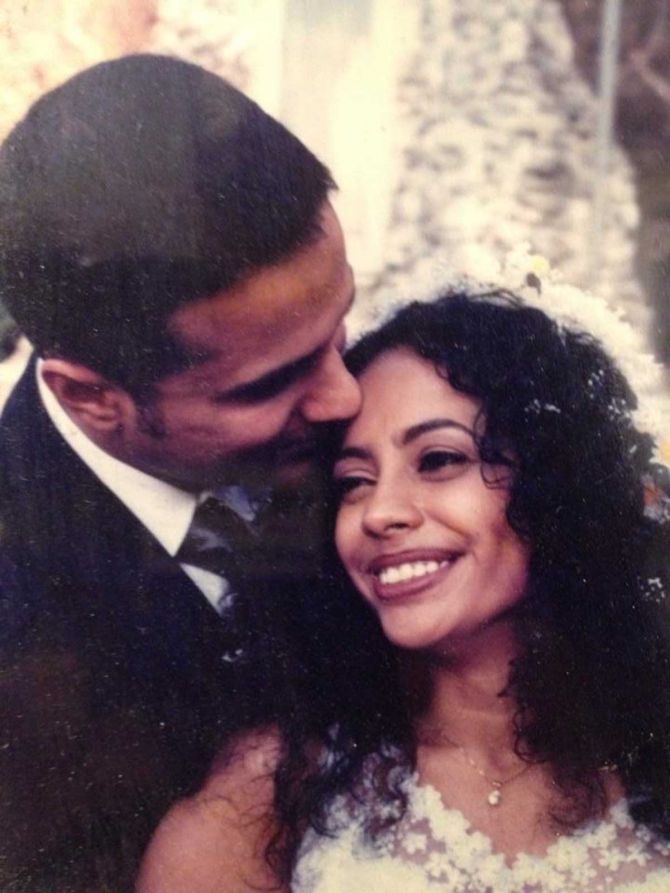 IMAGE: 'Me and my Bandra girl on our wedding day, February 1999'. Photograph: Kind courtesy James Salins

I became aware of politics when I was eight.

Maggie Thatcher had just come to power; I distinctly remember my dad shooshing us and tutting at the BBC news on TV while my brother and I played noisily in the living room.

My father had a distrust of Maggie, and by association, so did I. 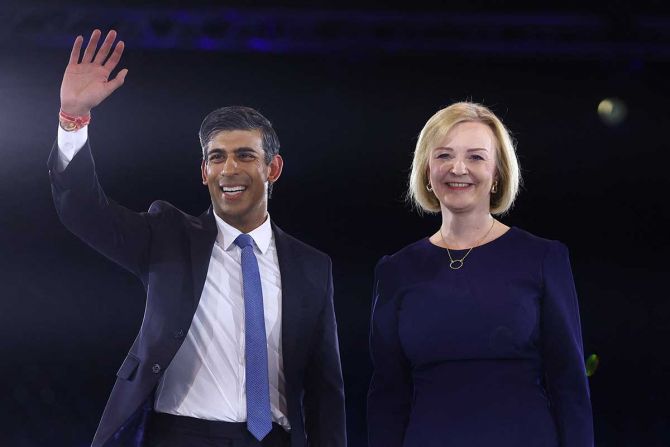 Fast forward to 2022 and British politics has been a crazy rollercoaster ride post Brexit.

The UK has had 5 prime ministers in 6 years. But this new one is noticeably different.

As I write, Rishi Sunak has been PM for about one week.

A British Indian now presides over Westminster and the 67 million people of the UK.

Is this a significant moment for British Asians and the Indian Diaspora generally? Yes, of course.

But do I feel proud? Proud that a British Indian is now the PM?

A bit maybe, but not especially.

I don't feel that this is the UK's 'Barack Obama' moment. Maybe that's a good thing.

People are talking about his fiscal conservatism and not his brown face.

Conservative MPs had to vote sensibly this time around after Liz Truss's disastrous 45-day tenure.

Rishi was clearly the most competent person in the room.

He had after all had proven himself as Chancellor during the pandemic.

Rishi happened to be British Indian, no big deal. 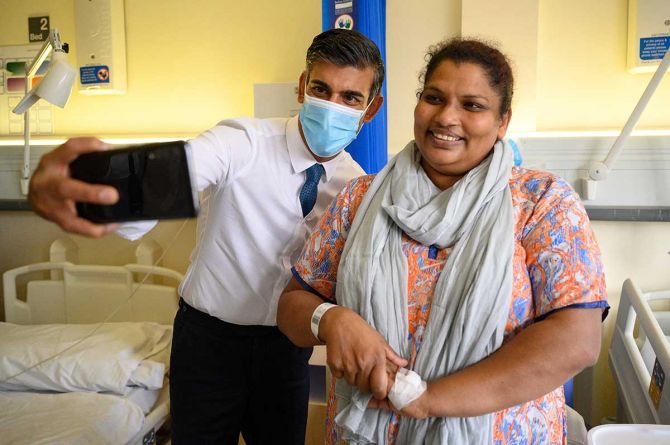 Dishy Rishi to the rescue.

The suave money man who rocks an Armani suit and is professionalism personified.

But how do I feel?

I've been asked many times before how I'd feel if a British Asian became prime minister.

Of course, I'd seen a few Asian Chancellors and Home Secretaries before, and even an Asian Mayor of London. But this is different, this is Prime Minister, the post held by Churchill, Atlee, Lloyd George etc.

To be truthful, I feel slightly relieved, but underwhelmed.

That post Trump feeling when Biden ushered in normalisation again.

A nationwide collective calming of the nerves, but no excitement of a new dawn. 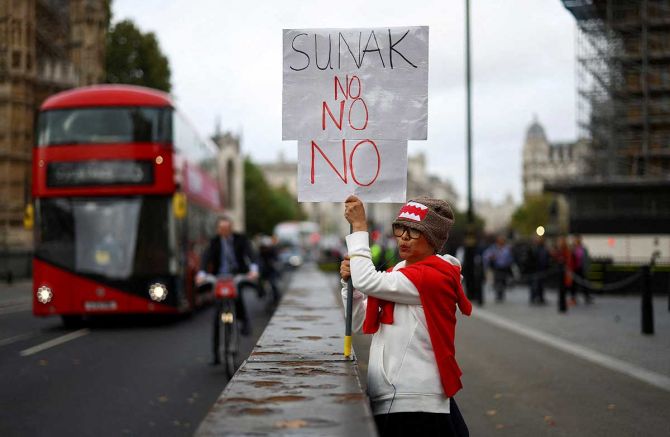 IMAGE: A protestor against Rishi Sunak becoming prime minister holds a placard outside the Houses of Parliament in London, October 21, 2022. Photograph: Henry Nicholls/Reuters

Rishi should have got the job first time around, but his 'Economics of Truth' were a bit dull and unpalatable to the 180,000 members of the Conservative party.

Or was there something more sinister going on with racial undertones?

Is this why Rishi was crowned swiftly second time around by the majority of MPs without a further party-wide vote?

Or would the party membership have come to their senses this time?

Representation is all well and good, Liz Truss and Kwasi Kwarteng were our 3rd and 1st female PM and Black Chancellor respectively. But witness how that ended both swiftly and ignominiously.

Is Rishi just an acceptable face brought in as a damage limitation exercise to a party who thinks they will lose the next general election anyhow?

Rishi is privately educated and studied PPE at Oxford. So far so familiar.

The standard route into the political upper echelons here in the UK. But we also have our youngest PM for 200 years who is undeniably British Indian, undeniably Hindu, is married into the Infosys empire which is symbolic of Indian wealth and globalisation.

Rishi also got an MBA from Stanford and entered the banking world via Goldman Sachs showing him to be a Brit with an international flavour and banking chops. 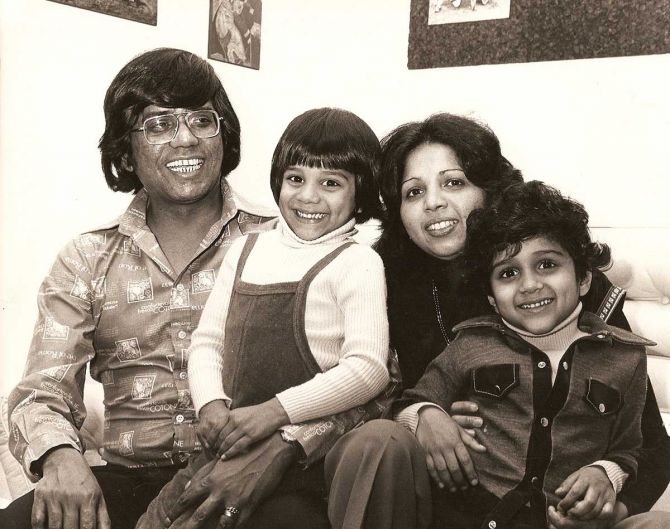 For me, growing up in England in the late 20th Century was a glorious mishmash of cultures.

I was born in Twickenham, the spiritual home of English Rugby.

I grew up in Guildford, a largely white and affluent town 20 miles southeast of London.

My brother and I were usually the only non-white kids in our schools.

We integrated easily enough, my parents were Protestant Christian and very Western in their outlook, and I felt shielded from a lot of the nasty racism that was endemic in Britain in the 70s and 80s within my suburban enclave.

My father worked hard as an architectural assistant in the civil service, my mother worked long hours as a night nurse in our local hospital.

My mother handed us over to our father in the evenings and he in turn handed us back to our tired mother at 8 am in the morning.

We ate fish fingers and chips in white friends' houses on play dates after school, they in turn would try home-made chapatis, curries and samosas when we returned the favour.

Our closest family friends were still Indian. The clamour for belonging still strong from first generation Indians who struggled for acceptance in the 60s.

No blood relatives to fall back on, my weekends were spent calling Indian family friends Aunty and Uncle.

While my parents consumed Scotch and Bombay mix downstairs with their friends, we consumed the latest pop singles and traded the latest football stickers upstairs. 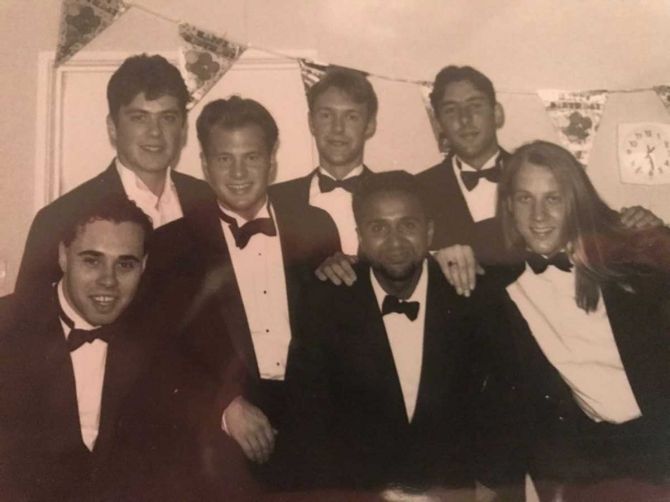 My growing up was done against a backdrop of Margaret Thatcher, John Major and Tony Blair.

The combative Thatcher years which saw our manufacturing heartlands torn up in favour of the service industry and banking.

The grey years of John Major which paved the way for the hopeful early years of Tony Blair and the emergence of a confident artistic new outlook dubbed 'Cool Britannia' before the Iraq war left a bitter taste.

My 1990s were suitably heady as I partied hard at university, lived abroad, kickstarted my career in advertising, all culminating in marrying my sweetheart in Mumbai. 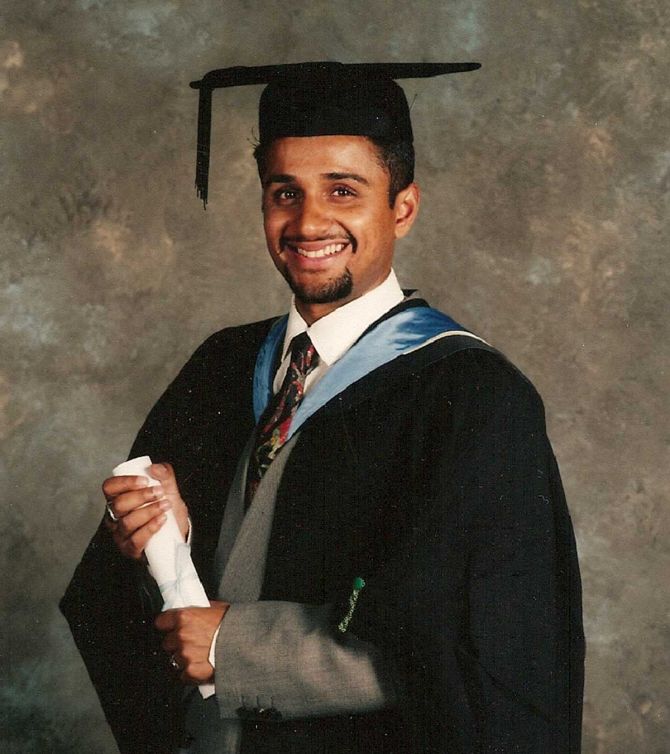 I was taught from a young age that I was no different to my white friends.

That I could achieve anything I wanted to achieve. But there was always a salutary note of caution: "Son, you'll need to be better than the other people around you to make the grade."

The insinuation being there will both be visible and invisible barriers to Indians and other ethnic minorities making it in Western countries.

I'm happy that the UK has given me ample opportunities to shine.

I have very rarely been confronted by overt racism in my life thankfully. But I will pass the same sentiment down to my teenage boys.

Be the best, don't expect favours.

So it has been with Rishi Sunak. 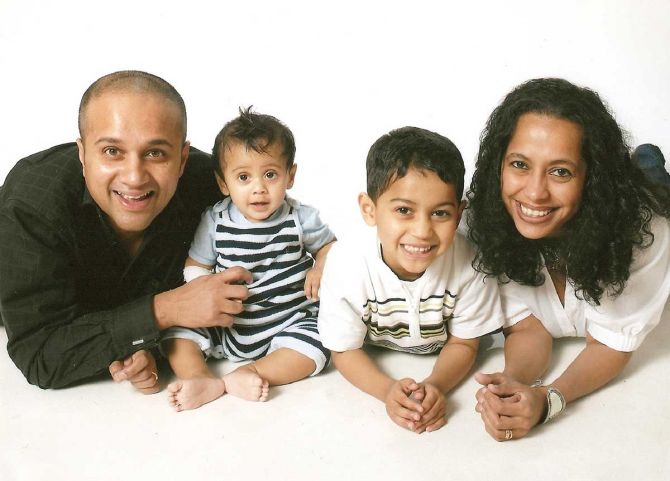 IMAGE: 'My family in 2008. How time has flown.' Photograph: Kind courtesy James Salins

My politics are centrist left, so I'm not going to be easily swayed by a Conservative party that has often leaned hard right post Brexit and is often nicknamed the 'Nasty Party'.

The truth is that the Conservatives have been in power for 12 years and since Brexit, the party is divided and broken.

Rishi has inherited a poisoned chalice. It is likely he will lose the next election in 2024 and either become a backbencher or pursue something else entirely.

But it is important for people of Ethnic Minority backgrounds to see with their own eyes someone reaching the top of the British system. They say 'a picture paints a thousand words', so seeing Rishi Sunak PM at the door of Number 10 can never be taken from us. 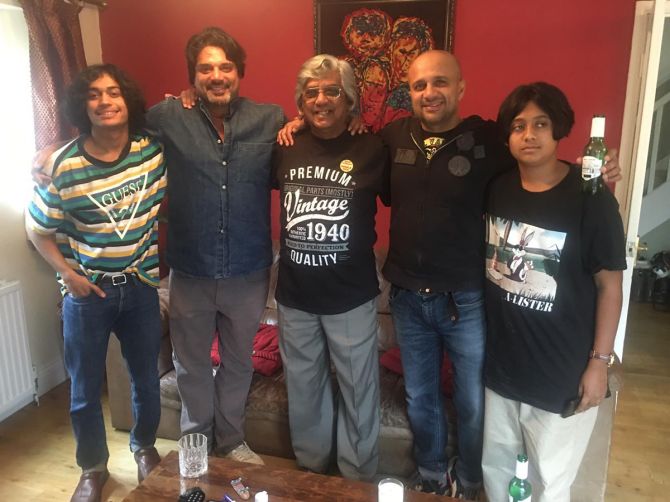 It is a symbol that will go down in the history books. It is the very embodiment of me saying to my boys 'You can be who you want to be'.

I don't ever have to ponder whether we will have a Non-white Prime Minister in my lifetime anymore. It is done and I am glad. 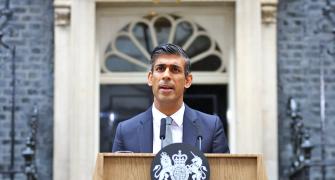 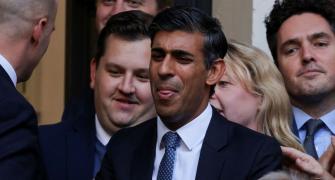 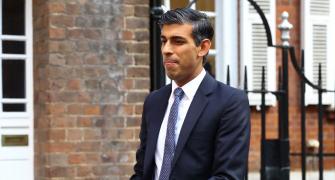 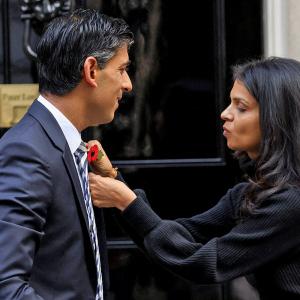 What Are Akshata And Rishi Up To? 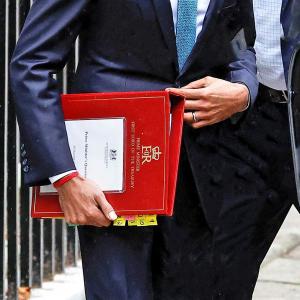