News
Business
Movies
Sports
Cricket
Get Ahead
Money Tips
Shopping
Sign in  |  Create a Rediffmail account
Rediff.com  » News » 'It's a message for all protestors: If you join, you are dead'

'They should have spoken to the Sterlite protestors when they were sitting in the villages.'
'They should not have waited for them to come to Tuticorin."
What started off as a lone village grumbling about ground water pollution on Tuesday turned into a battlefield.
A Ganesh Nadar reports. Sterlite has been operating in Turicorin, south coastal Tamil Nadu, for the past two decades. But all hell broke loose when Anil Agarwal's Vedanta-owned company announced its plans for expansion, by which the plant's installed capacity would be doubled.

What started off as a protest in one village soon accelerated till the entire area around Sterlite was agog with protests.

It was all Gandhian, though, for all that the protestors did was sit in the centre of the village surrounded by posters condemning Sterlite, and explain to all and sundry how the company was polluting the air and water in the surrounding areas.

The occasional rallies took place, which were regularly covered by regional television channels.

Only three days ago a peace committee was formed to settle the issue, and strangely it seems to somehow have been the genesis of Tuesday's violence.

Some 20 of the protestors under the leadership of a lady member of the Uyirkolli Sterlite Ethirpu Makkal Iyakkam (people's movement against killer Sterlite) spearheading the agitation, reportedly met the police and decided to settle the issue amicably.

"We did not authorise her to attend or form a peace committee," a knowledgeable member from the protestors group tells this correspondent. "The day before yesterday, in fact, we had ousted her from the committee. She has no right to talk on our behalf."

"She is not an affected person, on the other hand she is a member of the MDMK (Marumalarchi Dravida Munnetra Kazhagam) and we don't want politicians in our midst," the source adds.

"To let the police and the Sterlite management know that the lady was no longer with us and we don't subscribe to the peace committee or any settlement that they have made, we arranged the protest on Tuesday," the source explains.

"We are not Koodangulam protestors (those protesting against the Koodangulam nuclear plant) to sit for years in a pandal. We want an answer. For 100 days we have been protesting silently, but no one has bothered to come and meet us. Neither the bureaucrats, nor the political heads, or the Sterlite management."

"We went to the collectorate for an assurance that the Sterlite expansion will not happen and the existing plant will be shut down."

"But instead of talking to us, they stopped us, with the police being very aggressive."

How exactly things spun out of control, leading to the police opening fire on the protestors, is still unclear.

Bystanders say the violence was waiting to happen. "They should have spoken to the protestors when they were sitting in the villages. They should not have waited for them to come to Tuticorin," a local resident pointed out.

What started off as a lone village grumbling about ground water pollution on Tuesday finally turned into a battlefield.

Sterlite, which seems to have sensed trouble, last week asked the high court to order the police to give the factory additional protection.

Locals apprehend that the cycle of violence has not ended. "People who lost their dear ones are not going to remain silent," one of them said.

Tuticorin residents say the majority of those killed in the police firing were fishermen -- strange, since the protests around Sterlite were being staged by farmers, and none of them in fishing villages.

A retired teacher alleged that the fishermen had been mobilised by the lady who the protest committee members say was expelled from the committee.

The fishermen are expected to meet on Wednesday to decide on their future course of action.

S P Udaykumar, who led the protests against the Koodangulam nuclear power plant in the state, told Rediff.com, "Kanyakumari is simmering with protests. I had expected them to fire at protestors here to teach them a lesson, but they have done so in Tuticorin."

"This was done to teach all protestors a lesson. It's a message from the corporate and the political firmament. The message is clear: Don't join protests or you will be dead."

"Be ready to die if you want to take on the government. That is the message." 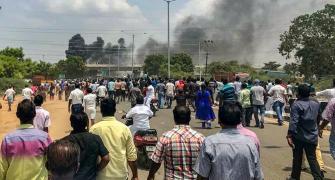 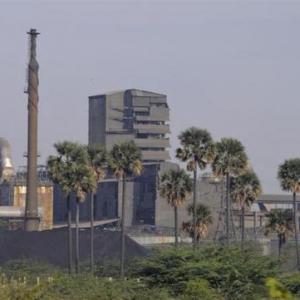