'What is the future of ISRO?' Professor Rao asked from his hospital bed.
'What we see now is the continuation of programmes we started long ago.'
'What are we planning in the space science arena?'
'What is our plan for human space flight?'
Former ISRO chairman Madhavan Nair recalls his last meeting with Professor U R Rao, the pioneering Indian space scientist who passed away on Monday, July 24. Professor Rao was the person who initiated me into space science.

When I joined the Thumba rocket launching station as a youngster, Dr (A P J Abdul) Kalam was my boss.

Dr Kalam was just starting the payload integration section and I was put in charge of that.

That was the time Professor Rao had come back from the US; he was at the Physical Research Laboratory in Ahmedabad.

One of his research fellows along with a Japanese scientist was building a payload, and we were asked to integrate the payload with the rocket.

So, in September 1967, I was sent to Ahmedabad. I spent a few weeks with Professor Rao and that was the starting point of my space career.

I was a raw electrical engineer, fresh out of college. The lessons on the galaxy, universe and space were quite new to me and my interactions with him guided me towards space science.

He was extremely encouraging, and was available if I had any doubts. Moreover, he was quite knowledgeable and conversant on the subject.

Later, when he was head of the satellite division at Thumba, we had a very healthy competition, so to say.

His division had proposed the development of the tele-command system for the SLV 3 during Dr (Vikram) Sarabhai's time. Dr Kalam was in charge of the whole programme.

I was one of the contenders for the tele-command system. To my surprise, I won the competition and was made the project director.

What followed were some of the very rewarding moments of interaction with Professor Rao.

Later he moved to Bangalore, building satellites. I would say he was the father of satellite technology in India.

Personally, I had lots of opportunities to interact with him in those days. He always respected competence in people and recognised skill. He was never biased by any personal feelings.

He was a workaholic and respected people who worked hard. Maybe that's why he respected me.

He was a man in a hurry, and wanted instant results. He was very impatient as far as work was concerned.

He always wanted perfection from everyone.

It was a great experience spending time with a person who had excellent analytical skills, had the ability to spot problems and find the solutions, and the determination to see that problems were solved immediately.

After the SLV3 launch in 1984, I was moved to the electronic division at the Sarabhai Centre, which was not a significant post at that time.

When Professor Rao became the chairman, ISRO, he personally moved me to PSLV.

I still remember, one fine morning, I got an order saying that I was appointed as the director, PSLV. He also added that, with full powers of the project director.

Like what happened in 1967, this was also a turning point in my life. It was a huge change for me from the electronics division.

He had this idea about how to groom a person. If I had remained in the electronic division, I would have been making some computers or something like that.

Instead, I was thrown into the PSLV project, and I was the project director for almost 10 years.

Those years were the most rewarding in my life, all thanks to him. 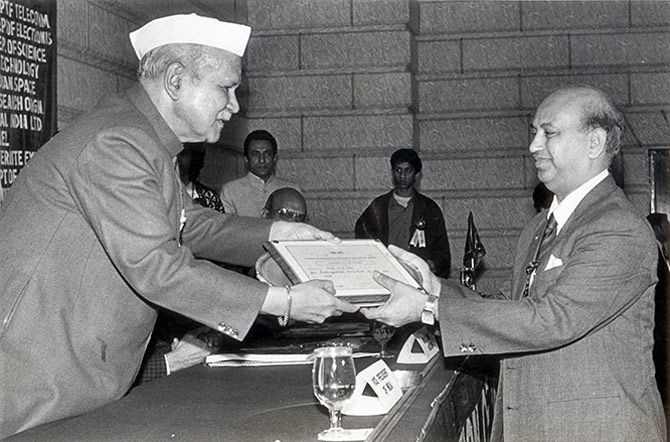 IMAGE: 'At ISRO, as far as the Indian space programme is concerned, all the key technologies -- whether it is for the satellites or the launch vehicles or space research programme -- he was the father of it all,' says G Madhavan Nair, the former ISRO chairman.
Professor Rao, right, with then Vice President Dr Shankar Dayal Sharma, who presented him with the Distinguished Scientist of the Year Award, November 24, 1988.

With Professor Rao, there was no hierarchy system; he was encouraging and appreciate of good work.

Though he was the chairman, he used to call me directly and give me technical advice whenever we had any problem.

We always had a very friendly relationship. We also shared some of the most difficult moments in our lives too.

He was the chairman and I was the project director of PSLV when the first launch happened. It was a failure.

When it failed, I was in bad shape.

I went to him to explain and saw him collapsed in his chair due to the shock of the failure.

After a few hours, we started talking about how to come out of the failure and have a successful launch the next year!

At ISRO, as far as the Indian space programme is concerned, all the key technologies -- whether it is for the satellites or the launch vehicles or space research programme -- he was the father of it all.

He was the initiator of all technologies while Professor Satish Dhawan was the institution builder.

Professor Rao headed the satellite centre, right from Arya Bhatta to IRS to PSLV to in fact, everything.

He was the chairman overseeing everything during the PSLV launch.

When you develop something new, there will be failures and he took the blame for all the failures and we enjoyed the fruits of all the successes.

If we are where we are right now in satellite launches and space technology, it is because of the foundation laid by him. 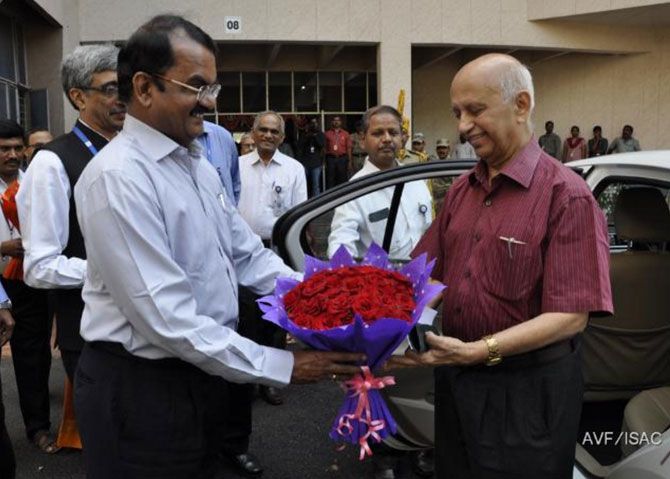 IMAGE: 'If we are where we are right now in satellite launches and space technology, it is because of the foundation laid by him,' says G Madhavan Nair.
The ISRO Satellite Centre in Bengaluru felicitated Professor Rao in March 2017 on his being awarded the Padma Vibhushan, India's second highest civilian honour.
Photograph: Kind courtesy: The ISRO Satellite Centre

He was available for advice even after he left ISRO. When I took over as chairman, he was always there for me. We used to interact quite often, especially during the Moon mission, etc.

Last month, I felt I should see him as he was not keeping good health. When I reached Bangalore to meet him at his house, I was told that he was rushed to the Manipal Hospital.

Though I was a bit hesitant to go there, I decided to go in the evening. My plan was to spend a few minutes with him and come back, but to my surprise, he spoke to me for one whole hour!

And it was about the past, present and future of ISRO.

I was surprised by the passion with which he spoke. His wife was a bit alarmed as he had not spoken the whole day.

But when he saw me, nothing could stop him from talking.

One thing that still bothers me is the question he asked me. He asked, 'Nair, what is happening to our department?' I heard only the department part. Then, he said, 'I am worried about ISRO.'

'Everything is doing very well,' he continued, 'but remember these are programmes we had started long ago. What we see now is the continuation of all those programmes.'

'What is the future of ISRO? What are we planning in the space science arena? What are we doing for the new propulsion system of rockets? What is our plan for human space flight?'

He spoke about ISRO's future for at least 15 minutes. He wanted to have a new vision for ISRO and was concerned that there was none.

He might have conveyed this to many people and I am sure ISRO will come out with a new vision statement soon.

He was a pioneer in India's space programme and laid the foundation for all the space technologies which we enjoy today.

I feel the way the country recognised him was not enough; he should have been put on a high pedestal.

The best tribute we can give is initiate more youngsters into the space programme as we need more and more young minds. 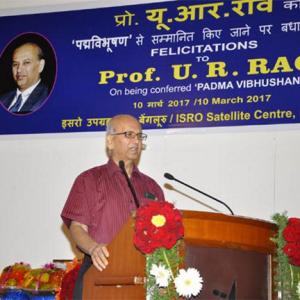 The pioneer who gave India's space programme a boost