In a precarious mission, Wing Commander Charles Simon and Squadron Leader S Venkatramanan and crew rescued a woman in the final stage of pregnancy from atop a water tank in Chennai. She delivered twins the next day!

Archana Masih/Rediff.com spoke to the pilots about that dramatic day. 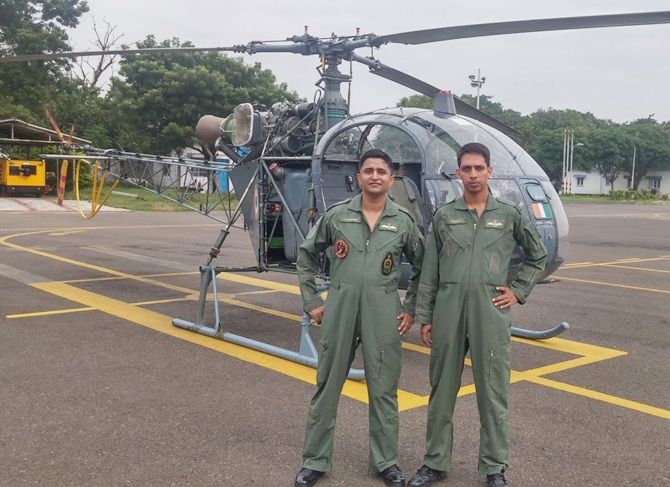 When Wing Commander Charles Simon and Squadron Leader S Venkatramanan launched their Cheetah helicopter from the Tambaram Air Force base on December 3, they had no idea what lay ahead that day.

Chennai had received its worst rainfall in 100 years on December 1-2 and the two Indian Air Force pilots along with several other helicopter pilots had been flying rescue missions from sunrise to sunset since December 1.

In the five days of the Chennai deluge, WinCo Simon and Sqn Ldr Venkat flew 30 sorties and did 36 rescues --- but what they did on day 3 was not only unusual and praiseworthy but humanly touching.

With all communication lines broken down, the pilots received instructions from their operational control centre to rescue a young woman in the final stage of pregnancy. She was marooned on the roof of her home.

Armed only with approximate GPS coordinates, the pilots flew out in search of the pregnant woman. But what they encountered was a sea of houses with 10 to 12 people atop each roof.

It was the proverbial needle in a haystack kind of situation. IMAGE: The pilots with Corporal Arun Singh, left, and Corporal Rahul Kumar, right, who were part of the rescue team.

"We literally flew roof-to-roof in search of her. Since the sound of the chopper drowns all other sounds, we had to communicate in sign language with people on the roofs," says Wing Commander Simon, a Category-A flying instructor at the IAF's Flying Instructors School.

The very best of pilots make it to Category-A; they are entrusted with the task of training future instructors.

"There were around 1,000 people on different terraces and it was hard to spot her. We were circling for 10, 15 minutes and it seemed there was no hope of finding her," adds co-pilot Squadron Leader Venkatramanan, a Chennai native who will complete ten years in the IAF next week.

"I was on the left side of the chopper and looking at every woman if she had a bump," he says with good humour on the phone from Chennai.

Just then they spotted Deepthi Velchamy, the lady they had set out to rescue. Since her pregnancy would not permit her to be winched up, the pilots indicated that she be brought to the top of the water tank on the terrace.

Some personnel wearing orange overalls, indicative of the National Disaster Relief Force, were also on the terrace. They put Deepthi in a chair and positioned her on the tank.

The pilots, accompanied by Corporals Arun Singh and Rahul Kumar, meanwhile, circled around and made the approach. As WinCo Simon maouvered the chopper, Sqn Ldr Venkat seated on the side of the water tank, provided vital verbal navigation. IMAGE: Helicopters for rescue and relief at the Tambaram Air Base in Chennai. 13 IAF choppers flew 195 sorties in those 5 days.

The chopper hovered low, its left skid (the Cheetah has sleigh-like landing gear) gently touched the water tank; its right skid was in the air. Deepthi was helped into the aircraft; tears were running down her face.

Sqn Ldr Venkat gestured to her that all would be okay and ten minutes later, they brought her to the Tambaram Air Base, where an Air Force lady gynaecologist awaited her. According to the rules, rescued civilians are flown to the air base and handed over to the civil administration.

It was here that Deepthi revealed that she was due for delivery that day itself and hers was a complicated case. Her medical papers were not with her and she needed to be urgently admitted to the Ramachandran Hospital that was aware of her medical history.

Since the roads were blocked and water-logged, the pilots were given clearance to airlift her to the hospital. At the medical college hospital, WinCo Simon was lucky to find a basketball court to land the chopper.

Deepthi delivered twin girls the following day. With all communication lines down, her request for rescue was conveyed to the authorities by her concerned sister in America.

Overwhelmed by the circumstances, her husband Karthik told the Press Trust of India, 'I salute these brave men.'

But the two pilots say they are trained for situations like this. 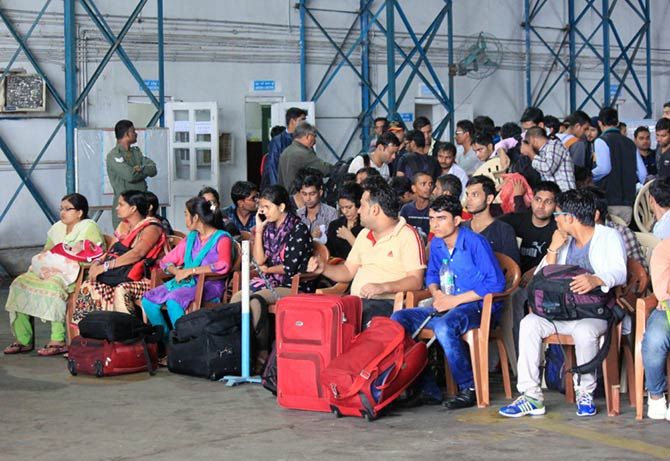 IMAGE: Stranded people waiting to be transported to safer places from the Tambaram Air Base.

"Hovering with a skid on a rooftop and with limited reference is challenging," says WinCo Simon who was part of the team that rebuilt the Car Nicobar Air Force base after the 2004 tsunami.

"It was team work of pilots and crew. We are trained for such ops and the IAF is always geared up for any mission as the situation demands."

"Personally, it was a very satisfying task, while professionally every helicopter pilot is trained to accomplish these kind of tasks," says Sqn Ldr Venkat, who has flown rescue ops in Kashmir in the winter snowfall of 2008-2009. 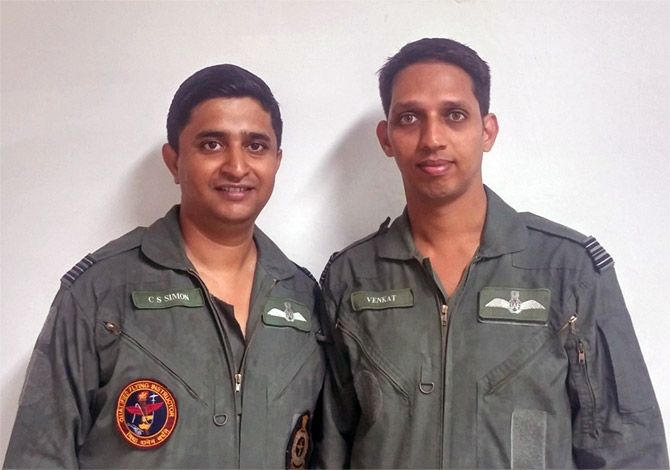 IMAGE: WinCo Simon, left, has been involved in rescue and relief ops after the 2004 tsunami in Car Nicobar. Sqn Ldr Venkat, right, flew rescue missions in the Kashmir snowfall of 2008-2009.

"Once you are in the cockpit and start flying, you need all your skills and follow the rules. That is what we keep in mind while flying without getting too emotional about what we achieve," he adds.

Both the pilots have done stints with the UN Peacekeeping Mission in Congo and are the first ones in their families to join the armed forces. They are quite surprised with the interest their mission has elicited, and attribute it to a video that one onlooker shot and uploaded on YouTube.

"My parents were quite thrilled because I am the only one in the family to make to the TV news," laughs Sqn Ldr Venkat.

After the IAF wound down its ops in Chennai, the two pilots visited the hospital to meet the new mother and twin girls. They carried two bouquets on behalf of Air Chief Marshal Arup Kumar Raha. Since the babies were in the ICU, they could not see them, but were inundated with thank yous from the family.

"Saving somebody's life is unparalleled," says Wing Commander Simon, "It is something that will last a lifetime." 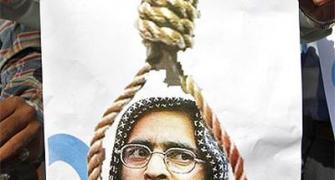 Why terrorism can't be delinked from religion 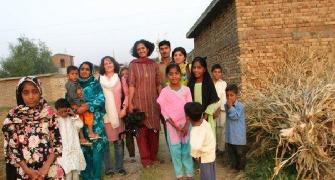