How Mugabe plunged Zimbabwe into an abyss of despair

During his 37-year rule, the nation’s lush fields became wastelands, disease and hunger became rampant and the economy registered a negative growth of six per cent, says Shreekant Sambrani. 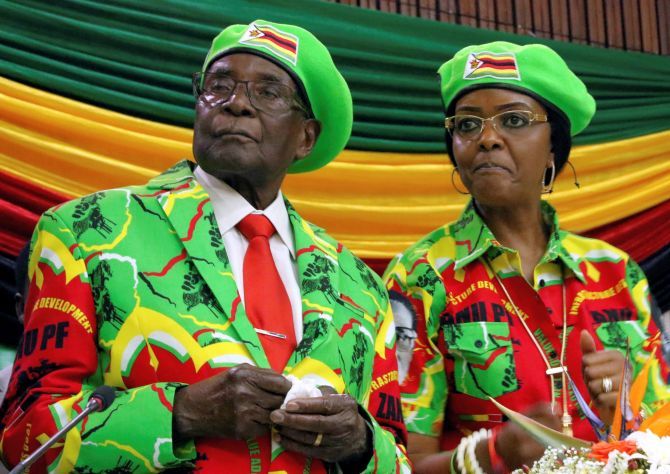 IMAGE: Zimbabwe's Robert Mugabe and his wife Grace. On November 18, the 37-year-long rule of the country's founding father came to an end. Photograph: Philimon Bulawayo/Reuters.

“Game over. Done. Finished!” said a spokesman for the Zimbabwe War Veterans on November 18. I knew then it was the end of the 37-year-long rule of the country’s founding father-turned-strongman, Robert Gabriel Mugabe. The army had placed him under house arrest earlier in the week. The ruling Zimbabwe African National Union–Patriotic Front party expelled him the next day, asking him to resign. The party and the military were largely Mugabe’s creations, but the veterans enjoy respect in Zimbabwe independent of him. Mugabe ensured to be on their right side. They in turn remained loyal to him, helping overcome the many challenges he faced. But, not this time.

Zimbabwe’s tragedy is of far greater consequence than the fate of the senile megalomaniac that Mugabe became. It was a far different country in 1980, when it attained constitutional Independence from the United Kingdom, reasonably prosperous even after decades of increasingly violent guerrilla warfare against the ruling white minority and international sanctions meant to debilitate the racist regime.

I first went to Zimbabwe in early April 1983, just after its rather noisy third anniversary of liberation. I was a UN advisor on land, a major and extremely sensitive concern for the new government. I was not adequately briefed about the pleasant surprise that I was to experience on landing in Harare. The highway from the airport to the city was excellent. My cab, a much-refurbished 20-year-old Renault, ran smooth on a mix of petrol and maize alcohol. The driver stopped at a crossroad, pointing to the red traffic signal overhead. “Must obey the robot,” he said, even though there was not a vehicle in sight. 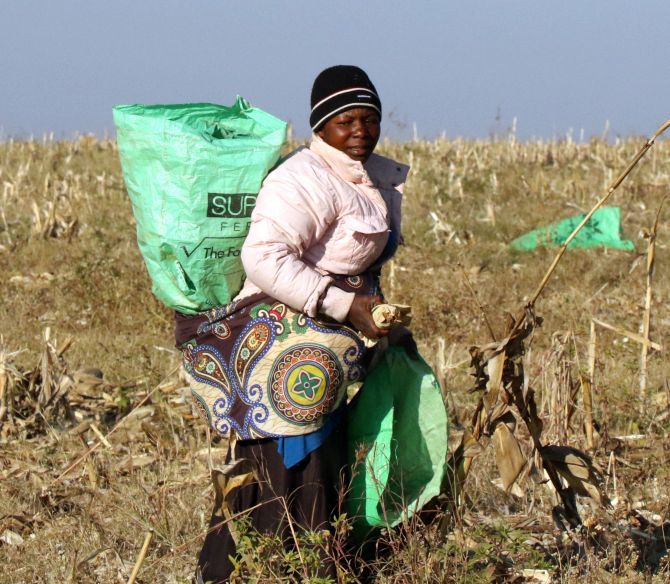 IMAGE: Zimbabwe's maize and wheat in the past yielded over 8 tonnes per hectare, among the highest in the world. However, in the 1980s, under Mugabe's rule, grain and dairy production fell to a quarter of that. Photograph: Philimon Bulawayo/Reuters.

Downtown Harare sported the looks of a contemporary European city, with orderly traffic, pleasant emporia, and good-humoured crowds of both black and white folk. A five-star hotel room cost Z$25 (then $30) and a four-course meal with excellent local wine, Z$ 6–8. Harare had the lowest per diem entitlement for UN staff.

The entire country had very good infrastructure. One could easily drive at 100 kmph on well-maintained highways and gravel country roads. Power was abundant, phones worked, and housing quite neat and clean.

Zimbabwe was still largely segregated, with the whites -- two per cent of the 7.5-million population -- in neat bungalows or large farmsteads, and the Africans in what were called “locations,” townships on the edges of cities and towns, far better than those in the neighbouring Apartheid-era South Africa. 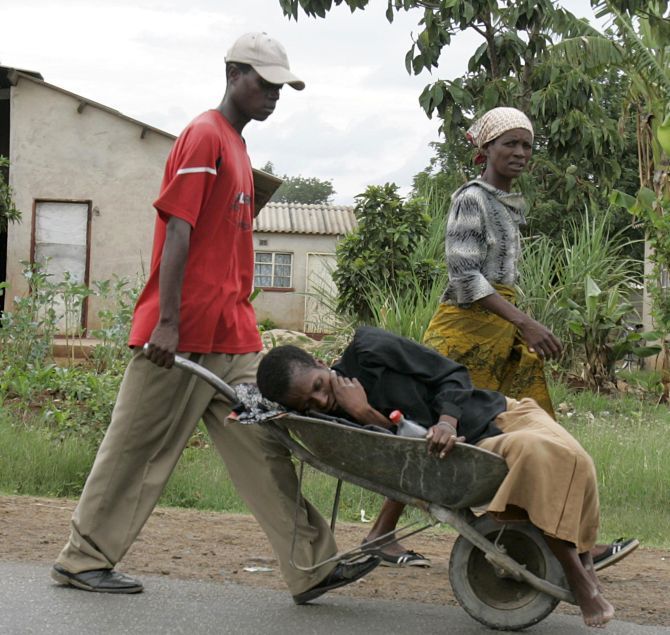 IMAGE: A woman suffering from the symptoms of cholera is taken in a wheelbarrow to a clinic in Harare. Disease is rampant in Zimbabwe, especially a raging AIDS epidemic. Photograph: Philimon Bulawayo/Reuters.

The land-locked country of 3,90,000 sq km comprises mostly high veldt between the Zambezi and Limpopo valleys to the north and south. It was known as the bread basket of southern Africa. Its well-planned agriculture was highly productive. The country grew virtually everything -- fruit and plantation crops in the highlands; maize, wheat, and cattle elsewhere. Its maize and wheat yields of over 8 tonnes per hectare were among the highest in the world. Most of the grain and dairy/beef production came from some 6,000 large farms owned by white settlers.

Education had spread to the black population as well. Many young Zimbabweans were prized teachers in the newly independent African countries where they sought exile. With a per capita income of about $750 in 1980 (although with a highly skewed distribution), Zimbabwe was second only to South Africa on most economic metrics in Africa.

Land ownership was the crux of the Zimbabwean War of Liberation. The government was committed to distributing land among Africans. The United Kingdom provided funds for voluntary, peaceful purchase of the white-owned farms. This was a very slow process, despite sizeable white emigration to South Africa and Australia. Incidents of forced evictions of owners and occupation of their lands by armed gangs, sporadic to begin with, began increasing by 1986, just before my last visit. Mugabe justified them not out of compulsion but conviction. He failed to see, or ignored, the fact that this usurpation concentrated illegal wealth among corrupt party and army leaders. 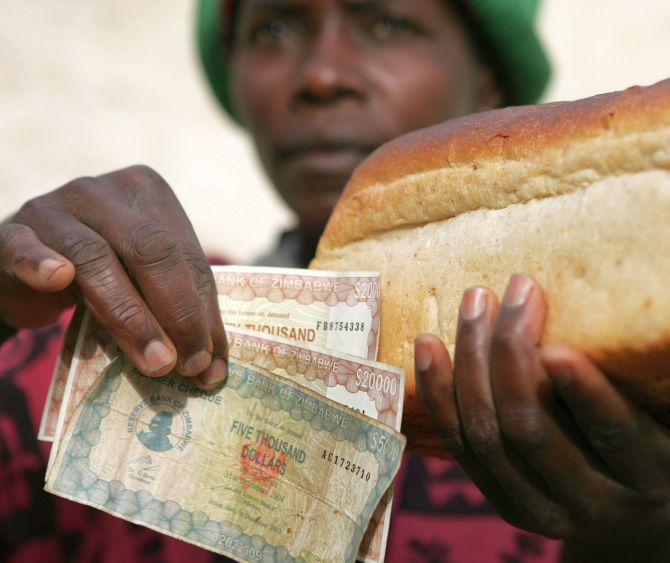 IMAGE: Zimbabwe’s bankruptcy in the last decade led to the worst case of hyperinflation in modern history. At one time, Z$1 trillion could not buy a loaf of bread. Photograph: Philimon Bulawayo/Reuters.

As Britain sought government intervention, Mugabe turned increasingly paranoid and hostile, leading to his megalomania. By the 1990s, he made himself president and the country a one-party state.

Zimbabwe became isolated globally, trade and agriculture declined, contrary to government claims. The once-lush fields became wastelands. But that did not deter Mugabe from spending $1 million a day on military intervention in the Congo.

Zimbabwe’s bankruptcy in the last decade led to the worst case of hyperinflation in modern history. At one time, Z$1 trillion could not buy a loaf of bread. Hard currency became legal tender, for the lucky few who had access to it. Most of the country slid into a barter economy.  Disease and hunger were rampant, with a raging AIDS epidemic. Grain and dairy production fell to a quarter of that in the 1980s. The Zimbabwean economy registered a negative growth of 6 per cent a year between 1999 and 2009. 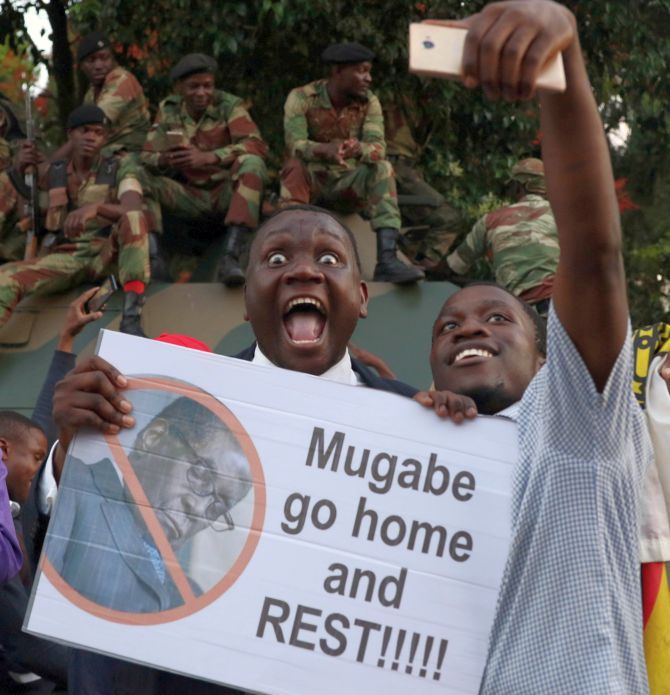 But Mugabe never relinquished his iron grip, even when forced into power-sharing by Thabo Mbeki of South Africa. Mugabe carried on, assuming Mbeki’s successor, Jacob Zuma (himself no paragon of virtue) would continue to support him, hoping, at 93, to anoint his second wife, the infelicitously named Grace, as his successor.

Mugabe smothered the aspirations and ambitions of an ebullient young nation and plunged it into an abyss of despair. Shakespeare’s Mark Antony said at Julius Caesar’s burial, “The evil that men do lives after them, the good is oft interred with their bones.” The long-suffering Zimbabweans obviously hope that Mugabe’s evil wrought will be interred with his regime, judging by their jubilation at his “resignation”. 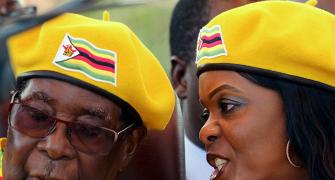 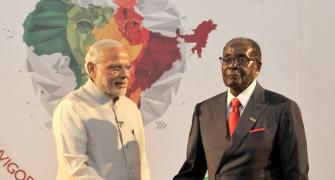 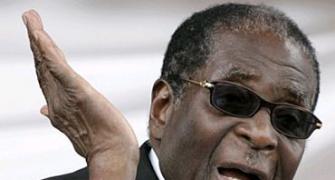 In Pix: The World's MOST HATED men 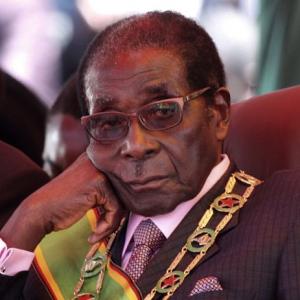 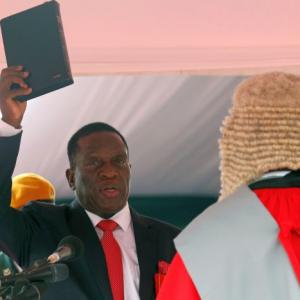