News
Business
Movies
Sports
Cricket
Get Ahead
Money Tips
Shopping
Sign in  |  Create a Rediffmail account
Rediff.com  » News » 'How does stoning us help their cause?'

'How does stoning us help their cause?'

For the father of the Chennai youth killed in stonethrowing in Srinagar, questions and memories are all that remain.
A Ganesh Nadar reports. 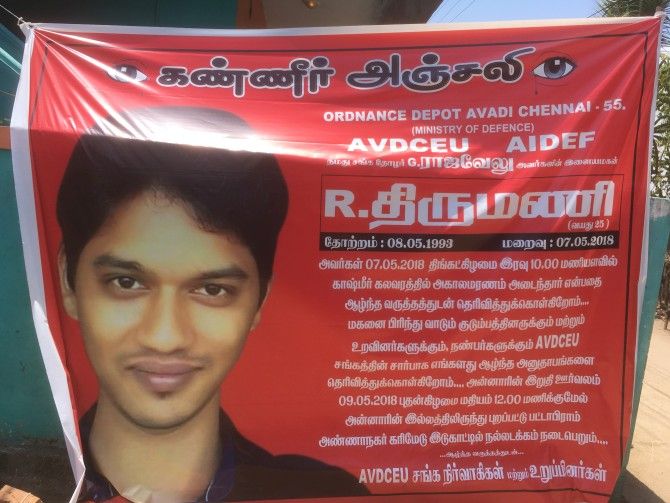 IMAGE: A banner in Avadi pays tribute to R Thirumani, the 25-year-old Chennai native who was killed in stone throwing in Srinagar on May 7, 2018. Photographs: A Ganesh Nadar /Rediff.com

"We have never been on a family tour. This was our first tour and I lost my youngest son," Rajavelu, who works in the Defence Ordinance factory at Avadi, Chennai, could not hold back his tears.

On May 7, his 25-year-old son, R Thirumani, who was visiting Kashmir as a tourist, was killed when a mob went on the rampage near Narbal on the outskirts of Srinagar and resorted to stone-throwing.

Thirumani, who was hit on the head by a stone, was taken to a hospital at Soura where he succumbed to his injuries.

When I visited his home in Karimadu Anna Nagar, a village on the outskirts of Chennai, the only sign of something miss was the presence of two television news network vehicles parked outside.

The house stands bright in otherwise staid surroundings, but that was the extent of it.

Inside, there was gloom and sorrow, with women seated on the floor lamenting the loss of a young life for no fault of his.

For the family, the Kashmir holiday was to be a memorable one, as they had never seen snow before.

A travel agency in Avadi had announced a tour and some 40 people from the area decided to go on it.

Of Rajavelu's three children -- two sons and a daughter -- his younger son Thirumani chose to go.

"I was planning to look for a groom for my daughter after this holiday," Rajavelu could not hold back his tears. 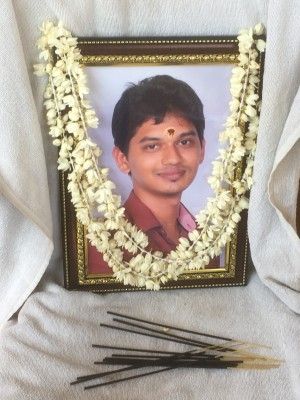 Thirumani, a commerce graduate, worked in Chennai. He was a quiet boy, not prone to speaking too much either at home or in the office.

"I checked his horoscope a few months ago, all was well, so I cannot understand why this happened. What do we have to do with the Kashmir problem? How does stoning us help their cause?" Questions to which none of the three assembled journalists had an answer to.

The tourists were met at the airport by five SUVs, and they were soon on their way.

Soon they realised they were in the midst of stone-throwing and everyone in the vehicle ducked.

When there was a lull Thirumani raised his head a little to look outside when a big stone hit him squarely on the head, near his eyes.

"They were men between 20 and 40 years of age, all of them tall and hefty. I will remember them all my life," Rajavelu recalls.

Seeing a group of policemen on the way the tourists stopped the vehicle and were immediately taken them to the nearest primary health centre where they realised the medical staff couldn't halt the blood flow.

The policemen then took Thirumani to a better equipped hospital in an ambulance. "There they stopped the bleeding, X-rays and scans were done. The doctor said there was nothing to worry as his brain and eyes were not damaged."

In the evening the doctors left, with the nurses staying behind, Rajavelu, below, says, "At 8 pm he was dead."

"I have not burnt my son, I have only buried him," says the grief-stricken father. "I am ready to exhume the body to learn the truth."

And the bitter memories come flooding back to him, in the form of questions and statements.

"There was no post-mortem, they just gave us his body. Even here no one suggested a post-mortem."

"Mehbooba Mufti, the chief minister of Jammu and Kashmir, met me, but the defence minister, who is a Tamil, did not bother. And I thought the army is taking care of Kashmir," says Rajavelu.

"BJP leader Tamilisai Soundararajan came here, but kept shouting for a garland. When it did not come, she gave interviews to the TV channels and left. Why did she come here then?"

"I noticed that the police cars in Kashmir have steel grills to protect their windows. If the police need protection, don't we need it too? Why can't they have grills on tourist cars?" 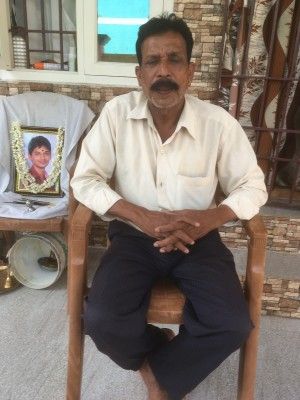 "If the situation was tense and the locality was volatile, why did the police not stop us from going through that area? They could have told us there is danger there and we should take another route. Why was the area not cordoned off?"

"We went there like any other tourists and left our son behind. Why did this happen? They are saying this has never happened before. We too have never gone on a tour before this."

"The central and state governments have announced compensation. I don't want that money. If they really want to help us, they should give government jobs to my other children."

"You know, he clicked so many pictures in Kashmir on his Samsung mobile phone. But we can't see them as we don't know how to unlock his phone."

"My wife also got hurt in the neck in the stone-throwing and got stitches. When we came back here we went to a local hospital where the doctor told us, 'They have used plastic thread to stitch her and the stitches are far apart. We normally use such far apart stitches after post-mortem to stitch together a dead body'."

A middle class family planned to see heaven on earth. What they didn't bargain for was it turning into a trip to hell.