News
Business
Movies
Sports
Cricket
Get Ahead
Money Tips
Shopping
Sign in  |  Create a Rediffmail account
Rediff.com  » News » 'Such harassment of journalists will continue for times to come'

'Such harassment of journalists will continue for times to come'

'No strong government (belonging to any party) likes to be held accountable (for their acts of commission and omission).'
'They just don't like anybody asking questions (of them).'
'This is the problem with strong governments' 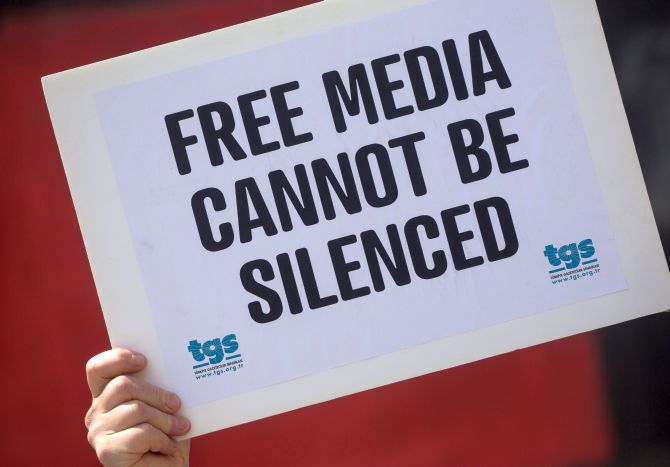 Soon after reports of FIRs being file against six senior journalists and a Congress MP for their social media messages related to a farmer's death on January 26 during the protesting farmers' Republic Day tractor parade in Delhi, in Uttar Pradesh, Madhya Pradesh, and now Delhi, reports of an FIR registered against another senior journalist for tweeting a report based on on the record conversation with the deceased farmer's, and shortly before that the detention of a journalist by Delhi police at the Singhu border have alarmed independent journalists across India.

Most of these FIRs were filed in states far away from where these journalists reside and particularly in the states where the ruling Bharatiya Janata Party at the Centre is in power, raising questions about the purpose of these FIRs as legal opinion believes these FIRs will fall flat in a court of law.

"If some governments want to harass people they can file an FIR anywhere they like," Senior Supreme Court Advocate Dushyant Dave tells Prasanna D Zore/Rediff.com.

Asked about the legal logic behind the FIRs, one of the charge being of sedition, filed against Rajdeep Sardesai (India Today anchor), Quami Awaaz Editor Zafar Agha, Caravan magazine Executive Editor Vinod K Jose, its founding editor Paresh Nath, Managing Editor Ananth Nath and senior consulting editor for National Herald, Mrinal Pande, Dave, who is the president of the Supreme Court Bar Association, says, there is no legal logic to such FIRs.

"Frankly speaking, newspapers are published in thousands of villages and thousands of cities. In all these places you can file an FIR. The entire purpose of filing these FIRs (far away from places where those mentioned in the FIR reside) is to demoralise journalists and scare them to fall in line (with the stand taken by governments on various issues)," he says.

The FIRs against these six journalists and the Congress's two-time Lok Sabha MP from Thiruvanathauram, Dr Shashi Tharoor, were for tweets related to the death of a farmer during the tractor protest.

"It is unfortunate that people or governments indulge in such filing of FIRs and try to silence the journalists," he adds.

Even as the media was coming to terms with these FIRs, the UP police lodged an FIR against The Wire Editor Siddharth Varadarajan for tweeting a link to The Wire report about the farmer's death, quoting the deceased farmer's grandfather.

"None of these FIRs will ultimately sustain; we all know that these cases will be ultimately dismissed in the long run. But these are enough to harass journalists. The Wire has reported something based on, I am sure, conversations with the family which must have been taped by them," says Dave dismissing the FIR as attempts by the Narendra Damodardas Modi government to silence journalists who ask questions.

"Based on such taped conversations if the report has been published, then it cannot be said to be with malicious intent; and which offence is committed by a wrong report? One can understand somebody privately filing a defamation case against something, but there is no public offence involved here to my mind," says the Senior Supreme Court advocate.

Ask Dave about how these FIRs amount to harassment and he says: "Don't ask such questions. In India, there are cases (like these) pending for more than 30 years."

Dave, who has himself been subjected to several smear campaigns for the legal causes he has espoused as a lawyer, says, "The writing is on the wall. Such harassment of journalists will continue for times to come. You are seeing it; it's the writing on the wall."

"No strong government (belonging to any party) likes to be held accountable (for their acts of commission and omission). They just don't like anybody asking questions (of them). This is the problem with strong governments."