In 2014, young Muslims became Owaisi fans.
But five years of BJP rule and a weakening Opposition have drawn older Muslims too towards the AIMIM chief.
Not enough, though.
Jyoti Punwani reports. 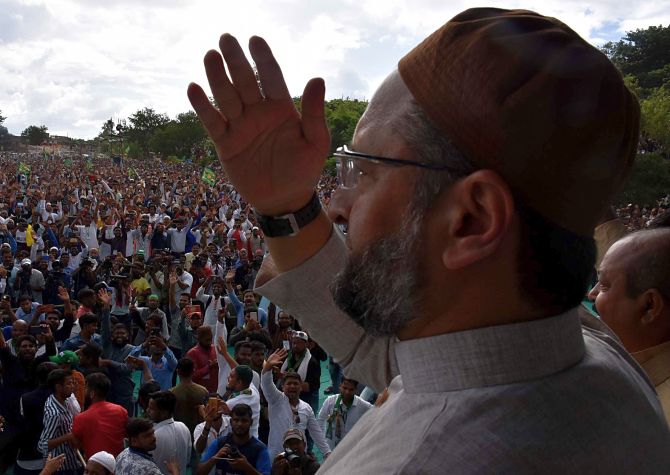 Has Asaduddin Owaisi failed in Maharashtra? His MLA tally remains at 2, the same as in 2014.

Additionally, both his MLAs from 2014 are no longer MLAs.

This time, the Hyderabad MP, for whom Maharashtra has become a second base, ambitiously put up 51 candidates.

Owaisi campaigned intensely in the state, with special emphasis on Byculla and Aurangabad, important constituencies for him.

His historic win led to Aurangabad being seen as the next AIMIM bastion, after the Owaisis's home city Hyderabad.

But all the three party candidates lost in Aurangabad.

Byculla MLA Waris Pathan had become the AIMIM's face in Maharashtra, building up a reputation for rough and ready language and methods.

"It was important for Owaisi that Pathan wins," said S Khan, a social activist from the area.

Despite his leader's efforts, Pathan lost.

Though they lost, the vote shares of three of his candidates went up.

While Waris Pathan and Dr Abdul Gaffar Quadri from Byculla and Aurangabad East scored more than they had in 2014, Naseeruddin Siddiqui also got a higher vote share from Aurangabad Central, the seat Imtiyaz Jaleel vacated when he became MP.

This despite Pathan being disliked for having squandered his five-year term, and Siddiqui facing opposition from within the party itself.

In Malegaon Central, winning AIMIM candidate Mufti Ismail was known as a non-performing NCP MLA from 2009-2014, when he was defeated by the Congress's Asif Shaikh.

Campaigning for him, Owaisi barely referred to Mufti, asking only for votes for himself.

Ismail beat his Congress rival, one who is seen to have worked, by almost 40,000 votes.

No one from his party helped Shaikh counter Owaisi's tirades against the Congress.

Perhaps no other result shows Owaisi's sway over Muslims than that of Faruk Anwar Shah from Dhule City.

Despite being a replacement candidate, he got 29% of the vote in a city where Muslims comprise 30% of the population.

"No Muslim voted for any other party," said a Dhule activist.

"Shah barely spent Rs 10 lakh on his campaign. Muslims campaigned for him voluntarily. Even slum women, who don't move out to vote unless brought out by party workers, went to vote for him on their own. The voting percentage in Muslim areas was 62%."

"It wasn't him," added the activist.

"Had the AIMIM nominated even a pen, Muslims would have voted for the party, because every vote was a vote for Owaisi."

Given that, the two cases of Indian Penal Code 307 (attempt to murder, for which charges have been filed) and one each of theft and arson against this former deputy mayor seem to have hardly mattered.

Yet, not all the fervor of Dhule's Muslims would have helped Shah win had there not been three Hindu candidates vying for the city's Hindu votes.

The split in the 'Hindu vote' is also the reason Jaleel won in 2014, and partly the reason for his victory in the Lok Sabha elections this time.

The second reason was the backing Jaleel got from the constituency's Dalits.

He was the candidate of the AIMIM-Vanchit Bahujan Aghadi alliance, and Dalits had been ordered to vote for him.

The alliance was called off by Jaleel in September after Ambedkar offered only 8 of the 243 seats he contested to the AIMIM.

The split hurt the AIMIM more than the VBA.

For without the VBA, the AIMIM cannot hope to get votes of other communities. 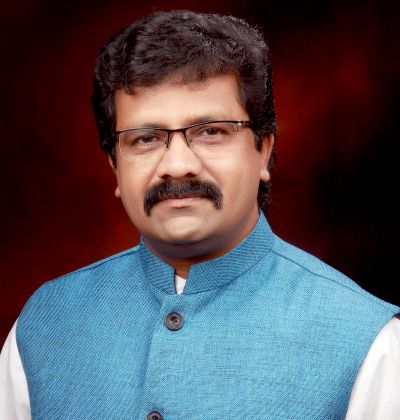 A well-known activist in Nanded, Ahmed had worked for the AIMIM-VBA alliance during the Lok Sabha poll, helping defeat Congress strongman Ashok Chavan.

Asked whether the split with the AIMIM had damaged his chances, Ahmed replied with an emphatic "No".

"The AIMIM would have immediately driven away my non-Dalit, non-OBC Hindu voters," he said.

Owaisi's polarising effect is why as many as 23 Muslims chose to stand on a VBA ticket in the assembly poll, including those like Mumbai activist Aamir Edresy who had worked for the AIMIM earlier.

"Please note that not only did Prakash Ambedkar give more tickets to Muslims than the Congress or NCP ever have, but most of these were educated Muslims," said Ahmed.

It seems Owaisi has a long way to go to win over his community in Maharashtra.

While his candidates may win in Muslim-dominated constituencies such as Malegaon, to win even in constituencies with a substantial Muslim vote, other factors must come into play.

One is Muslim anger against the Congress.

Yet, at its peak in the 2014 Lok Sabha and assembly elections, all it got Owaisi was two winners and two runners-up.

This time, both during the Lok Sabha elections and the assembly elections, Muslims were desperate to help the Congress-NCP emerge as a viable alternative to the BJP-Shiv Sena.

But with its strongmen fighting for survival in their own turfs, as a party, the Congress seemed unwilling to take on the ruling alliance.

Additionally, the exodus of Congress and NCP bigwigs to the BJP left everyone demoralised.

Yet, even this state of affairs didn't help Owaisi retain his two 2014 seats, or increase his tally.

Incidentally, Byculla MLA Waris Pathan's defeat can be seen as a parallel to that of the AIMIM's 11 corporators elected in 2012 in Nanded.

After making a sensational debut for the party in the state, they were voted out five years later, despite the ominous presence of a Hindutva ruling party at the state and the Centre.

In Maharashtra, religious bombast seems to have only a one-time appeal, if not followed up by work on the ground.

To be fair, during the assembly election, Owaisi was handicapped by his younger brother's absence.

The ailing Akbaruddin is in charge of Mumbai.

Says a young worker who has stayed with the party since 2014, "Crowds gather only because of the two brothers. We need to develop local leaders who can attract people."

Jaleel was a prime example of such local leadership, but with all three Aurangabad candidates having lost, his stature may well diminish, leaving the party again dependent on Asaduddin Owaisi.

And with Owaisi comes polarisation and Hindu consolidation.

Neither his oratory, be it during election rallies, in Parliament, or on television channels nor his exploitation of feelings of victimhood among Muslims, alongside his propagation of the myth that he alone speaks for them, has helped the AIMIM chief win more than a fraction of the Muslim vote in Maharashtra.

"Throwing our lot with the AIMIM will only isolate us and help the divisive politics of the BJP," says a senior Mumbra activist. But five years of BJP rule and a weakening Opposition have drawn older Muslims too towards the AIMIM chief.

Indeed, more and more Muslims are asking: How has this strident opponent of the prime minister been left untouched by the enforcement directorate, which has been unleashed on many Opposition leaders?

How is it that that while those who post harmless stuff on Facebook get arrested, the brothers Owaisi, known for their high-pitched rhetoric, are not even touched?

How come Owaisi, who speaks constantly about Muslim representation, ends up contributing not only to the defeat of Muslim MLAs and MPs, but also to the victory of Hindutva candidates?

This time, the biggest such defeat was that of five-term Chandivli Congress MLA Naseem Arif Khan by a mere 409 votes, thanks to the two Muslim candidates put up by the AIMIM and the VBA.

For AIMIM workers in Mumbai, it was a dream finally come true.

So was it for the Shiv Sena who won the seat.