'My age? It keeps changing every year. I can't remember it. I don't like ageing at all,' the legendary dancer Mrinalini Sarabhai, who passed into the ages on Thursday, told Jasmine Shah Verma in October 2004. 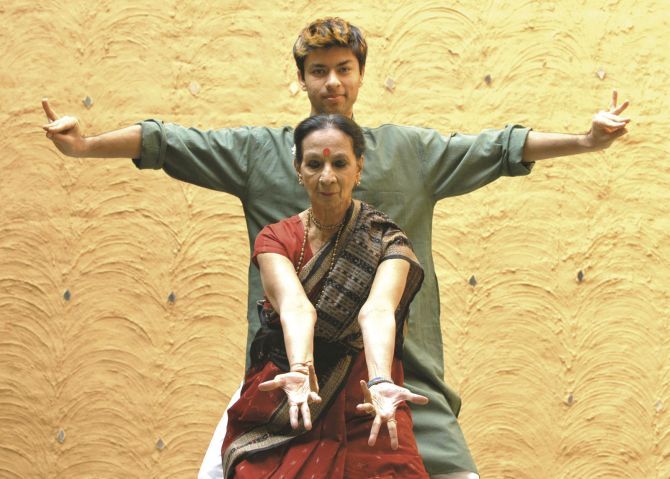 As a beautiful Japanese parasol emerges from a distance in the spacious complex of the Darpana Academy of Performing Arts, Ahmedabad, students tighten their dupattas and roll up their sleeves. Their guru, Mrinalini Sarabhai, or 'Amma', as she is referred to, is on her way. The parasol is present everywhere she goes, there's even one in her car.

"I have always loved using parasols and umbrellas," she says. "I have about 25 to 30. I bought some of them, and many have been gifted by friends."

Her fetish for parasols and hand fans is perhaps one of the few things that people don't know about 86-year-old Mrinalini Sarabhai -- dancer, choreographer, poet, writer, environmentalist, humanist and teacher. Her autobiography, scheduled by HarperCollins for an October release, will fill in the rest of the gaps.

Sarabhai's close friend Vijaya Mehta, reputed film and theatre director and director of the National Centre for the Performing Arts, Mumbai, says: "In most people there is a clear divide between their creative life and what they are as a person. But Mrinalini is a total human being."

"I hope my autobiography interests people," says Sarabhai. The story of her life, peopled by stalwarts she has learnt her craft from, is likely to be a good read.

She has learned Bharata Natyam in the Pandanallur tradition from Sri Meenakshi Sundaram Pillai, considered the master of this classic style; Kathakali from the great Asan Kunja Kurup; Mohiniattam from Kalyanikutty Amma, the doyenne of this ancient tradition; and her worldview from Rabindranath Tagore in Santiniketan.

Born Mrinalini Swaminathan, she married scientist and industrialist Vikram Sarabhai, called the 'father of the Indian space programme', in 1942. In 1948, the couple set up Darpana, an academy of dance, drama, music and puppetry, in Ahmedabad. 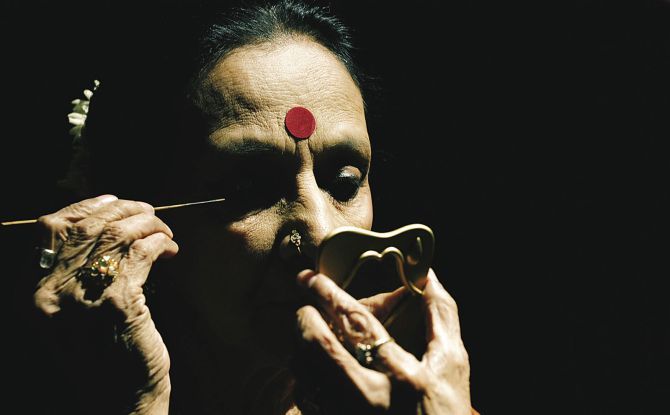 As a dancer, Sarabhai was the first classical dancer to turn to choreography. "New dance forms evolve," she once said. "But I would prefer that while you evolve a new form, there be some classical traditional behind it. A tree may grow in many directions, but it must grow with roots. This is what I think I have done."

Sarabhai calls dance her stress-buster, and at 86 still dances for two hours every morning. Earlier this year in Mumbai, she performed Two Lives in Dance and One More (Samabhavana) with daughter-dancer-choreographer Mallika and her daughter Anahita, a biographical dance drama where the three interact, sing, and dance, telling the story of their lives. Grandson Revanta, who studies in the US, also performs with the family whenever he's home.

"My mother unknowingly started a legacy," says Mallika. "The atmosphere of Darpana all around them when they were growing up certainly influenced my children." And her? "There is a little of the guru-shishya aspect in our relationship, but we are partners and co-creators too. We respect each other's creativity though we may not agree on the form."

For this family, dance is the language of life. "Dancing breathes new life into me every day," Mrinalini Sarabhai believes. "It is an experience of rejuvenation."

Another thing that rejuvenates her is the outdoors -- Sarabhai is claustrophobic. "It may have been a result of my childhood. I used to be locked up in the bathroom when I was naughty," she says with a chuckle. Former student and a dancer in her troupe, Poornima Kantawala, 65, say, "When we travelled by air for performances, she would be the first out of the door once the place had landed. She always looked for fresh air and open spaces."

Natarani, the open-air theatre at Darpana, is a culmination of this search. "Mallika designed Natarani to reflect my personality with its vast open spaces, peepul tree and the rivers beyond."

Like Natarani, Sarabhai's lavish home in Ahmedabad echoes her taste with its assortment of Indian handicrafts, and finely sculpted Ganesha and Nandi idols.

In her study, posters from her performances tower on the wall behind her busy writing desk while Sarabhai tends to the paperwork of the academy, sitting in a commanding pose. She is in charge here, and doesn't like it one bit if you talk about uncomfortable topics like age.

"My age? It keeps changing every year. I can't remember it." And then she adds: "I don't like ageing at all." She's quite happy when you steer the conversation to her slim figure, though.

"I've managed to retain it because of constant practice. It's important for a performer to look good. That doesn't mean have to do a lot of make-up."

But clothes, that's a different matter. She is noted among friends for her exclusive sari collection and unusual jewellery. For footwear, Sarabhai swears by the flat Kolhapuris and simple Gandhi chappal bought from the Sabarmati ashram. "I think it stems out of a dancer's need to have comfortable feet at all times." 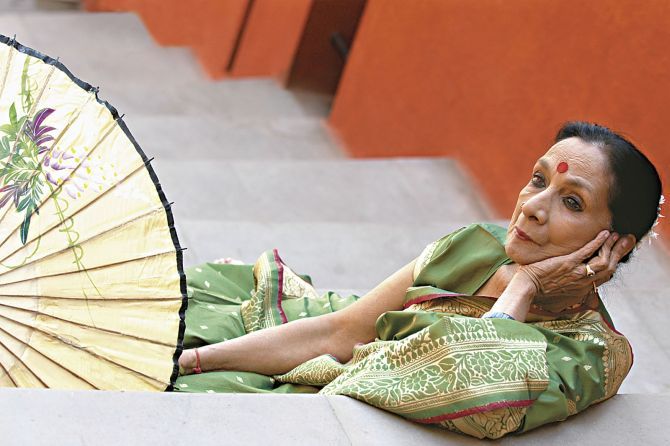 When she's not dancing, Sarabhai reads. "I have read all the English classic and love authors like Jane Austen, Dickens and, of course, Shakespeare." Today, she enjoys light novels by Dick Francis and John Grisham, Hindu and Buddhist philosophy, and cookbooks.

Ask her some favourite recipes, and she tells you to wait for her own cookbook. When, and if, that materialises it will be one in a long line of books she has written -- on dance, mythology, poetry, and even a collection of letters exchanged between Sarojini Naidu and Mahatma Gandhi.

"Writing and dancing are two parts of my personality," she says. Sarabhai has also set up the Centre for Non-Violence through Performing Arts at Darpana, which seeks to spread the message of peace and non-violence through the arts, and heads a nature club named Prakriti, which encourages tree planting and forestation among children.

She spent the last Makar Sankranti (the festival of kites) standing on a terrace under the hot Ahmedabad sun, flying kites with street children. "You have to go beyond yourself and reach out to others who need you," she says.

Mallika, though, has her own take on her mother: "I believe she only really lives when she dances." 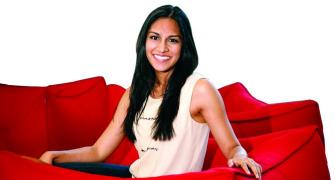 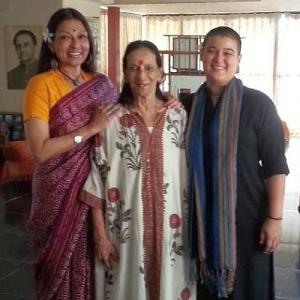 V Gangadhar: The Ahmedabad I knew