This week, China and the Maldives signed a Free Trade Agreement that took India by surprise.
'Agreements signed between the Maldives and China have seriously worried India,' reports Aditi Phadnis. 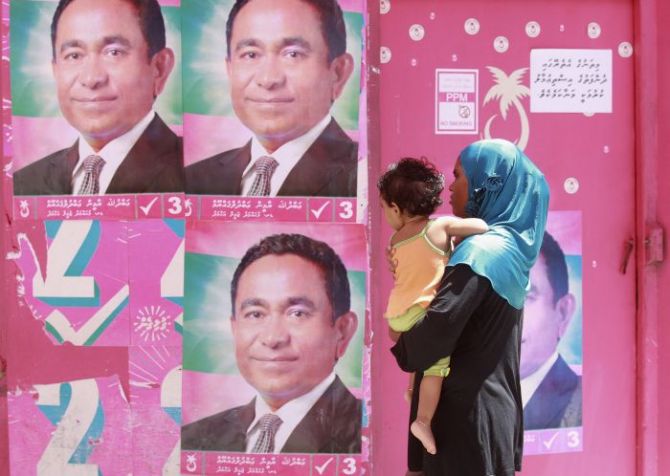 IMAGE: A scene from Male, the Maldivian capital. The man in the posters is Abdulla Yameen, the Maldives' president. Photograph: Reuters

Mohamed Nasheed, ousted president of the Maldives, living in exile, and the man who tried to propel Maldives towards a multiparty democracy, was in India recently. The Maldives is in a political shambles. And all Indians ought to be concerned.

The Maldives was a single-party State until 2008. The executive was in charge of the civil service, the security forces and the judiciary. It also had control over parliament through a 'constitutionally appointed' group of members of parliament.

The country was ruled for 30 years by Maumoon Abdul Gayoom.

This was challenged by Nasheed who became president of the Maldives after forming his Maldivian Democratic Party in exile, contesting the 2008 presidential elections and winning 54 per cent of the vote.

A new constitution was formulated, but in 2012, Nasheed was overthrown with the help of the security forces and put under home detention.

For several hours afterwards, Nasheed sought 'refuge' in the Indian high commission, making India a factor in the internal politics of the Maldives.

Nasheed was in prison for nine months; he was tried and found guilty of terrorism and given a 13-year jail sentence.

He then sought to go to the UK for surgery where he sought and got the status of a refugee. If he returns to his country he will be arrested to serve the rest of his sentence.

Not surprisingly, this caused a vacuum in the MDP's top leadership.

Meanwhile, Yameen became very active on the foreign policy front, hoping foreign powers would help secure his own position if it was threatened.

Chinese President Xi Jinping's September 2014 visit to the Maldives was his first visit to South Asia, signalling the balance of power dimension to India.

Xi was accompanied by a 100-member business delegation and mooted the idea of a Maritime Silk Road connectivity between China and the Maldives.

As this required land, the Maldives constitution (which previously prohibited foreign ownership of any part of Maldivian territory, but allowed leasing of land for up to 99 years) was amended to allow foreigners, who invest more than $1 billion, to buy land within the project site, the only condition being that at least 70 per cent of the area of the completed project must be reclaimed land.

Chinese tourists are flocking to the Maldives. This is part of the plan.

Other agreements signed between the Maldives and China have seriously worried India like the Maldivian offer to China to develop its main airport as part of its iHaven project.

India's GMR had earlier got the contract to build the same airport, later cancelled and taken to international arbitration that GMR won.

GMR got the contract during the Nasheed administration and lost it when Nasheed was overthrown.

Prime Minister Narendra D Modi and Yameen signed a defence agreement. This was nothing short of a dramatic turnaround.

Barely a year earlier, India had almost openly sided with the Nasheed administration, going so far as to lobby with the Commonwealth Ministerial Group to sanction the Maldives for overthrowing Nasheed in a 'coup' (Yameen responded by quitting the Commonwealth altogether).

India and China are not the only countries in the mix. The Maldives is an Islamic republic and is 100 per cent Sunni.

The first Maldivian embassy in Riyadh was opened only in 2014, but it was the first embassy in any Middle Eastern country.

And after the constitutional amendment in 2015 allowing foreigners to own land, Saudi Arabia has drawn up plans for a massive integrated development project in the Maldives, fuelling speculation of the sale of Faafu Atoll to that country.

Following his visit to the kingdom in 2016, Yameen had declared that the Maldives and Saudi Arabia are 'currently at the peak of diplomatic relations'.

The risk of this increased visible presence of Saudi Arabia is that it could have an even more radicalising effect on the Maldives' young population: Already, hundreds of young Maldivians are in Syria to join Is.

A Maldivian national, Ibrahim Fauzee, imprisoned in Guantanamo Bay for his connections with Al Qaeda, has since been released and runs an Islamic Foundation in Male.

Politician-entrepreneurs have not really allowed the Islamic clergy to play a role in politics.

Maldives will see presidential elections in 2018. India will be watching the outcome closely. 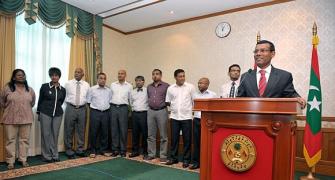 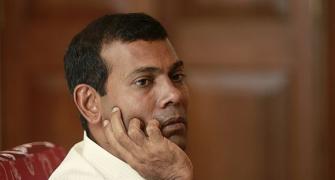 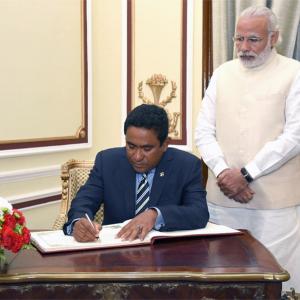