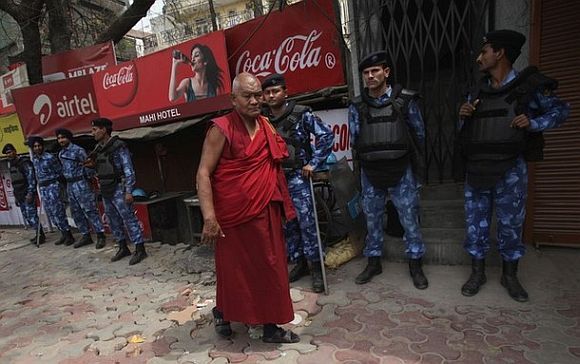 The promised land of Chushi Gangdruk looks like the Shangri-la of fable.

But like a distant dream overwhelmed by gritty reality, this is a picture contained in a wooden frame. It hangs on a wall of Jangchup Dorjee's coffee shop in the settlement of Majnu ka Tila, the heart of everything Tibet in Delhi.

"This is where I lived," Dorjee points to a monastery in the picture, a modest hut on a hill top.

The photograph of Ga-Kyegu city in Chushi Gangdruk, which means 'six ranges and four rivers', dates from Dorjee’s trip to Tibet in 2005.

The place is better known as Kham province, a historic region in eastern Tibet where Dorjee's family once lived, and which now stands divided between the present-day Tibet Autonomous Region and Sichuan under the Chinese administration.

Dorjee had gone to Tibet to meet his uncle Somdup Chophenl, a Khampa warrior who fought with the Tibetan army during the uprising of 1959. Thousands were killed and Chophenl was captured and jailed for 25 years.

Dorjee's father, a local king sworn to protect the Dalai Lama, fled Tibet in 1958 with his wife and two daughters following the Dalai Lama and his entourage. One of the two girls died en route.

The group entered India in Assam, where Dorjee was born seven years later.

The family moved into a refugee settlement in Delhi's Majnu ka Tila a few years later where Dorjee now owns a coffee house as well as a popular guest house.

While he has built a life for himself in India, Dorjee says he would readily give it up if the Dalai Lama were to return to Tibet.

"India is a home away from home," he says. The photo on the wall continues to enchant him. 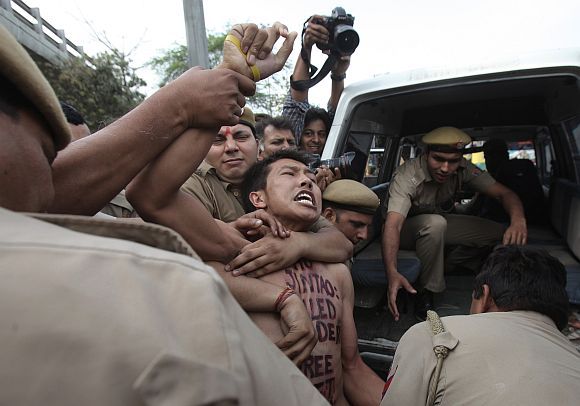 IMAGE: A young Tibetan is detained by Delhi police during a protest outside the hotel where then Chinese president Hu Jintao was staying in March 2012. Photograph: Adnan Abidi/Reuters

The Free Tibet Movement has been emblazoned across the minds and bodies of three generations of Tibetan exiles over the last 60 years.

Although they remain united in the battle cry for a freedom that would vindicate their peaceful stand against injustice, it has been a steep climb with the peak nowhere in sight.

In the 1970s, Dorjee and his college mates would take to Delhi's streets to raise pro-independence slogans. This job is now his nephews'.

Dorjee concerns himself with strengthening the community economically and bequeathing Tibet's rich history and Buddhist faith to the next generation. His 86-year-old warrior uncle is writing a book that documents the freedom struggle.

Unlike the Dorjee family, though, what was once a cause célèbre among students and radicals, young and old, Tibetan and not, can appear to have lost steam along the way, both within and outside the community.

China's occupation of Tibet is no longer news; intellectuals and arm-chair rebels are more likely to be found discussing Taiwan and Hong Kong's chafing at their own Chinese reins. Human rights violations in Syria and Myanmar, the repressiveness of West Asia, statelessness in Gaza, poverty in Sub-Saharan Africa and the conundrum that is North Korea keep foreign correspondents and humanitarian organisations busy.

The Tibetan movement is losing its radical recall value. '

Five out of six shops in Majnu ka Tila do not stock a 'Free Tibet' T-shirt.

Among a certain set till just a few years ago, it was virtually obligatory to own one, a prized possession along with that other classic of radical chic, a Che Guevara tee.

While at Delhi University a couple of decades ago, 43-year-old Ugyen Tsewang wore his Free Tibet T-shirt proudly at an anti-China street protest. He spent the next three days in Tihar jail, in the same clothes.

"It felt like a free Tibet was in sight," says Tsewang, who now lives in South Delhi's Kalkaji with his wife and daughter and works as a manager at the government's Tibetan medical and astrology unit.

Delhi has always been the epicentre of the pro-Tibet struggle. It consolidates the national and international media, houses the obvious target in the form of the Chinese embassy and hosts offices of Chinese technology firms.

"Chinese censorship is robbing the Tibet movement of its newsworthiness," says Tsewang. He hasn't lost hope, but the dream of a fully independent Tibet is becoming dimmer. 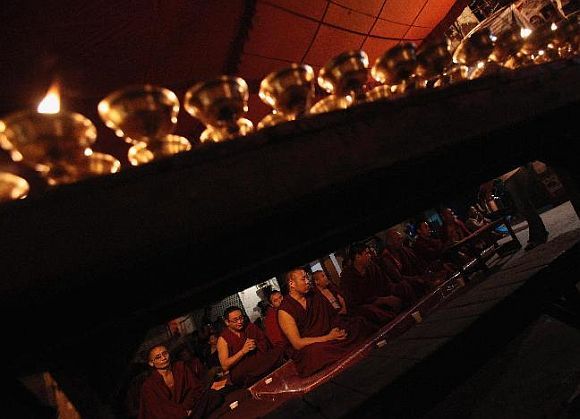 IMAGE: Tibetan monks in Majnu Ka Tila at a prayer meeting for Jamphel Yeshi, who set himself on fire during a protest against then Chinese president Hu Jintao's visit in March 2012. Photograph: Adnan Abidi/Reuters

People in Tibet have restricted communication with the rest of the world. Exiles who have families in Tibet communicate mostly though WeChat, a Chinese messaging app. The conversations, activists say, are monitored by the Chinese government.

The Chinese State proscribes the possession of as much as a photo of the Dalai Lama -- the man whom India deems a 'most esteemed and honourable guest' and whom the Chinese refer to as a 'wolf in monk's robes' and 'secessionist chief'.

The Dalai Lama's 60 years in exile have long been a sore point in relations between the two countries. But recent events such as the 73-day standoff in Doklam near Tibet and Chinese President Xi Jinpings further solidification of power are reverberating in Indian political circles.

Few now speak against the Chinese government and the job of building international pressure on China is left to the 192,000-strong Tibetan Diaspora.

But till recently, freedom of expression was not a challenge for the 94,000 Tibetans living in India. IMAGE: Despite a government directive, Minister of State for Culture Mahesh Sharma and Bharatiya Janata Party General Secretary Ram Madhav attended the 'Thank You India' event in Dharamshala, organised to mark 60 years of His Holiness The Dalai Lama's exile.

The Indian government recently spurned a 'thank you, India' event for providing shelter to the Dalai Lama and his followers.

"India and China have an understanding when it comes to Tibet, which is to not talk about it," says Lobsang Sangay, president, Central Tibetan Administration.

The Dalai Lama was to preside over a prayer-meeting at Rajghat, which was unceremoniously shifted to McLeodganj (Dharamsala) in Himachal Pradesh, where Sangay runs a government in exile.

"This was done out of respect for India and keeping in mind its diplomatic position with China," says Sangay, at pains to defend India's stance on Tibet, which he maintains has not changed.

Dharamsala, too, has a large population of Tibetans. The hill town is proxy for a paradise lost.

It is home to the Dalai Lama, the seat of the Tibetan government in exile, has the oldest Tibetan settlement in India and attracts Tibetan Buddhists from around the world.

It is affectionately called 'Little Lhasa'.

Tenzin Tselha, national director of Students for a Free Tibet, a non-government network of students and activists headquartered in New York, works out of its office in Dharamsala.

The 30 year old has been spearheading advocacy and nonviolent direct action campaigns for the last seven years and is unaffected by India's tiptoeing around the Tibet issue.

"We protest against the illegal occupation of the Chinese in Tibet and the police detains us. Both are just doing their jobs," says Tselha.

SFT has 200 chapters across India with over 5,000 Indian members. She agrees that some Tibetans are finding a way out of India for education and better life prospects, but says the movement continues to get great support from Indian students.

"The activism today has become multi-faceted by way of social media. We are reaching out to more people than ever, even though you don't see them on the streets every day," says Tselha.

Revathi Hariharan, 24, a Delhi-based journalist, interned with SFT in Dharamsala while in college.

She created content for SFT's campaign, organised film screenings and documented interviews with exiled Tibetans who had served jail terms.

Her enthusiasm for the cause is now tempered by nuance. "The Chinese government is not loosening its grip over Tibet. The messaging should focus on pushing through smaller reforms like religious freedom rather than asking for complete independence," says Hariharan. 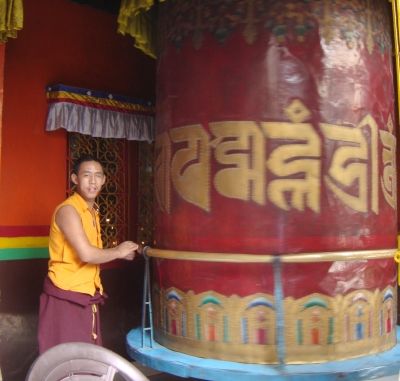 In Delhi, Dharamsala, Ladakh, Arunachal Pradesh or even Karnataka, children in Tibetan settlements have received education within the large network of Tibetan schools.

They are taught about the Tibetan struggle in different scripts of the Tibetan language. Participating in the Tibetan National Day of Uprising on March 10 begins with scholarly dutifulness, but grows to emotional involvement.

Thousands take to the streets to protest peacefully every year.

Even as the Tibetan Diaspora continues to fan out in search for a better future, the strength of their bond lies in their identity.

The Indian government issues a registration certificate to every Tibetan who comes to India or is born here, which has to be renewed every year.

But in 2016, the Delhi high court ruled that all Tibetans born in India between January 26, 1950 and July 1, 1987, as well as children born post that date to India-born Tibetan parents, be considered Indian citizens and issued passports under the Citizenship Act. IMAGE: A Tibetan exile shouts Free Tibet slogans from a police vehicle after being detained during a protest against then Chinese president Hu Jintao's visit in March 2012. Photograph: Adnan Abidi/Reuters

But even the lure of having a country to call their own, which also affords easier access to the rest of the world, has not induced most Tibetans to trade their RCs for Indian passports.

Tenzin Zedhen, 32, a mother of two in Delhi; Tenzin Tedekyong, 22, born and resident in Karnataka; and Pema Wangchuk, 31, a café owner in Dharamsala, and several activists and students who were contacted for this report have not considered giving up their Tibetan identity.

All said they would leave for Tibet if the Dalai Lama did.

Tenzin Dechen, 31, works for the Norbulingka Institute in Dharamsala, where she learned traditional Tibetan craftsmanship.

Dechen says a lot of Indian-born Tibetans don't feel quite at home in India. And Tibet, the home they have never known, is a land they don't yearn for either.

"Third-generation Tibetans, who did not go to Tibetan schools, never experienced the Buddhist way of life and have never been part of the freedom movement see Tibet as an unprogressive and alien place," says Dechen.

Yeshi Dolma is one such 19 year old, who has a tourist visa to France where she plans to seek political asylum. She knows Tibet only as a place where her grandparents once lived.

She attended a private school in Delhi, then NIFT in Bengaluru and never participated in protests.

"Neither have my friends and a lot of them are Tibetan," she says.

But 22-year-old Lobsang Dawa, an undergraduate at Delhi University who leads the Delhi chapter of SFT, remembers Tibet as a beautiful life he and his family had to abandon abruptly in 2008.

He paints a picture of a utopian land, not dissimilar to the photograph in Dorjee's coffee house.

Dawa and the people who know Tibet like he does will continue to fight the good fight.

Some names have been changed on request. 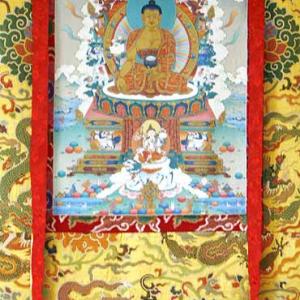 'When Tibetans think of a place of refuge, they think of India'