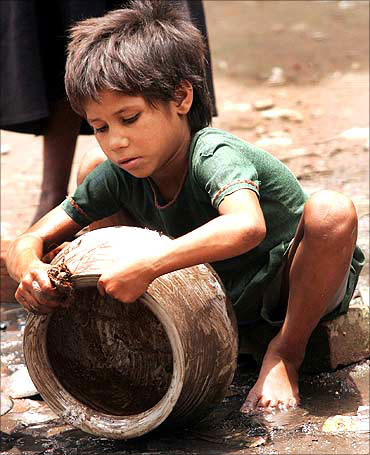 "We don't discern a definite trend in child labour just going by the number of children rescued or persons arrested as that has been volatile over the years," says Sadanand Date, deputy commissioner (crime), Mumbai police. "But the instances of children employed in the city are not insignificant, so as more proactive action is taken, those numbers will show an increase. Overall, child labour is a challenge that exists."

Just days after Kailash Satyarthi won the Nobel Peace Prize for his campaigns against child labour, photographs captured barefoot children clearing waste from the Yamuna. A five-part series looks at the issues plaguing the rescue and rehabilitation of child labour.

Mohammad Saddam Husain dreams of a career in the Indian Railways, though his hopes of a normal childhood were crushed when he boarded a train to Mumbai less than a decade earlier. An acquaintance had lured him to the 'city of dreams' with the promise of money. Husain, 12 at the time, ended in a dingy zari-making workshop in the locality of Govandi, working for two meals a day and less than Rs 100 a week.

He would spend a bleak year-and-a-half there, minus a shirt at times to fight the heat, attaching glittery string and sequins to someone else's clothes for 13 hours daily. In 2005, after conditions in similar establishments caused the death of two children, a crackdown began that led to Husain being freed. Now a 20-year-old studying political science in his home state, Bihar, he is focusing on brightening his future.

Before strict action began around 2005, as many as 60,000 children were employed in Mumbai's zari workshops. The units -- clustered in Byculla, Dharavi, Govandi and Kurla -- were uniformly cramped and stuffy. The children would sew for hours on fabric stretched across a khatiya. Their tiny hands were thought ideal for executing intricate designs. They would sleep in the workshop, too, saving the owners an added expense on rent. Children argued less and carried out extra duties like cooking meals, cleaning the floor or filling water. They were also vulnerable to physical and sexual abuse.

Agents such as the one who brought Husain to the city still operate, though zari-making is not as big a culprit as before -- it now relies more on machines. Navnath Kamble of Pratham, a non-government organisation which rescues and educates vulnerable children, says bag-making workshops are now a major employer. Bakeries, leather goods makers and small hotels come next. Most minors are from Bihar, Uttar Pradesh, Rajasthan and Bengal; a few come from Bangladesh and Nepal. Large families without enough means often send children to work early. Parents are equally responsible in many cases, says child rights activist and lawyer Vikas Sawant.

At Patra chawl opposite Byculla station in Mumbai, the impoverished lanes are dotted with units stitching bags for various things like suits, saris and jewellery. The Child Labour Act says children up to age 14 can work in non-hazardous industries for three hours, take a break of an hour and do another three-hour shift. This on its own is questionable but here children cut fabric or stack bags for as many as 13 hours at a stretch. The young ones join as shagirds or apprentices, while the experienced karigars run the sewing machines.

Obedience seems to be the language of communication, as the little workers seek the approval of seniors before even saying their names. "He arrived only recently and will be going back soon," one workshop owner says, speaking for a child of about 12. "He was enrolled in a madrasa but does not attend."

There are multiple challenges for agencies fighting child labour. Locating the establishments is difficult as most are unregistered, says an official of the Child Labour Cell in Mumbai, who did not wish to be named. In Patra chawl, they typically occupy the upper floors of tenements, accessible only by using rusty iron steps or dodgy ladders. "These are makeshift operations which can pack up and move quickly before action is taken," adds the source. Rehabilitation facilities are lacking and children have to be put up at overcrowded remand homes. Once children are returned to their parents, NGOs say they lack the manpower to follow on each case. Based on findings by Childline, the official numbers on child labour are often skewed because of problems in identifying those engaged in private homes.

Months after exploitation and disease claimed the lives of Afzal Ansari and Ahmed Khan in Govandi's zari unit, former deputy chief minister R R Patil created a child labour task force in 2005. It has members of the police, labour department and NGOs. Experts report a decrease thereafter in the cases of child labour surveyed in the city. Though there are no official numbers, data collected by Pratham suggests 4,600 children are working in the city, of which 2,000 help make bags and about 700 make zari. Another positive, according to Sawant, is that the age of children employed is towards the upper end now as compared with previous years -- more are found between ages 12 and 14 versus children as young as six and seven picked up earlier. As crackdowns in Mumbai gather steam, child labour traffickers are said to be going to Ahmedabad.

"We don't discern a definite trend in child labour just going by the number of children rescued or persons arrested as that has been volatile over the years," says Sadanand Date, deputy commissioner (crime), Mumbai police. "But the instances of children employed in the city are not insignificant, so as more proactive action is taken, those numbers will show an increase. Overall, child labour is a challenge that exists."

Police records say 599 children have been rescued so far in 2014 versus 329 last year. Through an agreement with the Bihar government, Mumbai is aiming to combat trafficking at the source. In a pilot programme launched this year, the task force is also giving workshop owners one month's time to let go of child labourers. This chance to avoid legal action is expected to build co-operation.

Kishore Bhambre, director of Pratham's Council for Vulnerable Children, says rescued children show enthusiasm for education at the NGO's Patna shelter. In the workshop where a crack in the asbestos roof provided air circulation and the lone window offered views of a wall, Husain had no scope to dream but he rues that lost time only fleetingly. There is an exam he needs to prepare for.