'The EC is a sacred institution.'
'In the last few years, more than once, we have found the EC bending over backwards to accommodate the government.'
Archis Mohan reports. Sukumar Sen, the first chief election commissioner of Independent India, put in place the structure for holding elections in an overwhelmingly illiterate and feudal country.

If Sen's legacy was the guiding light for the subsequent 22 CECs of India, the touchstone of success is being compared favourably with T N Seshan, the 10th chief election commissioner.

Seshan, who served from 1990 to 1996, brought about significant electoral reforms, primarily in curbing the use of muscle power that had come to mar the electoral process since the 1970s.

Sunil Arora, the incumbent CEC at Nirvachan Sadan, the headquarters of the Election Commission of India, hopes to follow Seshan's example by checking the rampant use of money power that has vitiated the conduct of free and fair elections in India.

Arora, a 1980-batch Rajasthan cadre Indian Administrative Service officer, is aware of the inevitable comparisons with Seshan, especially since he has taken over at a time when the Election Commission's famed bipartisanship is under a cloud.

Both politicians and bureaucrats who have known him hope his tenure would restore the poll panel's credibility.

Over the past couple of years, the Election Commission has faced sustained criticism and allegations, including over scheduling elections to favour a particular political party, disqualification of legislators in Delhi and "failure" to address concerns over Electronic Voting Machines, EVMs.

As a bureaucrat who rose to become the Cabinet secretary of India in 1989, Seshan was considered close to the Congress party.

But as India's chief election commissioner, with his job protected by the Constitution, Seshan transformed into a nemesis of powerful politicians.

An upset P V Narasimha Rao, who was the prime minister during much of Seshan's tenure, turned the Election Commission into a three-member panel and brought in M S Gill and G V G Krishnamurthy to tame Seshan.

Arora is quick to play down any comparisons, stating in his matter-of-fact manner that he is not "grandiloquent", likes to work under the radar, have his work speak for itself and would prefer comparisons once he completes his term, which is in 2021.

By then, Arora would have overseen the 2019 Lok Sabha polls, the biggest-ever democratic exercise in the history of humankind involving an estimated 900 million electorate, and at least 10 subsequent assembly elections.

Insinuations of his proximity to a particular party or leaders notwithstanding, Arora is proud of his record of 36 years in bureaucracy where political leaders of all hues would turn to him when faced with difficult situations.

In his home cadre, Arora has been the go-to person for chief ministers of the Congress as well as the Bharatiya Janata Party, including Bhairon Singh Shekhawat, Ashok Gehlot and Vasundhara Raje.

At the Centre, Arora has worked in key positions during the tenure of the Atal Bihari Vajpayee government, Manmohan Singh-led governments and the current Narendra Damodardas Modi government.

Officials in the EC say Arora, who took over as CEC on December 2, brings with himself circumspection, but is also quick at decision making when the situation demands.

He is known to follow up on issues, working late into the night, backs people to the hilt if their mistakes are inadvertent, but also takes them to task if they aren't.

One of them recalls how a few years ago, as the secretary of the newly setup skill development ministry, he went to a government hospital in a journalist's car to visit his driver who had taken ill on the job.

His patience was apparent at the press conference he addressed on March 10 to announce the 2019 Lok Sabha election schedule, where he answered all questions, even if they were asked repeatedly, for two long hours.

On electoral bonds, Arora says it is for Parliament to decide the law of the land, but that he is committed to inspecting the funding of political parties from corporations and big businesspersons after the elections.

If required, he has said he will get outside experts to help the EC in the matter.

Under Arora, the EC has sent a proposal to the Union law ministry that auditors appointed by the comptroller and auditor general, or CAG, should audit the funds of political parties.

In the coming polls, the EC is set to follow its regimen of asking central government enforcement agencies and the income tax department to monitor the use of money.

The EC has also asked candidates to file five years of their and their spouse's tax returns.

Criticism of the EC, however, is likely to increase as the election draws near.

Political parties have questioned the EC on the poll schedule and its decision to not hold assembly elections in Jammu and Kashmir.

"The EC is a sacred institution. In the last few years, more than once, we have found the EC bending over backwards to accommodate the government. This is why it makes it so critical to keep an eye on what the EC is doing," Swaraj India chief Yogendra Yadav says.

Yadav and several others have pointed out several "incongruities" in the poll schedule.

The phases in which the election is held in Maharashtra, two in 2014, have been increased to four.

In West Bengal, the number is up from four to seven, and in Odisha from one to four.

"Odisha and West Bengal are two states the BJP is eyeing, where it can improve. This staggered poll schedule in these states would help the prime minister address more rallies, and the impression is that it has been done with the BJP's convenience in mind," Yadav says.

The EC has argued that the security challenges in these states have changed.

Political leaders have pointed out that Odisha, with 21 seats and a small area affected by Naxalism, will have elections over four phases.

Compare that with Andhra Pradesh (25 seats) and Telangana (17 seats), which have more widespread left-wing extremism but are having elections in just one phase.

However, his peers remember Arora, who retired from the IAS in 2016, as someone capable of standing up to political leadership.

Arora is known for having turned around Indian Airlines when he was its chief managing director between 2002 and 2005.

He also served as joint secretary in the civil aviation ministry from 1999 to 2002 -- when IC-814 was hijacked to Kandahar.

During his stint in Rajasthan, Arora, who belongs to Punjab, was principal secretary to then chief minister Raje from 2005 to 2008.

His contemporaries there remember him ably defusing a communally charged situation at Nagaur in the late 1980s.

More recently, in 2016, as secretary in the information and broadcasting ministry, Arora tackled the student unrest at the Pune-based Film and Television Institute of India.

After his retirement in April 2016, he was advisor to Prasar Bharati and then DG and CEO of the Indian Institute of Corporate Affairs.

His current role as chief election commissioner might be his most challenging yet. 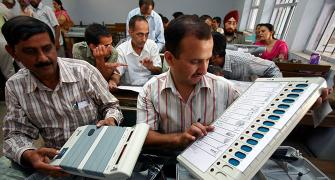