News
Business
Movies
Sports
Cricket
Get Ahead
Money Tips
Shopping
Sign in  |  Create a Rediffmail account
Rediff.com  » News » 'Because she was born on 26/11, I want her to grow up strong'

Goli is a special child, born in Mumbai's Cama hospital while the terrorists were raining bullets outside on 26/11.

Six years later, Vaihayasi Pande Daniel/Rediff.com and N V Reuben/Rediff.com find a family determined to give their children the best life they can afford.

Viju Chauhan, 33, never went to school. She can neither read nor write, she tells you ruefully.

It is not unexpected, then, to see the enormous pride this mother takes in her six-year-old daughter's report cards, cute drawings, school books and certificates. They have all been carefully kept in the six feet by six feet home in a south Mumbai slum.

She takes out each sheet of paper and displays it with a certain satisfaction.

"I want her to go into the fauj (army). I want her to work for the country, that's my wish," says the mother of Tejaswini 'Goli' Chauhan shyly, but determinedly.

"Because she was born on a day no one will forget, when so many died, she should grow up strong."

Goli was born six years ago at the Cama Hospital, near the Chhatrapati Shivaji Terminus on 26/11, even as Pakistani terrorists Ajmal Kasab and Abu Ismail were raining death in the corridors outside.

The simple, earnest, village-raised Viju speaks hopefully about her aspirations for her daughter's future, with tentative but admirable ambition. Her pride is touching. She dares to dream, something that parents of daughters growing up in slums don't often do.

Viju's ambition is special, it ought to be showcased -- this is how you bring up your girl child in India.

Viju, who once worked at the Sassoon Dock in south Mumbai as a casual labourer peeling freshly caught prawns, now works in a home in Cuffe Parade in the vicinity doing 'housekeeping' -- dishwashing and cleaning the floors, and earns Rs 3,000 a month for it.

Dock work paid better, but the kids didn't like their mom coming home smelling of rancid seafood so Viju changed jobs. She also visits homes to do maalish (massage), earning a little extra money when she can.

Husband Shamu, 42 (who has studied till Class 9) works at Sassoon Dock each morning, unloading fishing vessels for Rs 200 to Rs 300 a day. 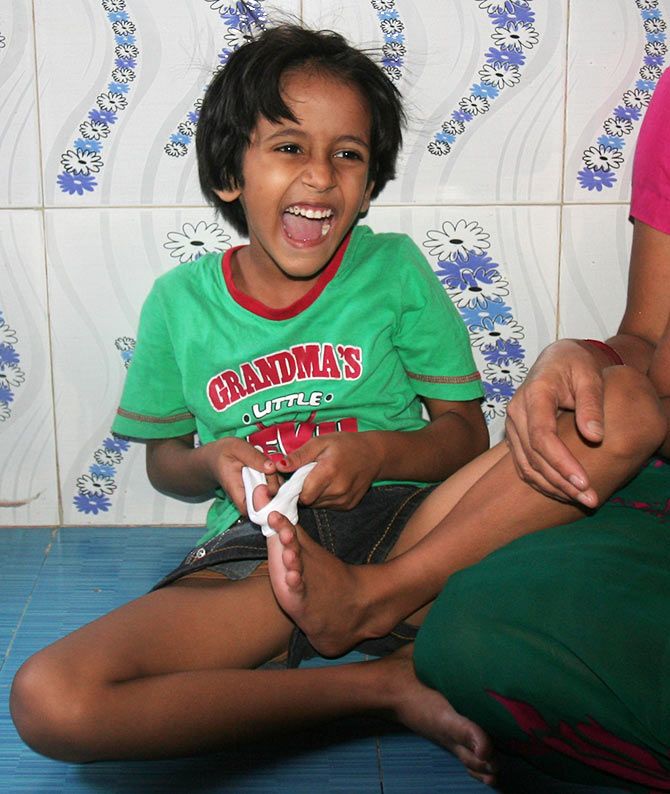 Every last penny of the Chauhans seems to be invested in providing for their children -- Sheshikant, 11, and Goli, 6; the youngest, Jayshree, 4, is not yet in school -- with the best education they can afford.

Rs 800 per month, for each child's fees, because they specifically wanted them to go to English medium, private schools (Sheshikant goes to Bai Kabibai at Bora Bazar, and Goli to Little Flower of Jesus at Marine Lines). Rs 500 each for after-school 5 to 7 pm tuitions, held daily near the Sai Baba Mandir at the start of this slum colony, to make sure their children get their homework done and are abreast with school work. Rs 5,000 was a one-time admission cost, spent this year to get Goli (she's called Golu at home) into school. Rs 3,700 a year for their school bus. Rs 1,100 a year for books.

In spite of the endless publicity Goli has attracted since the day she was born -- she appears year after year on television channels and in newspapers, when the anniversary of the 26/11 attacks is around the corner -- it is surprising that in a city like Mumbai, which has such deep pockets, nobody has come forward to fund this child's education nor has any school offered her a scholarship. One would think a school would be proud to have a little survivor like her on their rosters.

Goli, who I am meeting after five years, has grown up. She is a lively, unafraid, little girl. Bold. But not spoilt; Viju makes sure of that.

She knows she is special because periodically television crews, who Viju calls "news-wallahs", come calling -- like India Television on Wednesday -- up this slum's twisting narrow bylanes to meet her at her dusra maala home (the family lives up a steep ladder in a second storey home) and why articles on her have appeared all over the media. She knows she was born on 26/11.

Adds Viju, "She says 26/11 is my birthday and it was the day the terrorists came." In the neighbourhood itself she goes by several names: Goli, 26/11, Aatankwadi, even Kasab! Rarely Tejaswini. 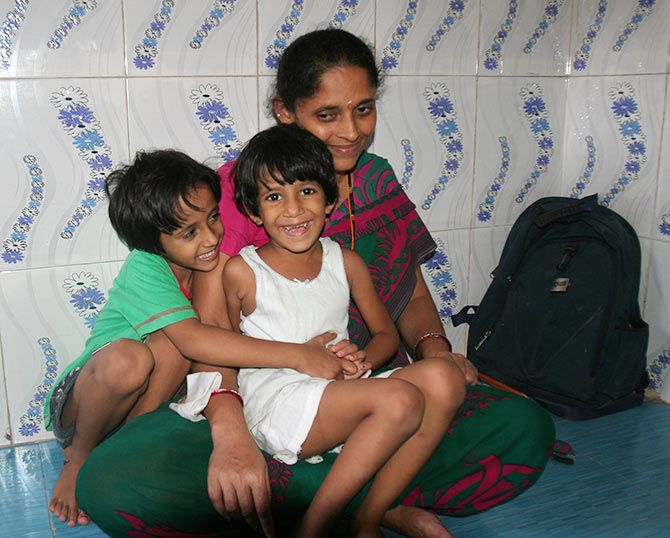 Goli, dressed in a pair of shorts and a T-shirt that says 'Grandmother's little devil', is a bundle of energy, who adores climbing around her little home, swinging from doors and windows, scrambling to the terrace or scaling Viju's neat shelves. She can practically walk on the ceiling, so agile is she -- "I sometimes think I should teach her how to climb mountains," says her mother not entirely joking.

Climbing other kinds of mountains is already what Viju is helping Goli do.

The little girl, who is in Class 1 and loves going to school, speaks some English, Marathi, Hindi and Banjara, her parents's dialect (Viju and Shamu hail from Alipur Tanda in central Karnataka and belong to the nomadic Banjara community, who in that area, she says "sudhar gaya (have mended)" because they no longer move from place to place with their cattle herds). Goli can recite poetry, sing songs (including the national anthem for you), rhymes (Johnny, Johnny Yes Papa...) and loves to draw.

"She's feeling shy today. But she can speak Hindi, she can speak English. She was asking me this morning for a 'notepaid' over and over again. I didn't know what she was saying so I told her to ask Sheshikant. I asked Sheshikant what it was and he told me it was notepad," says Viju proudly, encouraging Goli to talk or recite a poem.

Since the parents are not fully literate, Sheshikant and Goli read all the school notices and tell their parents what needs to be done for their education.

Maggi Noodles is Goli's favourite food. Although she says her mom makes good dal. Viju sends her to school every morning at 6.15 with a tiffin of Maggi, omelet-pav or jam-pav. "She loves those Rs 15 packets of wafers."

Earlier this year Goli fell out of her home, headlong down the narrow ladder and hitting her head rather badly. Viju and Shamu rushed her to St George's, the closest government hospital, where she was treated and discharged. She started vomiting, so Viju insisted they take her to the JJ Hospital, another government hospital in south central Mumbai, to do an MRI scan. Fortunately, everything was just fine and there was no internal head injury.

The Chauhans's home is tiny, but sparklingly clean. The floor is so shiny you could eat dinner off it. Viju seems to be a cleanliness freak. And house-proud. The kids, with their bob cuts, are well scrubbed and neatly dressed. There is a little six-inch wide bathing area projecting outside the home where the dishes are washed and baths happen. In a slum like this, little kids cannot use the public lavatories -- a piece of newspaper in the alley does the job. 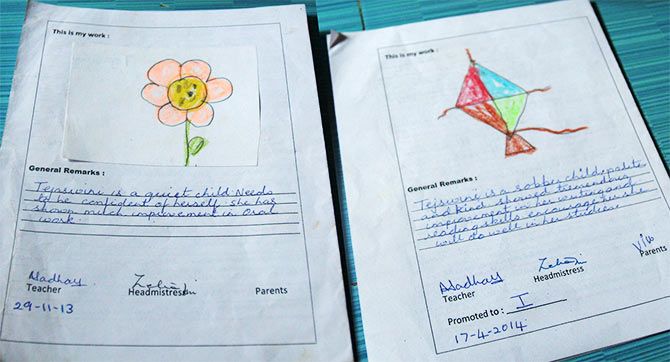 Viju is particular about how Goli spends her time. Money is not wasted on buying toys and dolls since school work is more important. But Viju's no tiger mom. She feels there is enough stuff to do among friends and cousins -- kite-flying, games, roughhousing and toys are not important. And they are allowed to watch cartoons on television -- Dora, in Hindi, is a favourite.

Some years the local Shiv Sena shakha invites them to the ceremony at Colaba market, near Nariman House. Goli has the honour of garlanding a photograph of one of the 26/11 martyrs and light a candle.

This year she only blew her own candles.

If you would like to financially help Goli Chauhan please e-mail newsdesk@rediff.co.in with the subject line Assistance to Goli. Her father, Shamu Chauhan, can be contacted on +91-9867288562 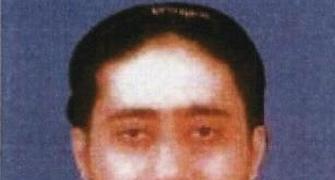 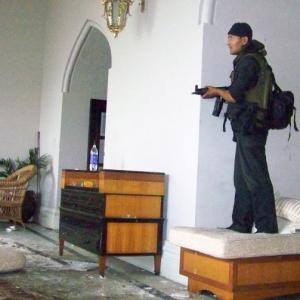