News
Business
Movies
Sports
Cricket
Get Ahead
Money Tips
Shopping
Sign in  |  Create a Rediffmail account
Rediff.com  » News » 'I have been hit!' These warriors continue to be saluted with pride.

One such hero is Air Commodore Jawahar Lal Bhargava, fighter pilot and a 1971 War Veteran.

Bhargava was then posted with the 225 Squadron, flying the indigenous HF 24, Marut. During his very first sortie over enemy territory, his aircraft was shot at and badly damaged.

His only choice was to eject.

Captured by Pakistan, he spent almost a year in their jails as a prisoner of war.

He was returned to India on December 1, 1972, and resumed what would be an illustrious 32-year long career.

At 80, he displays an elephantine memory from which he pulls out gripping tales from the 1965 and 1971 wars with Pakistan as IAF Veteran Air Commodore Nitin Sathe listens in.

Being unwell and not available for flying for the first two days, Flying Officer Jawahar Lal Bhargava was now keen to get into the middle of things. He found himself included in a morning mission.

"It was a two aircraft strike mission into the Naya Chor area (in Sindh, Pakistan) with my flight commander, Squadron Leader K K 'Joe' Bakshi, as my leader.

"Right from the time we took off, I realised that my radio wasn't working too well and I could hear Joe and the ATC intermittently. I informed my leader about the problem and he asked me to continue along with him."

At short ranges, radio reception with his leader was alright, but receiving ATC and ground transmissions was difficult. This was to prove costly later.

Whilst heading out towards the border, the forward air controller (Flight Lieutenant Mulla Feroze) had given out the latest information on the Forward Line of Own Troops.

"Apparently, our troops had moved almost 15 km further west into Pakistani territory. Due to the garbled radio transmission, I didn't monitor this all-important information. If I had, I would have been able to walk towards them and been rescued after the crash. But this was not to be," the veteran remembers. IMAGE: Bhargava Sir on the wing of the F86F Sabre at the Nellis Air Force Base, USA, July 1964.

As the aircraft came over the target area, a large volume of anti-aircraft fire awaited them.

In Bhargava Sir's words, "We were at low level over enemy territory, flying at approximately 200 feet above ground at about 900 kmph. Our targets were installations on the airfield at Naya Chor and other targets of opportunity like military trains, tanks and army concentrations.

"We were fully laden with drop tanks (extra fuel tanks under wing for added range), rockets and guns. We found nothing much in Naya Chor, but, around the airfield, we spotted some army formations whom we targeted with rockets.

"I was engrossed in getting into the second attack when the first hydraulic failure audio warning came on. The aircraft suddenly turned right and went into manual flying mode."

'Ok,' responded a calm Bakshi. 'Continue turning right and head towards the border.' Bhargava Sir remembers the sequence of events that happened thereafter as if it happened yesterday.

"Everything now happened in a flash. In the turn, I realised that I could not spot my leader and gave him a call only to realise that my radio had failed.

"Turning east, I saw my left engine RPM winding down and I immediately tried to relight (restart) it, but to no avail."

The aircraft was heavy with the drop tanks and could barely sustain flight on a single engine which was also threatening to quit; its parameters were going out of limits. He decided to jettison his drop tanks to make the aircraft lighter.

"I had now descended to almost dune height. As I passed a mosque, I realised how low my airspeed was. Looking inside, I saw that my Air Speed Indicator had also given up!"

Whilst dealing with the various emergencies that kept cropping up, Bhargava Sir realised that his aircraft would soon stall and become out of control. He decided to eject.

"I pulled the standby ejection handle between my legs and nothing happened. If I didn't eject now, I would have to go down with my sick aircraft!"

Trying to control the aircraft with one hand on the control stick, he tried the main ejection handle located above his head.

Thankfully, this time, the ejection system worked and he was out of the aircraft with a whoosh and a flash whilst his machine met its end on the waiting dunes.

His parachute had barely opened as Bhargava Sir landed on the soft sand of the desert right next to his aircraft.

The airplane lay half-buried, burning, with the rockets and ammunition inside the pods exploding every few seconds.

"I was more afraid of the locals lynching me than the shrapnel from the rockets injuring me!"

"I stayed near the burning mass of metal and fuel for the next few hours, deciding my next course of action.

"I first decided to bury my parachute and took stock of what was available in my survival pack.

"Keeping my helmet on for protection, I rummaged through the survival pack for a few important things that would help me to subsist on my own during my walk home under hostile conditions." Squadron Leader Bakshi kept orbiting over the crash site for a while to look for the downed pilot. He had smoke coming out of his own aircraft and things did not look too good for him too.

"I waved to him and hoped that he saw me and would soon send a rescue helicopter to pick me up," says Bhargava Sir.

In reality, Bakshi hadn't seen his young Number 2 and thought that he had gone down with the machine.

Returning to base, he informed the base commander, 'I don't think 'Brother' Bhargava has made it!' (Why he is still called 'Brother' is a long story for another day.)

"I saw my leader exiting the area after a while and kept praying he would return safely to base."

After looking the contents of the survival pack, Bhargava Sir realised it didn't contain an emergency map.

"The only map had gone down with the aircraft. I looked around the crash site to see if it had survived, but had no luck there.

"I was therefore forced to work out my position on ground by recalling the map I had studied before the sortie. In my estimation, I was north of the railway line and going east was the fastest route to the border."

The compass in the survival pack was a great morale booster. It would help Bhargava Sir head east in the direction of safety.

An incident that happened soon after spelt his doom and led to his subsequent capture. 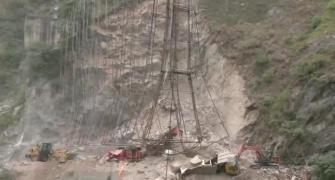 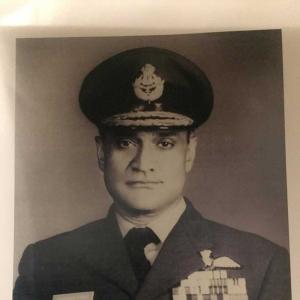