A journey to West, via God!

Carrying colourful toy aero-planes as holy offering, scores of aspiring migrants to the West, flock daily to a gurdwara at the end of a winding, dusty village road in Punjab, confident that their wishes would soon be fulfilled.

Once at the Sant Baba Nihal Singh Gurdwara or Sikh temple in Talhan village near Jalandhar they queue patiently to climb to the inner sanctum on the first floor, where scores of equally decorative model aero-planes lie in neat rows, each a poignant tale of supplication or fruition.

They reverentially place their rainbow-coloured aircraft inside the demarcated enclosure and touching their forehead to the floor in obeisance pray to the Sikh Guru's and Baba Nihal Singh -- a simple farmer from the predominantly agricultural adjoining Doaba region after whom the century-old temple is named -- to send them abroad speedily.

"I have just put in my application for a visa to go to the UK and am here to ensure my passage by making an offering of an aero-plane," Satwinder Singh, a 21-year old graduate from nearby Kangniwal village, said recently.

It's well known amongst Punjabi youths that coming here and submitting aero-planes will ensure that they go abroad, mostly to the UK and North America sooner than immigration and visa issuing authorities imagine, he declared.

After all, there is a power greater than embassy officials and its here, he smilingly added.

Many others who had successfully migrated come armed with replica's of Boeing 777's and Airbus 300's that ferried them abroad to express gratitude to the Baba who they believe made it all happen.

"My son was trying hard to go to Canada but was denied a visa. A friend suggested we offer the replica of an aeroplane at Talhan gurdwara and it worked and he is now in Toronto," Surinder Kaur from a nearby village said.

Of all 28 Indian provinces, Punjab has possibly the largest number of expatriates, largely Sikhs numbering around three million mostly in the UK, Canada, the US, Western Europe, Australia and New Zealand.

There is hardly any family in the Doaba region that does not have at least one if not more people living in these countries.

In classic immigration patterns Punjabi migrants have over years sponsored either relatives or fellow villagers to join them overseas, resulting in entire neighbourhoods in British, Canadian and US cities reflecting the ambience back home.

Many such émigrés lived out their lives aboard without even learning English or even feeling the need to do so to survive.

"Shrinking land holdings, lack of employment opportunities and increasingly uneconomical farming were responsible for around 300,000 Punjabi's annually migrating from rural to urban areas, triggering a serious and irreparable demographic change in the countryside" Khangura said.

Of this number around half managed somehow to join their relatives abroad considerably augmenting the Punjabi diaspora overseas, he added.

"I take hundreds of toy aero-planes almost daily, sometimes even twice on weekends and holidays down to the temple godown to store them to make room for hundreds of people making their offering" temple worker Shivinder Singh said.

Blind faith in the Baba's powers to vindicate their wishes and send them overseas is overpowering and what motivates them to visit, he added.

Nestling beside the toy aircraft are equally resplendent models of busses and trucks proffered by those wanting real ones, hoping to launch their own transportation business, a calling to which entrepreneurial Punjabi's are partial.

Lining the narrow, bustling alleyway leading to the temple are a host of shops selling a glittering variety of traditional offerings, of which toy aircraft were the most prominent.

"It's (toy aero-planes) one of our most popular and hot selling items," shop owner Bahadur Chand said. It obviously works or there would be no repeat sales each day, he added. 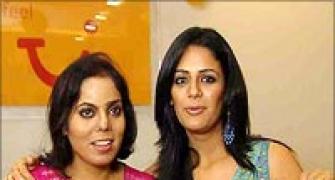 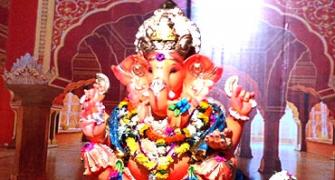 From Goa to UK: Readers' PIX of Ganpati 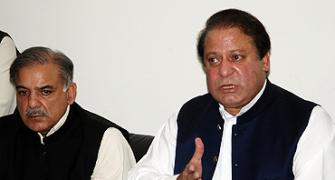