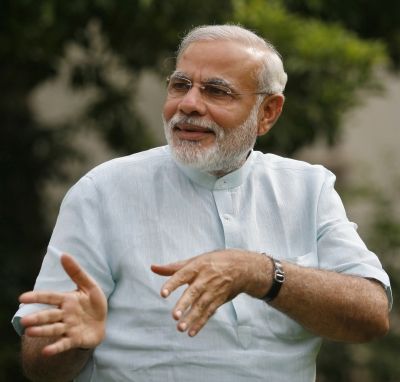 Despite criticism of a lack of transparency and communication from the Modi-led government, BJP leaders point to "good beginnings" on several fronts to defend its performance. Sheela Bhatt/Rediff.com reports. The first of a two-part series.

Prime Minister Narendra Modi's critics await his speech on the morning of August 15 to see if the icon of Election 2014 shows the same spark that he demonstrated during his high-voltage election campaign. So far, Modi has been attempting, through the Prime Minister's Office, to superimpose the Gujarat model of governance onto the well-established New Delhi system. That is not likely to work, even his one-time staunch supporters feel.

Media watchers say the government lacks transparency and this will snowball into serious issues down the line. Many parliamentarians feel that even the balance between the Executive and the Judiciary is likely to be shaken sooner rather than later.

Industry seems confused by the emerging Modi brand of governance as the expected economic reforms are not in sight. 'Whichever way I look at it, I don't think any big subsidy reform is intended,' Dr Debroy posted on his blog.

Dr Bhalla, in his column in The Indian Express, asked, 'Who would have believed at the time of voting that Modi would fail to communicate his thoughts, his ideas of reform, his vision for a new India -- a problem also seen with the previous government? We saw and heard him here, there, and everywhere -- today, direct communication is nowhere to be heard.'

Of all the criticisms of the Modi-led sarkar, the gravest is about the Bharatiya Janata Party's political manoeuvring, under the eyes of newly-nominated BJP President Amit Shah, in Uttar Pradesh.

'Will the real Modi please stand up?' Dr Bhalla asked.

It is expected that the 'real Modi' will open up from the ramparts of the Red Fort on Independence Day.

However, that hope may not realised. After all, the speech from the Red Fort has to be political and for the 'historical records'. Modi's voters are looking for good governance on the ground, control of prices, corruption-less implementation of some creative ideas to govern the country and a swift mechanism to deliver justice.

In view of the obstacles the government faced in getting the insurance bill through Parliament suggests that even with the BJP's 281 MPs, everything can't be taken for granted in a parliamentary democracy by the ruling party.

One of Modi's confidantes and an important BJP functionary, in an off the record conversation, gave a long list of things that the Modi government has already done and is doing.

Here are a few defensive arguments that BJP leaders offer while speaking to Rediff.com:

ONE: Out of all the issues the most serious issue is related to rising communal tension and clashes in UP and Maharashtra. One of the reports that analysed the communal incidents said that, 'Between May 16 -- when UP delivered a spectacular tally to the BJP in the Lok Sabha -- and July 25, 605 low-key clashes took place which police identified as "communal" in nature. Nearly 200 of these occurred in or around the 12 constituencies (where by-elections will be held soon) and another 200 in the broader region.'

"The report says that the 605 clashes are identified by the Uttar Pradesh police as 'communal in nature'," the Modi condfidante said. "Do you know how and by what standard operating procedures any crime is identified as 'communal'?"

"Even when a Muslim boy snatches a purse of a woman in the bazaar it will be termed as 'communal' if the victim is a Hindu. Since 1947, the procedure is set, particularly in UP, where the IPC (Indian Penal Code) Section 153A is defined and applied arbitrarily by the police if it suits the political masters."

These sections are such and applied in such a manner that merely by reading "statistics" of communal tension the actual seriousness of the ground situation can't be judged, argues the BJP leader.

Instead of talking about the BJP's role in the UP communal fire, the BJP leader said, "If, really, Hindus and Muslims have had clashes in 600 instances in the limited area of UP then the entire nation should be shaken up. The report has analysed 'statistics' and not the ground situation. How many television channels and dailies have reported in-depth the communal riots and clashes all over UP as mentioned by the Congress? If 600 clashes are actually reported by the police, then why is the media not showing them round the clock?"

BJP leaders in UP do not deny communal tensions in general, he said. But he said that is due to the Samajwadi Party's undeclared policy of deputing only Yadavs and Muslims in the police stations of communally-sensitive areas.

TWO: Those who miss the important pointer of Modi's thinking are reminded proudly by the BJP leader that the Modi government has taken the decision on the Bali agreement on the World Trade Organisation after much deliberation. The top five leaders in the government including Modi met to discuss it.

The BJP has no doubt that the Manmohan Singh government could not take their argument to its logical conclusion. They insist, in December 2013, then commerce minister Anand Sharma succumbed to international pressure. Sharma has strongly rebutted the allegation.

On the minimum support price of rice, India has crossed the subsidy limit and if it had not walked out from the WTO talks, Indian rice farmers would have been rendered without any protection.

"We would have seen 5 lakh (500,000) farmer suicides in the coming decade if India would have not taken the strong stand at the WTO," the senior leader told Rediff.com "Even US Secretary of State John Kerry came calling to see that we join the chorus, but Modi stood by Indian farmers. What more do you expect from the government in the first two months?"

When told about criticism that Modi is facing from his intellectual supporters, the BJP leader said, "Those who has given us votes have to be protected. Only the election after five years would prove if we are on the right track!"

"We will prove, eventually, we are neither capitalists nor under the influence of the corporatewallahs. We are realists!"

THREE: The Modi government's top functionaries argue that by October they will ensure that food prices are brought under control. So far, all its leaders including ministers like Arun Jaitley and Rajnath Singh have shown sensitivity to price rise and keeping inflation in check, the BJP leader claims.

FOURTH: In the Budget, he points out, in spite of pressure of top bureaucrats, Modi and Jaitley did not raise any taxes.

FIFTH: To show sensitivity to the poor and to ensure continuity and exhibit maturity in governance, none of the welfare schemes initiated by the Manmohan Singh government have been discontinued.

SIXTH: The Modi government has ensured that SAARC countries feel closer to India. New confidence building measures are planned in this regard.

SEVENTH: Indian industrialists are given confidence to invest in new horizons of growth. Serious attention is being given to remove bottlenecks. The Indian Railways has been asked to resume building of 230 over-bridges to help expedite goods transport.

EIGHTH: The BRICS summit has shown that India cannot be underestimated. India is not a passive player after the stand on the Bali trade issue and BRICS Summit.

NINE: Modi is directly handling issues related to the Indian military and its modernisation. One rank, one pension is under implementation. The military projects related to security get the highest priority. Military projects that need one hectare or less land are exempted from environment clearances.

TEN: "Why is the media not writing that we have not abused the CBI Central Bureau of Investigation) to pass the insurance bill or manoeuvre things in the Rajya Sabha?" the BJP leader asked.

All the BJP ministers, except the top four (Modi, Jaitley, Rajnath Singh and Sushma Swaraj), are asked to attend the open darbar at the BJP headquarters on Ashoka Road, he said. They have been told, 'These people (party workers) helped you get votes, now listen to their issues and help solve them.'

Part II: 'Modi wants to be Patel, but might end up as Indira'