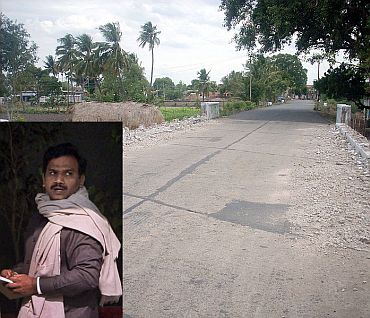 Having traversed through the DMK bastion of Thiruvarur and the AIADMK stronghold of Srirangam, Saisuresh Sivaswamy concludes his poll journey in Peramabalur -- the hometown of jailed former telecom minister A Raja -- which slowly seems like slipping out of the DMK's hands.

Getting through to the Dravida Munnetra Kazhagam in this assembly election has been difficult throughout. And, you know as you approach the local, plush election office of the DMK, that it will only get tougher.

The reasons are the same in all the three constituencies I have visited. The party feels that the media has "betrayed" it with its campaign against the 2G spectrum scandal.

And in central character Andimuthu Raja's hometown of Perambalur (which falls under Perambalur LS constituency, his original one before de-reservation made him move to Nilgiris), there's an added grouse: that a popular Dalit leader has been brought down (chumma kavutthuteengale sir) unfairly.

Raja may be awaiting his fate in Tihar jail, but he features in the campaigns of both sides. As a great leader, or as the root cause of all evil, depending on who you listen to.

'Why have you come to this constituency among the 234?' The first round of clearance ensures that you are not an Election Commission official in disguise. The next involves more focussed questions, about one's job, employer, political views etc.

"Why have you come to this constituency among the 234?" The reason is A Raja, who is the constituency's face regardless of who is contesting the elections, you offer.

"Face mattum ille sir, base kooda (not just the constituency's face, but also the base)," a young blood pipes in sullenly.

A senior party worker adds, despite being chided not to give out too much to the media: "You have understood the importance of this constituency, sir, wish our people also did."

There is a sense of resignation in the DMK 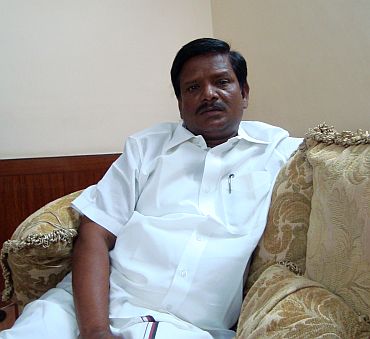 And the message drives home, that the DMK -- at least the cadres, if not its key people -- is reconciled to Perambalur slipping out of its hands. There is a sense of resignation around that no words can convey; one needs to be there to feel it.

The signs are all there.

Sitting Member of the Legislative Assembly Rajkumar, a Raja protege and a relative, says he has been denied a re-nomination. In his place is a new entrant to the party, M Prabhakaran. And see, no top DMK leader has come canvassing in the constituency, taunts the opposing All India Anna DMK.

In an interview, Rajkumar admits that it hurt initially when he was kept out of the fray but now he is in the thick of the campaign "because that's what Raja sir will have wanted."

'You should see the crowd response' 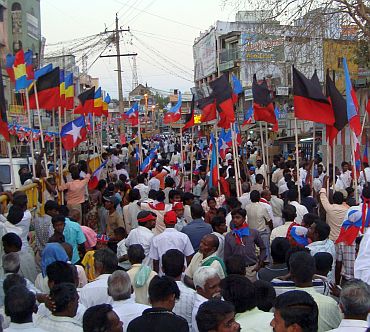 The people of Perambalur are solidly behind Raja and the DMK, he asserts, the opposition's "negative campaign" on corruption has had no impact, and that the constituency will remain with the DMK.

"You should see the crowd response to the pudhu vetpaalar (new candidate)," a worker tells me when asked if one can witness the canvassing from up close.

But alas, logistics comes in the way. Prabhakaran is some 40-50 km away on a campaign, and by the time the car reaches there one of two things will have happened: he will have moved on to another spot, so it becomes an endless round of catch-me-if-you-can (of which one has frankly had enough these last couple of days), or he will have retired for post-lunch siesta, leaving you hanging with assorted, well, hangers-on.

It's no different trying to meet the AIADMK's Tamilselvam. So the road to Velur, tarred and in excellent condition, is the sole route available.

Raja's largesse can be seen in his native village 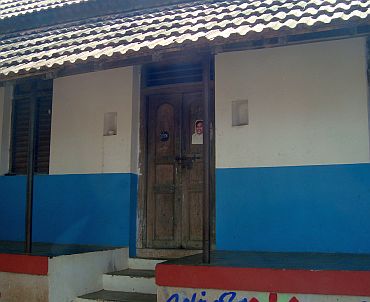 Raja's largesse can be seen in his native village in the form of projects undertaken by the Andimuthu Chinnapillai charitable trust, set up in his father's memory. The villagers know by sight that his home is where you are headed to, and offer the information that it is locked and no one lives there.

From the outside it's a decent looking house, compared to the Dalit habitats around. Could the bigger mansion opposite it be his friend Sadiq Batcha's, you wonder, but no one knows or will tell.

"He has kept his own people poor while making crores for himself and his party," the reference here being to the 2G spectrum scam in which Raja is prime accused.

'I have not seen such a response from the people before' 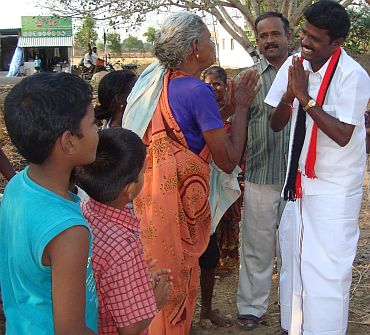 The AIADMK leader says their campaign to the people is direct, don't elect corrupt people, and the latter have been responding positively because they are "just fed up".

"I have not seen such a response from the people before. It is as if they have suddenly woken up. When we go canvassing we don't have to say anything, they indicate to us that yes, their minds are made up."

Tamilselvam, the AIADMK's man of the moment, is a simple chap. He was born into a poor family that struggled to make ends meet, managed to finish his masters in arts, got involved in student politics, and has been with the party for long -- and the nomination is "Jaya amma's reward".

'Mannin maindan, ungalin oruvan, gudisaiyil pirandhavar (son of the soil, one of you, born in a thatched hut)' are some of the epithets flowing freely from the propaganda van as the candidate set out on Thursday to Raja's constituency in a show of strength.

Tamilselvam is a simple chap, but so was Raja once 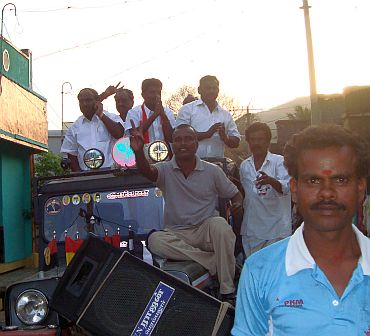 This is also the first time one gets to hear specially produced campaign songs, not the usual filmi ones. The AIADMK's audio CD, titled Paasamulla ungalin sogadhari (your fond sister), a reference to Jayalalithaa, has one song sung by SP Balasubramaniam, a couple by Swarnamukhi, and a few others. Lyrics are by Pulamaipitthan, and music by Deva.

The music is catchy, and includes songs like Oru latchathu ezhubathi aayiram kodi (one lakh seventy six thousand crores), Oozhalukku naan neruppu (I will burn corruption). Catchy ones, and the crowd is atwitter.

Tamilselvam is a simple chap, no doubt, but you cannot help thinking back that once, Raja too must have been simple.

Somewhere, as power seeps in, one forgets one's roots, the cause, and the people one has pledged to serve. From servant the transition to master is complete.

Will Tamilselvam go the Raja way, too? 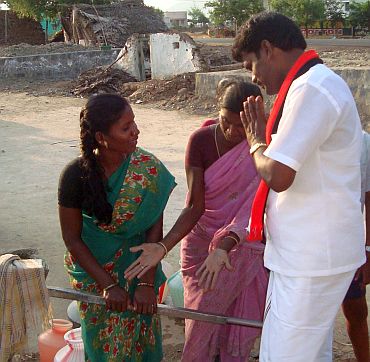 Will Tamilselvam go the Raja way, too? Questions to the candidate, however, are futile.

He is more interested in parroting his campaign lines to you, and less in listening to what you have to say.

Does he remember the words of Arignar Anna whose principles his party has sworn to uphold? Naturally there is a mismatch between the questions and answers.

And, as you heave behind his festive election campaign to Velur, the thought haunts you.

Are Perambalur, Tamil Nadu, and India destined to forever see a repeated replay of ambition and greed overpowering simple people?