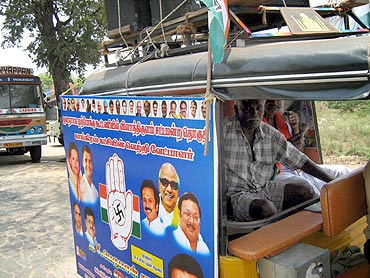 Image: A autorickshaw campaigns for Congress in Ettayapuram
Photographs: A Ganesh Nadar

Tamil Nadu's political parties may be regretting their earlier tactics of bribing voters and buying votes. A Ganesh Nadar finds out why

As the days get hotter in Tamil Nadu with the advent of summer, the temperature on the ground has been escalating thanks to the campaigning for the forthcoming assembly elections.

Since the Election Commission has banned flags, banners and scribbling poll graffiti, candidates have no choice but to opt for door-to-door canvassing.

A few autorickshaws and jeeps, adorned with party flags and posters, play recorded CDs which try to woo the voters.

A central government employee in Tuticorin, on condition of anonymity, said, "I want (ruling Dravida Munnettra Kazhagam president and Chief Minister) Karunanidhi to form the government again. At least there will be stability and continuity. With (All India Anna Dravida Munnetra Kazhagam chief) Jayalalithaa you never know what will happen next. She changes her mind very whimsically."

He cites the AIADMK chief's recent parting of ways with Marumalarchi Dravida Munnetra Kazhagam chief Vaiko as an example.

"He supported her in everything she said or did without a word of protest. She showed him the door without thinking about what he has done over the years. What chance does (Desiya Murpokku Dravida Kazhagam chief) Vijayakanth have with her? He might be thrown out of the alliance after the elections. Also see the way he talks in public. Every day he comes up with new statements. He too is wavering".

The AIADMK will win in Ettayapuram, says Prabhu, a resident of the town in Tuticorin district.

He said, "Here the AIADMK will win. They have given this seat to their Left Front allies. The Left Front is strong here as they have done a lot of work in organising farm labourers. They will lose some votes because of Vaiko leaving them."

The MDMK walked out of the AIADMK-led alliance after the party failed to get the number of seats it wanted.

'People are not aware of the 2G scam' 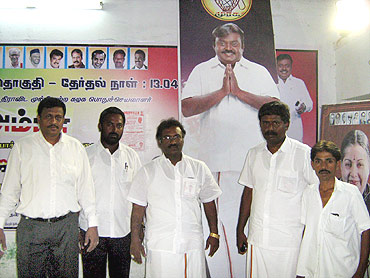 Union Minister of Shipping G K Vasan campaigned in Ettayapuram recently and a small crowd turned up to listen to him, said an onlooker.

Sivakasi in Virudhunagar district, known across India for its firecracker industry, also seems to favour the AIADMK. According to the owner of a local printing press, the frequent power cuts are the reason behind the locals rooting for the opposition party.

"We need power to run the presses. We have two-hour power cuts everyday that we are told in advance about. Unannounced power cuts happen at any time. This irritates not only the owners but also the workers in this town," he said.

Interestingly, though the AIADMK has been going to town about the 2G scam, allegedly perpetrated by DMK leader and former telecom minister A Raja, no one here mentioned the issue.

The auto drivers in this town also support the AIADMK as inflation under the DMK's rule has made it impossible to make ends meet, they say.

A coconut seller here said he always voted for the AIADMK's election symbol of two leaves as party founder M G Ramachandran had given the symbol for the party.

"This time, they will not be able to distribute money as the Election Commission is very strict. But even if anyone gives me money, I will still vote for the AIADMK," he said.

Virudhunagar, which is dotted with oil mills and other industries, will witness a face-off between DMK ally Congress and AIADMK ally DMDK.

DMDK candidate K Pandiarajan, a social worker, had also contested Lok Sabha election in 2009. He is well known for his altruistic activities in the area.

N D Raja, DMDK's district secretary in Virudhunagar, said, "We have one team for every village which is alert all the time. Their job is to make sure that no one distributes money during the run-up to the elections. If they notice anything amiss, they will call us and we will inform the Election Commission immediately".

Sudhakar is a local DMK leader and a district panchayat councillor in Virudhunagar. "We are going door-to-door to campaign for the Congress candidate here. We are telling people what we have done in the last five years. We will easily win," he said.

Deputy Chief Minister M K Stalin has campaigned in the area, while his brother and Union Minister for Fertilisers M K Alagiri has visited Virudhunagar and met the local leaders, but desisted from campaigning.

According to another DMK worker, inflation will not affect the party's vote share because the salaries had also risen correspondingly, but admitted that power cuts will be an issue.

"People are not aware of the 2G scam here. No one knows what it means," he declared. 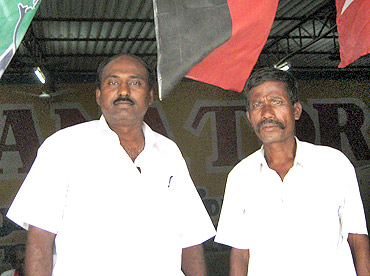 Thirumangalam, 20 kms south of Madurai, made headlines in 2009 due to the rampant bribing of voters for the by-polls by both parties in the fray. For the forthcoming polls, the DMK and the AIADMK are again fighting against each other.

But the situation is different. Ravi, a food stall owner, says, "We want change. We are tired of all the power cuts. A town bus to Madurai costs us Rs 3.50 but it runs only twice a day. The luxury buses cost us Rs 11 which is too expensive".

According to Ravi, only party workers had received that money so far. The Election Commission's strictures were hampering the parties' attempts to bribe the voters.

"Even if they give Rs 200, no one will vote for them. They (the voters) are feeling cheated because last time they got so much money," said Ravi.

A local merchant opined that distributing money during the last elections was a bad idea. Due to the Election Commission's crackdown, parties were unable to distribute money and this was bound to hit their vote share.

"People won't come out to vote because they are waiting for the money, which will not come. I have heard that in these elections, they are going to give only Rs 200 or Rs 300, which is a pittance compared to the amount given last time. They will lose votes by doing this. It will be better if they don't give any money at all," he said.

Incidentally, the Bahujan Samaj Party led by Mayawati has also fielded a candidate in Virudhnagar.