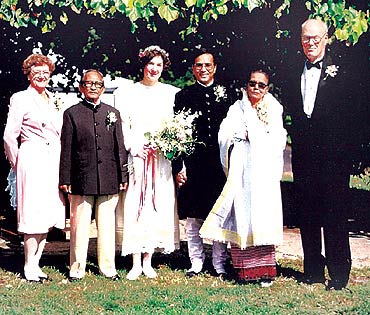 Image: Nancy Yambem as a bride with husband Jupiter and their families

Jupiter Yambem met world leaders and business tycoons while working at the Windows on the World restaurant at the World Trade Centre, but he always remained connected to India. On the tenth anniversary of the 9/11 attacks, his wife remembers her husband and the painful journey after his loss. Arthur J Pais reports

Jupiter Yambem, the banquet manager of one of New York's best restaurants Windows on the World located on the 106th floor of the North Tower, was one of the 164 people present in the abuzz eatery on the sunny morning of September 11, 2001 when a plane crashed into the World Trade Centre.

He was survived by his wife Nancy of ten years and five-year-old son Santi.

Yambem was born and raised in Uripok Yambem Leikai, Manipur. He was only 21 when he moved to American and started his career as a waiter at the popular restaurant Rainbow Room.

He never gave up his Indian citizenship, his friends say, and this is what fascinated his wife Nancy. She too was drawn towards the Manipuri culture. Today, Nancy is remarried but she still remains connected with Jupiter's Indian roots. Soon, she is going to assume an important position in the tiny North American Manipuri Association.

She also shared Jupiter's love for the environment. As a couple they joined a group dedicated to protecting the Hudson River, and made friends with the activist and folk singer Pete Seeger.

Today, Nancy makes her home in upstate New York with her engineer husband and 15-year-old Santi, who still remembers a smattering of his father's tongue Meitei.

'He always remained Indian at heart' 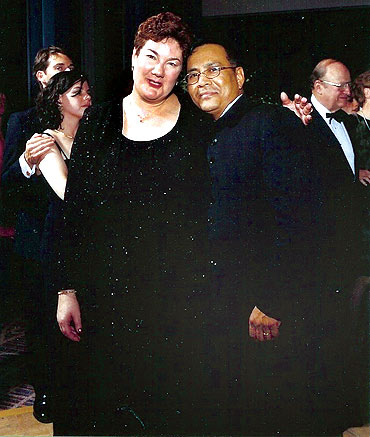 Image: Nancy with her husband Jupiter

Nancy McCardle Yambem on her husband:

I believe his mother named him Jupiter because he was born in a month of some space exploration. None of his brothers have a name like that; they have Manipuri names.

My husband worked as a banquet manager at one of the most exclusive restaurants in the city (in 2000 Windows on the World earned $ 37 million and was rated the highest grossing restaurant in the US) but at heart he always remained (strongly) Indian and steeped in his Manipuri culture. That is the reason I go to Manipur with our son Santi once in two years. I want him to get acquainted to his father's heritage.

I come from Dutch and Irish heritage and my parents took to Jupiter easily -- we had met in college -- even though there was a bit of hesitation in the beginning. But my grandmother was not happy at all. She had difficulty in understanding Jupiter; he was not a regular white guy. But once she got to know Jupiter -- and that took some months -- they became buddies and the two would often trade stories over beer. That was Jupiter. He would make friends with anyone. He was the life of a party.

'My son thought tourists were doing bad things, had to tell him they were terrorists' 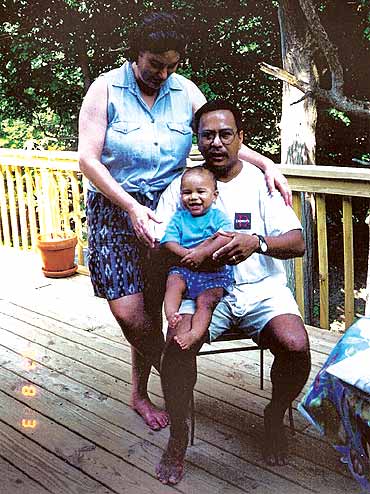 Image: Young Santi with his parents Nancy and Jupiter Yambem

On the other hand, Jupiter's family in India was very welcoming. We visited them before we tied the knot. Their thinking was -- he went to America, he studied in America and he has made a life there, and that this is his choice.

It was very difficult to explain to Santi what had happened to his father. He thought tourists were going around doing bad things. I had to tell him that they were not tourists but terrorists.

One of the difficult things I had to do was to give away some of the most expensive suits Jupiter had in the house. These were important to him, as he met world leaders and business tycoons at work. I donated many of the suits but have kept one or two as relics for Santi.

Jupiter wanted to call our son Chinglailakba or dragon tamer. Not someone who fights dragons, I tell people, but someone who tames them. But I thought we should have a simpler name, and we chose Santi. But Chinglai remained the nickname

I am a Protestant and Santi has been baptised but Jupiter remained a Hindu. As a child Santi attended a lot of traditional Manipuri ceremonies.

I have been learning about Manipuri culture for many years but it has not been easy. There are not many people from Manipur here and the Manipuri culture is quite different from mainstream Indian cultures. As for the ceremonies, I had to learn about them from from Jupiter and from other Indian. But I realised not many people were aware of the traditional rituals. 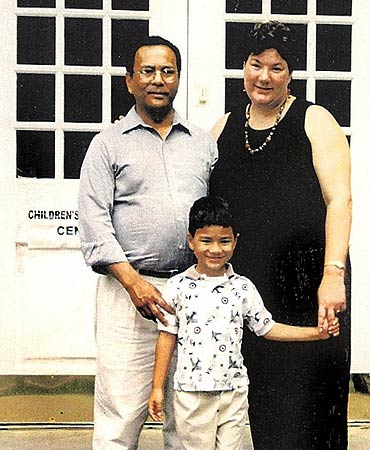 Image: Santi with his parents

When Jupiter passed away, we bid goodbye to him in a traditional Hindu ceremony. We also called a priest who said a few prayers. It was very difficult to arrange a Hindu funeral, but with family members from India and a Hindu priest presiding over the rituals it all went well.

Helping little Santi heal was very important to me. I took him to the Ray of Hope week, which was held at Camp Sunshine, normally a summer retreat for children with serious illnesses and their families. But soon after September 11, they welcomed the bereaved families and we went to the retreat with photographs and memories, and shared them with other children.

Santi had received letters from family friends and family members about Jupe.

Shortly before September 11, Santi would sleep all by himself. But the attacks made him very insecure and he needed me by his side.

Santi's memories of Jupiter are still fresh, but at times he goes into a shell when we discuss his father. The other day I found a video in which Jupiter was teaching four-year-old Santi to count in Manipuri. I said to Santi: 'You must see this.' He said, 'I will.' But I think he does not want to see it. Watching the video could be overwhelming. He has come with me to Ground Zero and he may join me again at the anniversary event. It is still very difficult for him to come to terms with this tremendous loss.

'I don't want my son to ever forget his father' 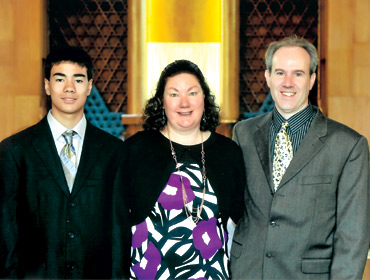 A few years after Jupiter's death, I decided I owed myself a new life. I knew I could take good care of Santi even if I remarried. I began looking for a partner on the Internet. I told myself, enough of a sad face, this is not how Jupiter would like to see me.

It was not easy for Santi to bond with my new husband (Gerard Feldmann) but they bonded after a few months. We do not have children but my husband has a daughter by his first marriage.

I wanted to leave to Santi a (gold) necklace Jupiter had been wearing since his baby days. It was given to him by his mother and he never took it off, even when he went swimming. But we could not find it in the rubble. I searched for the necklace for months. I still hope it will somehow turn up.

'The girls were totally nuts about him'

I miss Jupiter for a number of reasons. We had been friends for many years, and our families have known each other for a very long time. Our grandfathers were the first generation of Western-trained physicians. Our mothers were also friends.

My recollections of him are featured in the just-released book After the Fall: New Yorkers Remember 2001 and the Years That Followed.

I am in America because of Jupiter. I had come here as a visitor and he encouraged me to study. I remember him saying: 'Oh God, it's easy, come on we'll just get you a college admission. Come to New Paltz (Ulster County campus of State University of New York) and study photography there. You don't have to go back (to Manipur).'

Jupiter, who went on to be a manager of Windows of the World restaurant, began working in New York as a waiter in a restaurant. I remember how awesome he looked. The girls were totally nuts about him. He looked up to me as an older brother. I had begun working at the Asia Society and my programme was getting quite a bit of recognition. I think he felt very proud of the coverage I was getting in the mainstream media.

September 11, I got a call from a friend in India who said Jupiter's brother Laba in India was worried and I suddenly remembered Jupiter worked at the Windows at the World. Several friends and Jupiter's wife Nancy spent many hours looking him, but he was gone.

He was one of the first people to be found. It was the fifth day after the attacks.

(Somi Roy is a film curator and festival programmer)