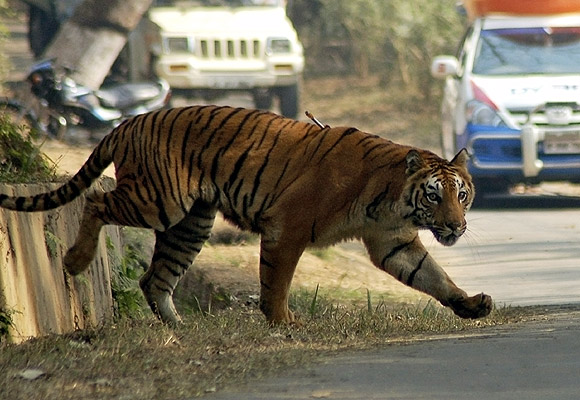 Extending the ban on tourism activities in the core areas of tiger reserves, the Supreme Court on Wednesday pulled up the Centre for the depleting population of the wild cats in the country.

A bench of justices A K Patnaik and Swatanter Kumar put some searching questions to the Centre as it made a fresh plea for the review of the apex court's July 24 order banning tourism in the core areas of tiger reserves.

"You are trying to make up. You have done it (guidelines) after due deliberation. We want to know on what basis you want to do it? What is the data available?

"What are you going to do to save tigers? Earlier it was 13,000, now it has come down to 1,200. You are more worried about the commercial activities," the bench told the Centre's counsel Waseem Ahmed Kadiri.

The apex court made the observation after the Centre made a mention of its affidavits filed in the court for permission to review its earlier guidelines for conservation of tiger.

The apex court earlier on July 24 had imposed an interim ban on tourism in core areas of tiger reserves on the basis of same guidelines. The ban extended on Wednesday would remain in place at least till next hearing on August 29. 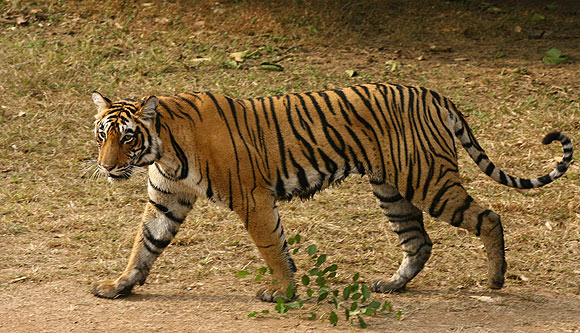 Image: A tigress is seen at the Ranthambhore National Park in the Sawai Madhopur district in Rajasthan
Photographs: Vijay Mathur/Reuters

"What have you done for the tiger project? What about the core areas you have promised to take steps for? The Union of India has not done anything except filling affidavits. Why did you initially recommend the ban?," the court asked the counsel.

The apex court later while ordering that its interim ban order would continue posted the matter for further hearing to August 29.

The Centre had filed an affidavit seeking permission to review the existing guidelines for conservation of tigers in the wake of the apex court's order banning tourism in core areas of tiger reserves.

Tags: The Union of India 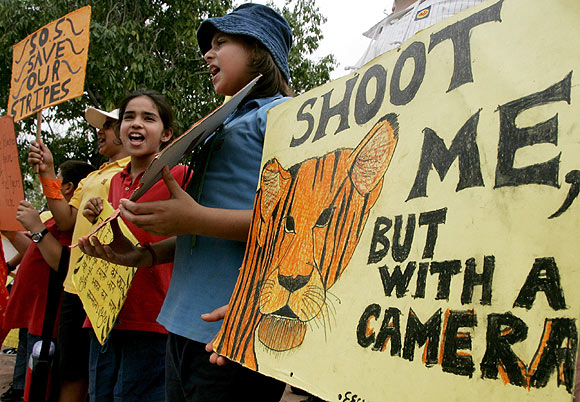 Image: Children shout slogans as they take part in a campaign to save tigers from poaching in New Delhi
Photographs: Kamal Kishore/Reuters

The additional affidavit jointly filed by the National Tiger Conservation Authority and the Ministry of Environment and Forests said the earlier guidelines framed by it on the basis of which the apex court had imposed the interim ban needs to be reviewed.

"The guidelines submitted in the context of ecotourism in and around protected areas require further review based on more consultations with all stakeholders, including the state governments and the representatives of the local, indigenous communities," the Centre had said.

"The respondents may be permitted to further review the guidelines and conduct more consultations with all stakeholders including state governments and representatives of local indigenous communities, besides reviewing the process adopted by states in notifying the buffer areas of tiger reserves," the affidavit had said. 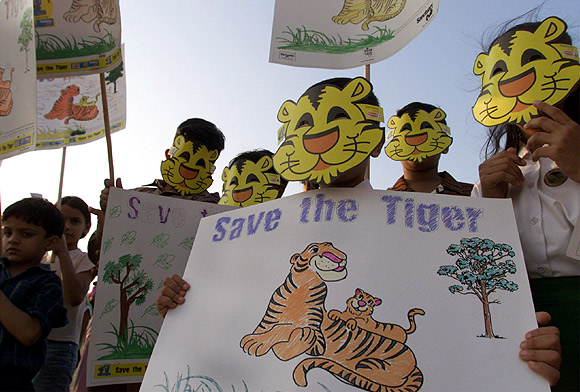 Image: Children hold placards during a human chain as part of the 'Save the Tiger' campaign in Mumbai
Photographs: Arko Datta/Reuters

The buffer zones constitute the fringe areas of tiger reserves up to a distance of 10 km. There are an estimated over 1,700 tigers in the country.

A bench of justices Swatanter Kumar and Ibrahim Kalifulla had earlier warned of initiation of contempt proceedings and imposition of exemplary costs on states, which fail to notify the buffer zones in their respective tiger reserves. 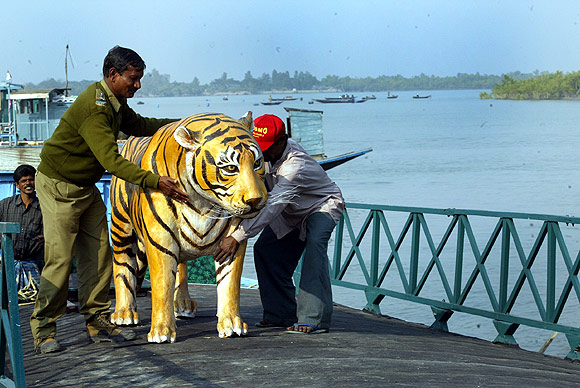 Image: Forest guards hold a model of a tiger at the Sanzekhali tiger reserve in the Sunderbans magrove forest delta
Photographs: Jayanta Shaw/Reuters

The apex court had said despite its earlier directions of April 4 and July 10, several states have failed to notify buffer zones in their respective reserves to regulate commercialisation of revenue land around big cat habitats and help preserve the endangered species.

The apex court had also imposed a cost of Rs 10,000 each on Andhra Pradesh, Arunachal Pradesh, Tamil Nadu, Bihar, Maharashtra and Jharkhand for not complying with its directions.

"We make it clear that till final directions are issued by this court, the core zones or core areas in the tiger reserves will not be used for tourism," the bench had said.

The apex court passed the order while dealing with a public interest litigation filed by conservationist Ajay Dubey demanding ban on commercial tourism activities in core areas of the tiger reserves.