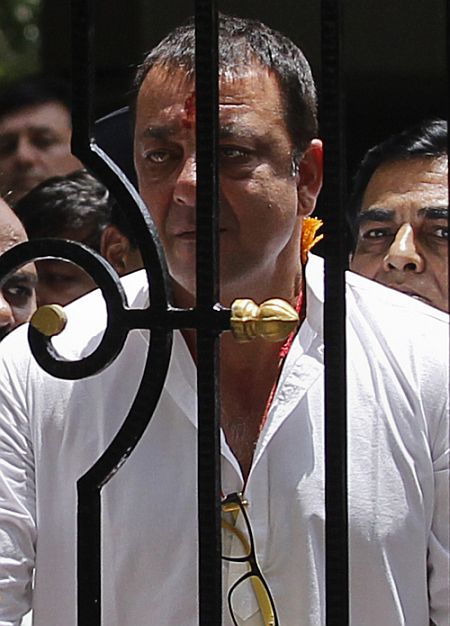 Bollywood actor Sanjay Dutt went back to jail on Thursday night to serve 42 months sentence in the 1993 Bombay blasts case, several hours after he surrendered before a TADA court, abiding by the deadline set by the Supreme Court.

The court allowed the actor access to medicines, home-food, fan and take his mattress and pillow during his stay in the jail.

The 53-year-old actor was also allowed to take with him copies of Bhagwad Gita, Ramayan and Hanuman Chalisa besides his toiletries including toothpaste, shampoo, slippers, kurta, pyjama and mosquito repellants.

However, TADA Judge G A Sanap rejected Dutt's request for an electronic cigarette (Dutt is a chain smoker). Instead, the judge advised him to quit smoking.

Capping another phase in the Bollywood actor's chequered life, Dutt drove to the court in South Mumbai in the afternoon accompanied by his wife Manyata, sister and Congress MP Priya and brother-in-law Owen Roncon.

He was sent to the Arthur Road Central Prison by court after completion of formalities, which took several hours. He may be shifted soon to the Yerwada jail in Pune. 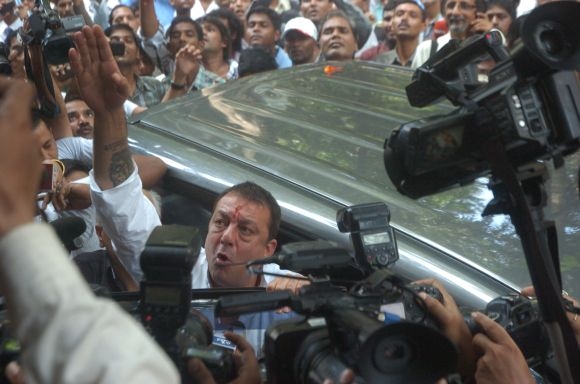 Filmmaker Mahesh Bhatt also came along with the Dutt family in their car but did not come up to the court.

Police kept a tight vigil outside Dutt's residence at Pali Hill in upscale suburban Bandra, where fans in large numbers had gathered since morning, and also in the court premises in the wake of threats to his life.

While Dutt had told the court earlier that he faced threats to his life from fundamental forces, Arthur Road jail in Central Mumbai had received an anonymous letter stating the popular actor would be harmed if he was lodged there.

A large group of people, that also comprised media persons and photographers, surrounded the car in which the actor arrived, not allowing him to get down. Bhatt emerged from the vehicle and appealed to the media with folded hands to move away so that Dutt could go to the court. Finally, the way was cleared. 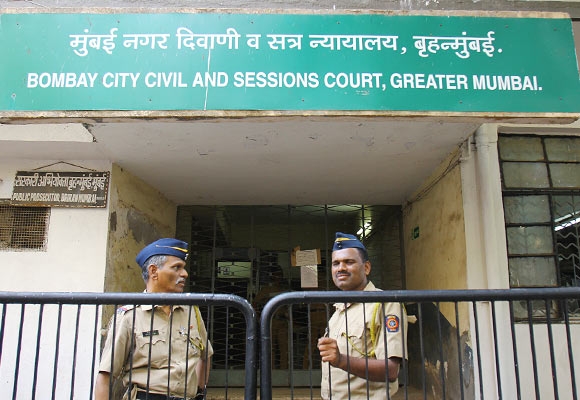 A visibly shaken Dutt, sporting a red 'tikka' on his forehead, entered the court at 2.50 pm with his family members. He was wearing a white crisp `kurta' and blue jeans.

The actor bowed down before the judge who asked him to mention his name, to which he replied "Sanjay Sunil Dutt". He was then asked about the sentence undergone by him (after his arrest in 1993) and he replied promptly "551 days in jail, Sir".

The judge then asked him to go to the dock in the back row of the Court and take his seat. Manyata, Priya and Roncon followed Dutt and sat with him on the same bench. Manyata held Dutt's hand and both seemed to console each other.

Dutt's lawyer also urged the court to allow the visits of the family members on a regular basis. He also requested that the actor may not be given harsh jobs in the prison.

Advocate Merchant later said the actor was planning to file a curative petition in the Supreme Court. 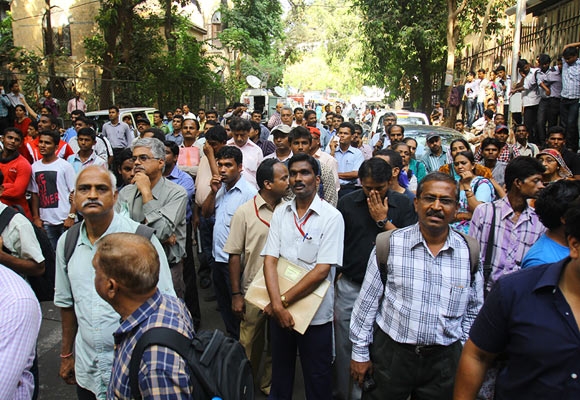 Dutt had earlier urged the special judge to allow him to surrender at Yerwada jail in Pune instead of the court in Mumbai.

However, he withdrew his plea abruptly on Wednesday.

The Supreme Court, on March 21 this year, upheld Dutt's conviction in the 1993 Mumbai serial blasts case. However, the Apex court had reduced to five years the six-year jail term awarded by TADA court, and ruled out release on probation, saying the "nature" of his offence was "serious".

Dutt has already spent 18 months in jail, so he has another three and half years to serve.

The actor was convicted by the TADA court for illegally possessing a 9 mm pistol and an AK-56 rifle, a part of the consignment of weapons and explosives brought to India for coordinated serial blasts that killed 257 people and injured over 700 in March 1993.

The Apex court had on May 14 refused to grant him more time to surrender. On May 10, the Supreme Court had also dismissed Dutt's plea seeking review of its judgment.

On Thursday night, at about 9.45 pm, Dutt stepped into Arthur Road Jail in Central Mumbai where he is likely to spend at least two days, before being possibly shifted to the Pune jail.