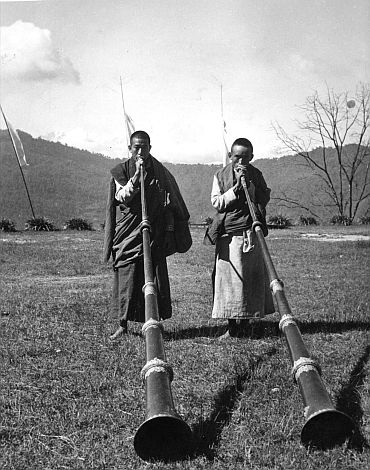 An article in The New York Times recently speculated that Beijing would try to legitimise its hand-selected (and therefore illegitimate) Panchen Lama, Gyaltsen Norbu, by sending him to study in the Labrang Monastery in Xiahe at the somewhat advanced age of 21.

Xiahe is in China's Gansu province, but in the Amdo region of traditional Tibet, which the communists carved up between five Chinese provinces bordering the Tibetan Autonomous Region. Gyaltsen Norbu badly needs the credibility of Labrang Monastery; he was declared the 11th Panchen Lama by Chinese authorities, six months after they arrested the 11-year-old Gedhun Choekyi Nyima, who had been declared the 11th Panchen Lama by the Dalai Lama in Dharamsala, following traditional Tibetan practice.

Most Tibetans believe Gedhun Choekyi Nyima (often called "the youngest political prisoner in the world") is the legitimate 11th Panchen Lama, while Gyaltsen Norbu is disparaged as "the Chinese Panchen Lama".

This typically clumsy Chinese manoeuvre is a mere sideshow to the big story in Tibet, which is a six-month long security lockdown that has gone largely unreported in the world press.

The 17-Point Agreement was India's capitulation more than Tibet's 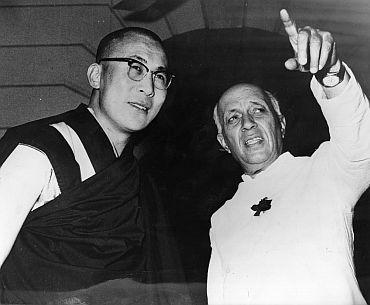 The lockdown, which has involved mass repression of Tibetans and hundreds of preventive arrests, was triggered by Beijing's determination to celebrate the 60th anniversary of the "peaceful liberation of Tibet", which took the form of the 17-Point Agreement (full form: Agreement of the Central People's Government and the Local Government of Tibet on Measures for the Peaceful Liberation of Tibet).

The 17-Point Agreement, through which Lhasa bowed to Beijing's sovereignty on May 23, 1951, was India's capitulation more than Tibet's.

After the People's Liberation Army marched into Tibet in October 1950 and destroyed the Tibetan army, India's army chief, General (later Field Marshall) K M Cariappa declared that India could spare no more than a battalion (800 men) to block the Chinese invasion alongside the Tibetans.

Then New Delhi refused to back Lhasa's request for the United Nations to adopt a resolution against the Communist invasion. With global attention focused on the Korean War, and with India hoping to mediate between China and the United States-led coalition, India feared that sponsoring Tibet's reference to the UN would damage its leverage with China.

And with Washington and London allowing New Delhi to take the lead on this issue (India, after all, was most affected by events in Tibet) China was allowed to subjugate Tibet unopposed.

New Delhi's submissiveness obtained even less for India than it did for Tibet. The first words of the first clause of the 17-Point Agreement ("The Tibetan people shall unite and drive out imperialist aggressive forces from Tibet") directly targeted India.

New Delhi was the "imperialist" force that maintained -- continuing British practice since 1903 -- a military garrison in Gyantse, Tibet, across the Himalayas from Sikkim.

Three years later, India formalised its capitulation to Beijing. The Panchsheel Agreement of 1954, which recognised Chinese sovereignty over Tibet, bound India to withdraw its entire presence from Tibet.

India has clawed back some ground over Tibet blunder 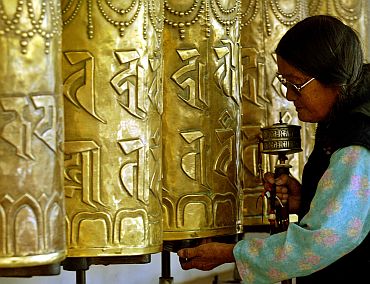 Some of the ground ceded in that diplomatic blunder has been gradually clawed back by India. This began in 1959, when India granted refuge to the Dalai Lama and permitted the setting up of a Tibetan government-in-exile.

Tens of thousands of Tibetan refugees who have trickled in over the years and continue to do so even today have set up a support base for an alternative government to the Beijing-dominated one in Lhasa.

Hundreds of Tibetan monks have been allowed to set up an ecclesiastical ecosystem, central to Tibetan politico-religious belief, which parallels the Tibetan system that they left behind.

In and around Bangalore and Mysore are the mirror images of the mighty monasteries -- Sera, Ganden and Drebung -- that were smashed during China's "democratic reforms" and the Cultural Revolution in the 1960s.

Not least, India retains a core of Tibetan fighting capability in the secretive Establishment 22, manned by Tibetan volunteers who would be more than happy to be unleashed against the Chinese in their homeland. 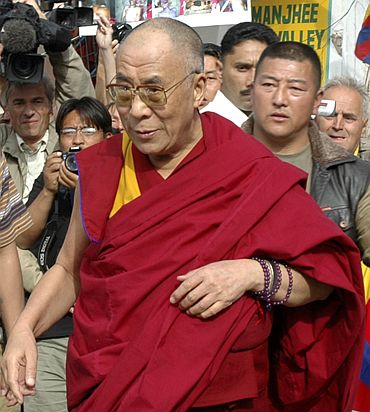 These steps, though, are just enough to annoy China without doing what would be necessary to seriously worry Beijing.

India's reluctance to flash its teeth, and to instead keep reassuring Beijing that the Tibetan exiles are on tight leash, does little to keep alive the sense of hope that Tibetans here need for continuing their fight.

New Delhi's willingness to carry out preventive arrests of Tibetans on the eve of Chinese visits creates apprehension that India can be pressured in the same way as Nepal, which China pressures into brutal police repression of Tibetan exiles.

Nor has Tibet's global icon, the Dalai Lama, struck any strategic notes in his quest for international support.

Brushed off by New Delhi like a distant relative who has stayed too long, and avoided by foreign leaders as a political minefield, His Holiness has been reduced to engagement with second-rung celebrities like Richard Gere and support from dodgy divas like Paris Hilton and Sharon Stone.

His marginalisation has been carefully orchestrated by Beijing, which reacts ferociously whenever any head of government proposes to meet the Dalai Lama.

And when anyone risks Beijing's ire, as President Obama did in meeting the Dalai Lama last month, the conversation always begins with a careful public repudiation of Tibetan independence. Sadly, India, despite all the levers it holds in Tibet, follows that same cautious path.

Dalai Lama's exit will create a major problem for China 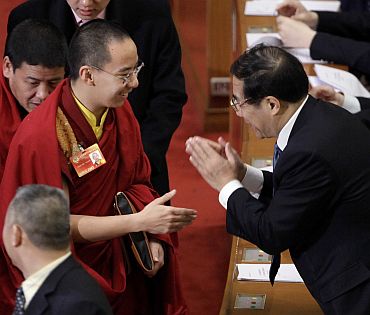 Image: Gyaltsen Norbu, the Panchen Lama, is greeted by a Chinese delegate in at a function in Beijing
Photographs: Jason Lee/Reuters

The hopelessness that has seeped through the Tibetan exile community in India manifests itself in a growing rejection of the Dalai Lama's "Middle Path", which involves a non-violent engagement with Beijing about Tibetan autonomy rather than independence.

India's many angry Tibetan youngsters are held back for now by their enormous respect for the 14th Dalai Lama, but his passing on will create a problem for China that will be far more potent than the legitimacy of the 11th Panchen Lama.

If New Delhi looks ahead and calibrates its response inventively, it may go some way towards recreating the leverage in Tibet that it lost in the 1950s.