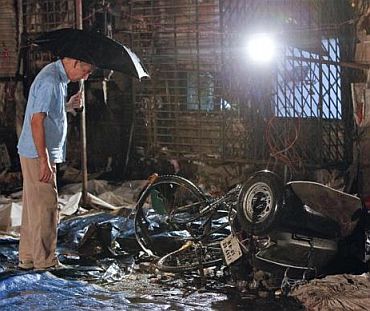 Image: A policeman surveys the aftermath near Opera House in Mumbai
Photographs: Reuters Sahim Salim
The Indian Mujahideen continues to be a mystery for investigators across India. Despite several arrests of its key members, investigators have not been able to put a stop to the growth of the organisation.

The IM is purportedly an Indian offshoot of the Pakistani terrorist group, Lashkar-e-Tayiba, and allegedly largely consists of members of the banned Students Islamic Movement of India.

Though investigating agencies across the country have busted modules of the IM, several sleeper cells, consisting mainly of locals continue to be active.

One city may have several sleeper cells and the IM has cells across India including Delhi, Ahmedabad, Uttar Pradesh, Pune, Mumbai and many southern states like Karnataka, Kerala, etc.

Officers of the special cell, who earlier investigated the IM (allegedly responsible for the serial blasts in Delhi), told rediff.com what direction the investigations into Wednesday's Mumbai blast would possibly take.

Collecting evidence from the site 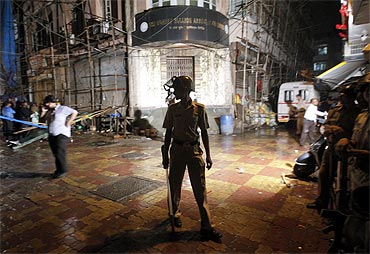 Image: A policeman stands guard at the site of an explosion in Zaveri Bazaar blast site in Mumbai
Photographs: Danish Siddiqui/Reuters

The special cell had, after gathering intelligence and inputs from across the country, gunned down two alleged terrorists belonging to the IM on September 19, 2008 at Batla House in Jamia Nagar.

Highly placed sources in the Special Cell, (the anti-terrorist squad of the Delhi police, said that the first step into any terror investigations is to collect evidence from the site.

"This is the most crucial step. For instance, in Wednesday's Mumbai blasts, traces of ammonium nitrate were found. Timers were used to set off the bombs, which were wrapped in cloth and placed in vessels in a car," a senior police officer said.

"The bombs were timed meticulously to confuse the investigating agencies. This is a classic example of how the IM works," he added.

The collected evidence is sent to forensic labs in Hyderabad and Delhi, where it is analysed. An officer said that different groups have distinct signatures. 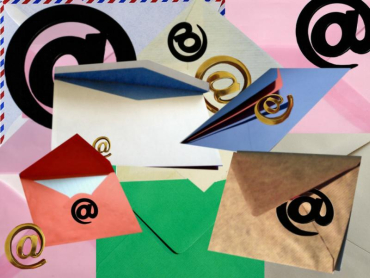 Image: Delhi police had also analysed the terror e-mail sent by the IM after the Delhi blasts

"After the on-site evidence is sent, CCTV footage, if any, is thoroughly and meticulously examined for any kind of clues. Residents in the area are questioned for suspicious movements," he said.

"We establish our sources in the affected areas. These sources, in turn inform us about any further suspicious movement in the area," the officer added.

This can prove beneficial because members of the sleeper cells may come back to survey the area after a blast to assess the damage.

Investigators said that after the Delhi and Mumbai police arrested 22 suspects in September 2008 following the Mehrauli blast, the IM has not been able to regroup, but rather function through smaller modules across the country.

These modules are semi-independent and carry out surveys and logistical operations, providing crucial information about a targetted area: its security presence, crowd, etc. 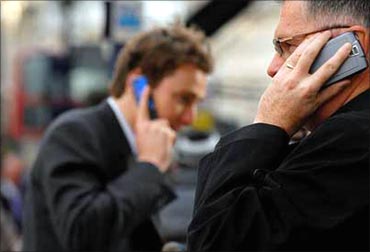 Image: Picture for representation only

The next step is mounting technical surveillance, said the officer. It is determined which phones were used in and around the vicinity of the blasts.

"This is the most painstaking part of the investigation. Several teams of officers are formed, each with their specific responsibilities. One team is marked for surveillance," another officer said.

"For days and weeks, they gather information through surveillance. They mark suspicious phone numbers, and request further details from the respective mobile companies. After this list is prepared, they are further filtered and suspicious numbers are continued to be kept on surveillance," another officer said.

The team also remounts surveillance on numbers, which were earlier under a watch. Several numbers, who the police suspect belong to terrorist groups, are put on surveillance.

While some may lead to arrests, others are constantly monitored for months. Sometimes, even years. Some of these are discontinued after a while.

Coordination between teams across India 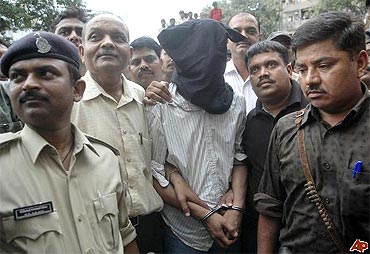 The next step is the coordination between anti-terrorist squads across India. Information is shared between them and crosschecked.

"For the Delhi serial blasts, we had taken information and inputs from our counterparts in Uttar Pradesh, Mumbai and Gujarat. We found that our information matched with their findings. When multiple agencies come to the same conclusion, investigations can become more specific," the officer said.

Delhi police had also analysed the terror e-mail sent by the IM after the Delhi blasts. The Mumbai police, so far, have no such e-mails to analyse.

"That had given us crucial breakthroughs in the case. At that time, the IM was an organisation with several departments. Their media cell also doubled up as a research team," he said.

"The mail they sent was thoroughly researched and had even named specific newspapers which had reported about the Muslim community with 'bias'. The Mumbai police busted this cell with the help of information gathering from the analysis of those e-mails," the officer said.

The final zeroing down 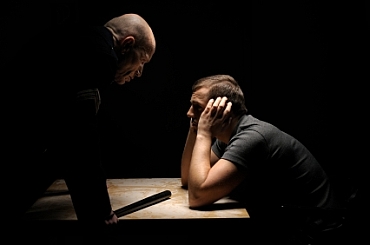 Image: Picture for representation only

When investigations point to specific persons, some of them are picked up for questioning. In some cases, discreet enquiries are conducted about persons through their friends and neighbours.

When the police have enough material, the suspect is picked and questioned. The tactic used in questioning is cross-questioning.

"We repeatedly ask them the same questions in regular intervals to see the conflict in statements. When statements vary regularly, we zero down on that point until either we get a confession or a statement," the officer said.