Rain has NOT washed away evidence at blast sites

Contrary to reports, forensics department sources have confirmed to rediff.com that evidence at Wednesday's blast sites in Mumbai has not been washed away in the heavy rain the city has received in the last 24 hours.

"We have gathered what we needed and are examining it," sources said, adding that traces of ammonium nitrate have been found among other material, which are currently under observation.

According to Professor Chandrashekhar, a well-known forensic expert and recepient of the Padma Bhushan, the team of forensic experts usually cover the area with a plastic sheet to safeguard the evidence apart from taking the help of the police in cordoning off the area.

"Rain cannot be considered to be a deterrent in such cases," he says. "The first job for the team would be to collect the explosive residue. A very

dark powder is first found at the site, which is normally not washed away. This powder, even after the explosion, is never burnt fully and hence such unburnt particles are always available at the blast sites even if it is raining."

"However, the key to the investigation is to look for the initiating device known as the detonator. The control switch will also needs to be found and to be honest these items are not washed away by the rain."

"Even if it (the detonator) has moved, the forensics team does possess the expertise to locate the same downstream. In earlier days, the team used to look for clocks. But now since terrorists don't use that mechanism, the controlling unit is through wires -- that will be found at the blast site."

"However, the more important thing is that the area needs to be cordoned off and the forensics team should not be hurried. This would go a long way in getting the required clues." 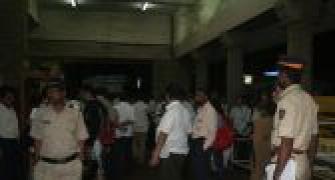