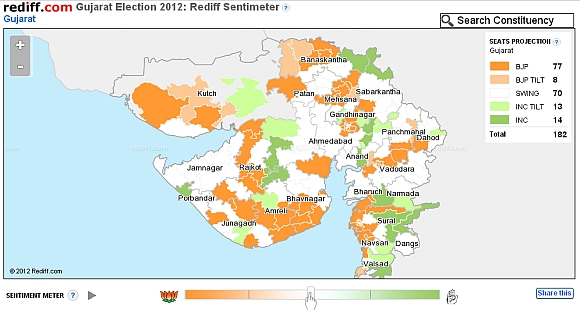 If exit polls conducted by various media organisations are to be believed, Gujarat Chief Minister Narendra Modi is all set to is set to lead the Bharatiya Janata Party into a landslide victory in the assembly elections.

Our own Sentimeter's predictions were not too far away from polls conducted by other media organisations. The 'sentimeter 'is an interactive map-based tool that predicts which of the parties could won the assembly election in 2012. 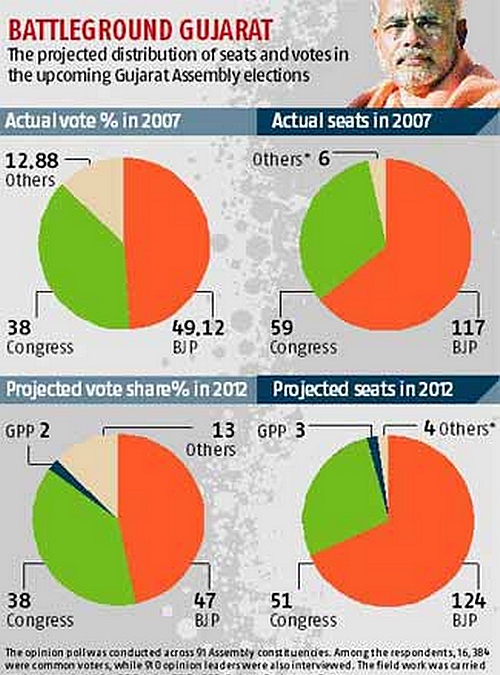 According to ABP News-Nielson opinion poll carried out in Sept. 2012, predictions are for a landslide victory for the Bharatiya Janata Party in Gujarat.

Modi-led BJP is yet again set to trample the Congress party in the upcoming assembly polls. The ABP News-Nielsen opinion poll has found that the BJP will bag a majority of 126 seats in the 182-member assembly.

According to the survey predictions, the Congress which won 59 seats in the 2007 polls, is laagering at 50 this time, a drop of 8 seats compared with the last state elections. 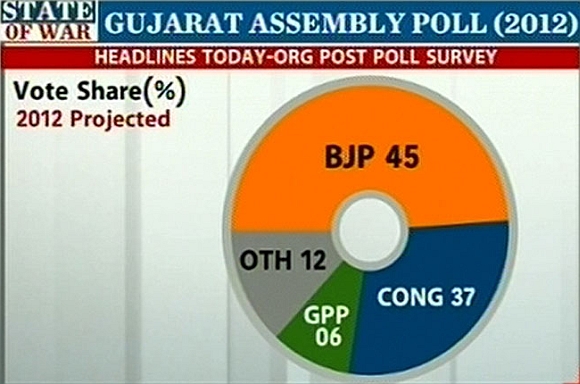 A Headlines Today-ORG survey indicated that the ruling BJP would again sweep the state with its final tally likely to be between 118 and 128 seats in the 182-member Gujarat assembly.

The Headlines Today conducted the post-poll survey across 36 constituencies. 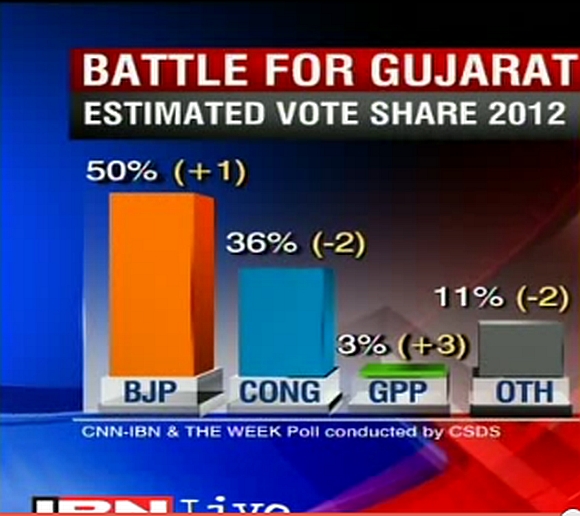 The CNN-IBN7-CDDS survey reveals that even though his close aides are feeling the heat of the law-enforcing agencies and the judiciary, Modi has consolidated his position as the Numero Uno in the state while the Congress has slipped, failing to counter an increasingly aggressive Gujarat chief minister.

Modi is helped in his mission to score a hat-trick of victories by the strong pro-incumbency sentiment, which is even greater than it was five years ago. The CSDS survey shows that 52 per cent of the voters are in favour of giving the BJP another chance to form the government, up from 48 during the 2007 poll.

Modi's personal popularity is also intact with nearly half the respondents -- 49 per cent -- backing him for the chief minister's post. None of his rivals is even in the double digits when it comes to the chief ministership stakes. 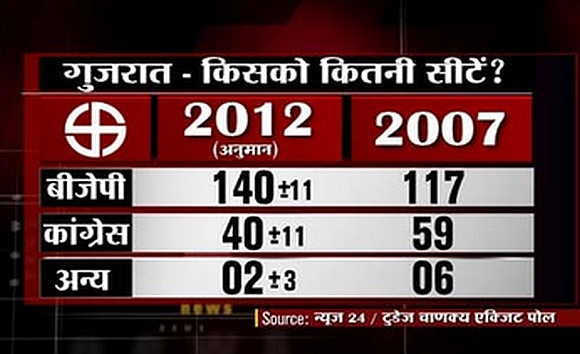 Narendra Modi is all set to rewrite Gujarat's political history by securing 3/4th majority in the Gujarat elections, according to News24-Today's Chanakya exit poll.

According to exit poll results, the BJP is set to secure 140 seats (plus or minus 11) in the 182-member assembly. This is an increase of 23 seats in previous election tally of 117.

The Congress, it is predicted, will suffer major loss with its tally reduced to 40 seats (plus or minus 11 seats). This is 19 seats less than last election tally of 59 seats.

The much talked about Keshubhai Patel factor has ended in a whimper with others (which includes Patel's Gujarat Parivartan Party) expected to win only 2 seats (plus or minus 3 seats). This is four seats less than the tally of six seats. 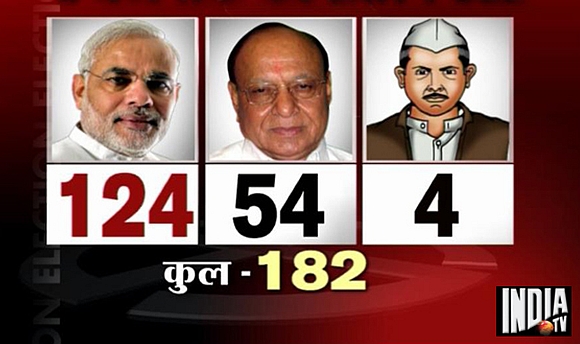 The ruling BJP under the leadership of Chief Minister Narendra Modi is all set to score hat-trick in Gujarat assembly elections with two-thirds majority, according to an exit poll conducted by India TV in association with CVOTER.

According to this exit poll, BJP is expected to emerge victorious in 124 assembly constituencies. The main opposition party, the Congress, is expected to win 54 seats while others are expected to get 4 seats.