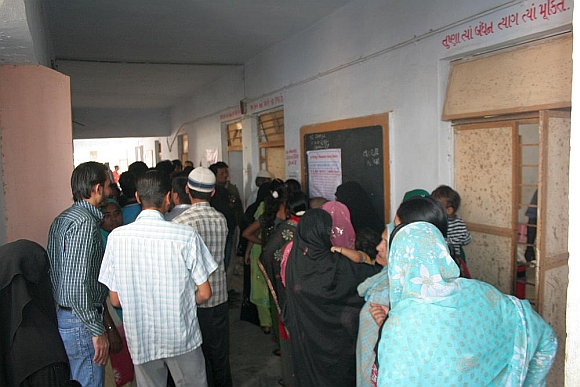 This is what he discovered:

Whatever the actual results on December 20, whatever the predictions pouring out of various news television channels on Monday, whoever is routed or emerges triumphant, the Congress will be the biggest loser in Gujarat this election.

Three Muslims from Naroda Patiya -- where the Vishwa Hindu Parishad and Bajrang Dal allegedly wreaked mayhem after the Godhra train carnage -- Mohsin Khan, Firoz Khan Rahim and Abdul Majid, all aged between 20 and 27 years, are the reasons why the Congress should worry in a state with 60 million Gujaratis.

The Bharatiya Janata Party's Dr Nirmala Wadhwani, a gynaecologist who replaced Dr Maya Kodnani, who was sentenced to 28 years in prison for her involvement in the Naroda Patiya massacre, will find the going tough against the Congress's Bhavan Bharwad.

In Maninagar, from where Gujarat Chief Minister Narendra Modi will undoubtedly emerge victorious with a huge mandate for the third consecutive time, his voters, their chest puffed with Gujarati pride, have already anointed him as India's prime minister in 2014.

In the Vejalpur assembly constituency, the Congress's Murtuza Khan will easily defeat the BJP's Kishor Chauhan, with the strong backing of Muslims from Juhapura, an area once described as 'mini-Pakistan' by Modi's former minister of state for home, Amit Shah.

This area was a part of Sarkhej from where Shah won the 2007 assembly election. Post delimitation, Juhapura has become a constituent of Vejalpur.

Details such as who will win or lose become insignificant when one meets voters in these constituencies, understand their emotions, agonies and ecstasies, hopes and frustrations.

'I voted for the BJP because that is our only hope' 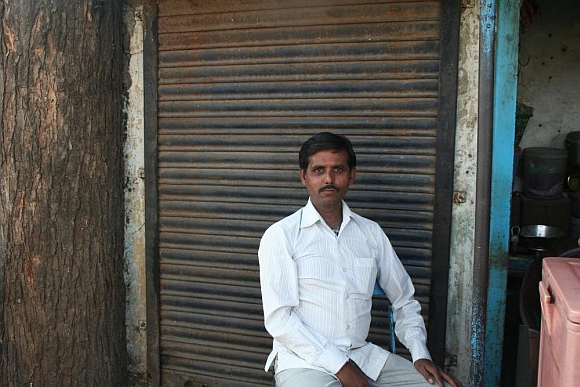 In Naroda Patiya, home to a majority of 32 convicts in the Naroda Patiya massacre, finding a family whose member was convicted takes almost two hours.

There were reports that a day before the curtain fell on the final day of campaigning, families of these convicts distributed a pamphlet, asking Hindus to vote against the BJP for not supporting the convicts.

After roaming the congested Hindu ghetto of Kuber Nagar in Naroda, one encounters Nitinbhai Mungda, whose brother Harshad Mungda is one of the 32 convicts.

Nitinbhai Mungda denies that the families of those convicted had published and distributed such a pamphlet.

"There is no such paper," says Nitinbhai, a daily wage earner, just like his brother Harshad. A couple of Hindu organisations are taking care of his family's rations in Harshad's absence.

"I voted for the BJP because that is our only hope. Agar Modi aayega to hi koi raasta niklega (If Modi is voted to power again, he will find a way to save the convicts)," he says.

If the police had done its job on that fateful day, he maintains the Naroda Patiya massacre would not have occurred.

"And then they arrested my brother," he adds, "because somebody named him as part of the mob."

'The BJP has slapped us' 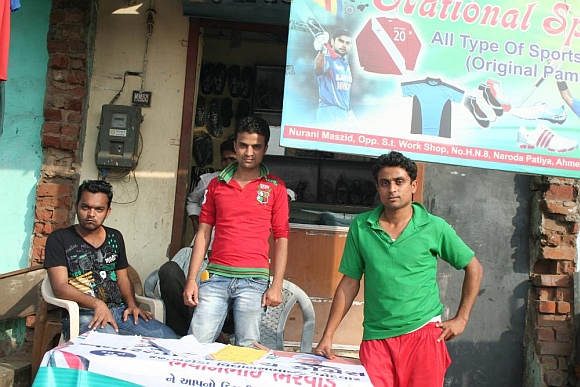 Mohsin Khan, a budding cricketer who has played for the Gujarat Cricket Association in the under-19 and under-22 formats, who was selected for the Ranji Trophy campaign but did not find a place in the final 15, and who, he said, was also selected by the Kolkata Knight Riders, voted for the Congress only because "the Congress is the lesser evil."

"We want to forget it, but the BJP is not accommodating Muslims nor showing some magnanimity towards them," he adds.

Rahim voted for the Congress's Bhavan Bharwad because he was sure he did not want to vote for the BJP. Keshubhai Patel's Gujarat Parivartan Party, he felt, had fielded a weak candidate.

"We are discriminated against when we go out looking for jobs only because we are Muslims," Rahim says, indicating that the communal divide in Narendra Modi's Gujarat is intact a decade after the 2002 riots.

"What's the difference between the BJP and the Congress?" asks Majid Abdul.

"Neither the BJP nor the Congress wants us to progress and prosper in life. For the BJP we are cannon fodder whenever they want to rouse communal passions; for the Congress we are just a vote bank," says Majid, a first time voter.

Majid voted for the Congress candidate because his brother asked him to do so.

The Congress may win the Naroda seat, but on the back of voters who lack conviction. That should, in fact, be the Congress' biggest worry, when the results come in on December 20.

All three men were manning a Congress booth outside Mohsin's sports shop that faces a dozen Muslim shops that were burnt and looted in 2002 across the road.

"As Muslims in Gujarat," says Mohsin, "We only rely on our hard work and God." 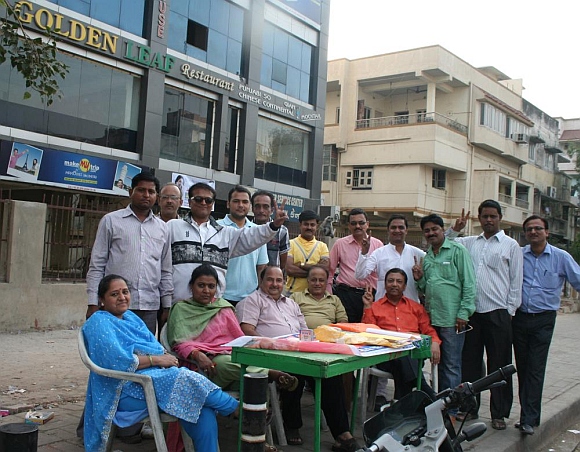 Image: Tushar Parikh (in the green shirt), Tarak Gandhi (in the white kurta). Next to Parikh is Amod Pathak (in dark glasses)
Photographs: Prasanna D Zore/Rediff.com

In Maninagar, Narendra Modi's assembly constituency, 75 per cent of voters had cast their votes by 4 pm.

BJP workers and booth officials expected an additional 10 per cent to vote in the hour left before election officials sealed the electronic voting machines under strict police supervision.

Tushar Parikh says his vote was "in favour of India's future prime minister."

Euphoric BJP workers signalled 'V for victory' signs, mimicking what their 'PM-in-waiting' did when he addressed the media after voting on Monday morning.

"Ninety per cent of Maninagar have voted for Narendrabhai. Only one community votes against him," says Tarak Gandhi, a trader of medical equipment.

Talk to voters in Maninagar about what the chief minister's future course of action should be and they respond: 2014.

These supporters want Modi to rule Gujarat "by remote control" if he becomes prime minister.

"Maninagar's Gujarati strongman will soon be India's PM. We will feel very proud of electing the country's second Gujarati prime minister (the first one was Morarji Desai in 1977)," says Amod Pathak.

'The BJP did not even campaign inside Juhapura' 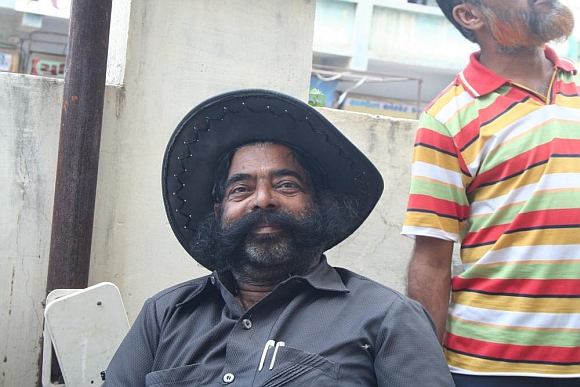 In Vejalpur, where the Congress' Murtuza Khan Pathan is pitted against the BJP's Kishor Chauhan, Khan's supporters are upbeat as they help voters find their polling booths.

"Why should Juhapura be called 'mini Pakistan'?" asks Zakir Ahmed Mohammed Hussain Hawavala angrily. He had come to vote at the Maktampur primary school in Juhapura accompanied by his wife Ameena.

Hawavala was referring to what the BJP's Amit Shah had once said about Juhapura, a predominantly Muslim neighbourhood.

Monday was election day and Hawavala was complaining that despite the couple having voted three times at the same venue in previous elections, their names did not figure in the district collector's list.

A couple of Congress workers were trying to help Hawavala find where the couple could go and vote.

Hawavala and his wife planned to vote for Murtuza Khan because they wanted Vejalpur to fall into the Congress' lap. There was no sign of the BJP or its polling agents in Juhapura.

"They didn't even bother to connect with the masses here," says Hawavala.

"The BJP did not even campaign inside Juhapura," says Pratapsinh Dodhia, president of the Congress-supported Kisan Vikas Sanghatna. "They know they have already lost this seat."

Juhapura -- which was described by French political scientist Christopher Jaffrelot in his scholarly book, Muslims in Indian Cities as a city within a city; the neighbourhood's urban landscape pepped up by booming real estate and the migration of rich Muslims to this area after the 2002 riots -- looks like fertile ground for a Congress victory.

"Do you know that Juhapura ranks at number two, after Hyderabad, as the biggest Muslim neighbourhood concentrated at one place in India?" asks Zaheer Nalwala, educationist-builder Murtuza Khan's associate, emphasising that Khan is a surefire winner from Vejalpur.