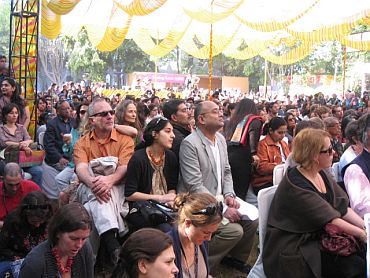 Image: Audiences were glued to their seats on Day 3 of the fest
Abhishek Mande

Rediff.com correspondent Abhishek Mande was attending the Jaipur Literature Festival, considered Asia-Pacific's leading literature event. At the fest, he managed to strike a rapport with writer-director Suparn Verma. The duo had an adventurous two days, but on Day 3 Mande was by himself as Suparn was a little under the weather.

With Suparn out of action, I bravely strode towards the venue armed with a camera, laptop, a tiny recorder and little idea of how I'd cover the event.

Along the way, I figured that if I could cover three to four sessions and get an interview with Jon Lee Anderson, the biographer and investigative journalist who was talking at the Af-Pak session earlier in the day. I'd have done a great service to humanity.

So today's diary will be quick insights into these sessions. 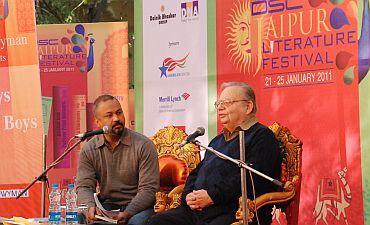 He's the guy you've read, your dad's read and so has your dad's dad! So it wasn't unusual to find the entire front lawns packed with audiences from all age groups.

Many of them, I couldn't help noticing, were women.

The moderator of the session was Ravi Singh who did what moderators should do -- he let the guest talk.
And boy did Ruskin Bond speak!

The 76-year-old author showed just why we love him so much. He spoke about how he finds himself most comfortable in Mussourie, sets his stories in small towns and that he prefers the people there to big cities. Bond, in his trademark style told us about the time when he pulled out one of his books from the bottom of dusty pile in a book store back in the 60s and bought it just to prove a point to the owner who told him Yeh nahi chalti.

Time seemed to fly during the hour-long session as Bond read a naughty passage from one of his books much to everyone's delight and regaled us with a story of how he was caught in a Dark Bungalow with a man-eating tiger hovering outside, which he very cheekily said he'd made up on the spot!

The most poignant moment of the session was when Bond read out from one of his books of the last time he met his mother. And I have all of it recorded on camera! 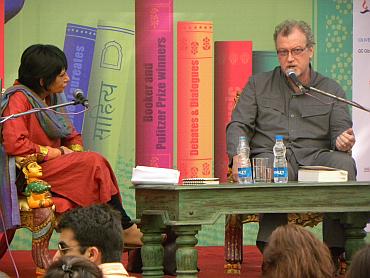 Image: John Lee Anderson (right) on Day 1 of the fest

Despite wanting to attend the Af-Pak session featuring Ahmed Rashid, Atiq Rahimi, Jayat Prasad, Jon Lee Anderson, Rory Steward and William Darylymple in conversation with Barkha Dutt on the issue, I gave it a pass to prepare for an interview with Anderson. I was glad that I did miss it because apparently I hadn't missed a lot.

Madhav Narayan, who goes by the nick of madversity on Twitter, tweeted: AfPak session was chewing gum. Smelt good but no nutrition.

The madness after the session was immense and I managed to lose Jon Lee Anderson in the process.

After over an hour of looking for him, the man walks in from front of me! Anderson, who works with the New Yorker and is the biographer of Che Guevara and has reported from various war zones across the world, loves to speak.

Anderson spoke at length about issues related to China, the United States, Pakistan, Afghanistan and the fact that India isn't half as assertive as it should be in the international arena.

He was also of the opinion that Pakistan was a failed state but added that being its neighbour India should take more responsibility in ensuring stability in the region quite simply because it doesn't have a choice in the matter.

After deciding to skip a reading by Nobel Laureate John Maxwell Coetzee, (a blasphemy, one of my former editors exclaimed) in the post-lunch session, I headed back to the hotel to get Suparn some medicines.

In the hour that followed, I discovered a fascinating fact about Jaipur -- it is easy to find dal baati churma on any given day than a medical store.

Anyway, I reached the hotel with bottles of Benadryl, Betadine and some vitamin tablets. Suparn was especially kicked when he saw the Benadryl. What he's done with it is something I will learn only later tonight.

The values of the Marathi manoos and more 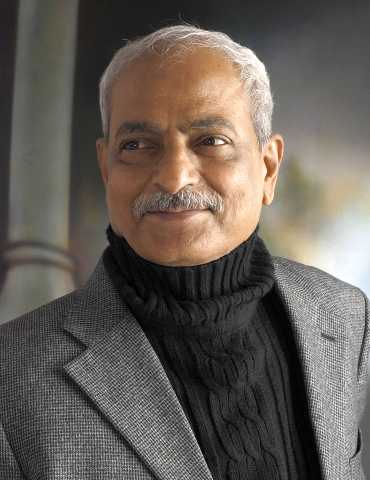 Back at the venue, Marathi playwrights Mahesh Elkunchwar and Makrand Sathe were in conversation with Vaiju Naravane.
The two veterans spoke about how the values of the middle-class Marathi manoos have undergone a drastic change.

Elkunchwar spoke about how after the '90s, the concerns of the average Maharashtrian had become more about which foreign university their children were studying in than the larger social issues

While both the panelists were of the opinion that Marathi theatre isn't exactly in its best phases today, Elkunchwar was confident that this was just a lull that would pass.

'60 years of war hasn't changed anything in Kashmir' 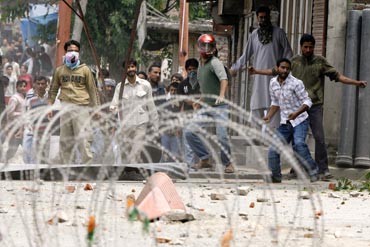 The big session of the day was one about Kashmir -- brilliantly moderated by the verteran journalist and columnist MJ Akbar.

Akbar was perhaps the best moderator for an event like this -- ruthless to the panelists, cutting them to size when they overshot what they had to say but so welcoming to voices from the audience.

Being the moderator, he also had the privilege of having the last word, "60 years of war, he said hadn't changed anything for the 60 inches of land. Maybe 60 years of negotiations will."