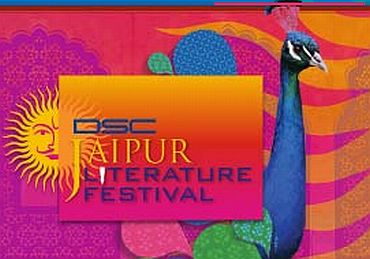 Suparn Verma & Abhishek Mande in Jaipur
Tina Brown, the founder and editor-in-chief of The Daily Beast has called it 'the greatest literary show on earth' -- a fact that the website of the Jaipur Literature Festival proudly displays on its home page, just under the masthead.

Now while that may be a slight hyperbole, the fact remains that the Jaipur Literature Festival or JLF has in barely five years become one of the most sought-after literary extravaganza of the country.

So much so that simply getting invited is seen as something of a prestige by the authors.

And why not? in a very short time, the organisers of the festival have managed to bring to the stage some of the biggest names in the literary world -- from Salman Rushdie to Shashi Deshpande to Orpan Pamukh -- they've all been here at some point to talk about their works.

The JLF has also become one of the most preferred platform to launch new authors and network. It is no surprise then that prominent publishing houses vie for space at the venue.

In its 2011 edition, the JLF will see some young and old names gathering again to discuss books, lock horns and back slap each other.

Meanwhile, click NEXT to read what happened on Day Zero...

Jaipur is not Pink City...it's some white man's fantasy 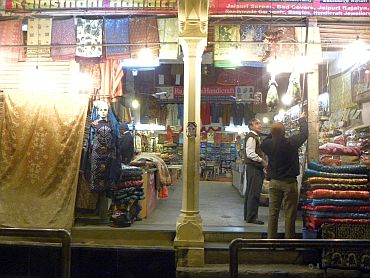 Image: A saree shop in Jaipur

First things first!!! Jaipur is not Pink City...it's some white man's fantasy, and it was attested by the gentleman behind the desk at our hotel Fort Chandragupt. Another thing while I'm at it...names can be deceptive....you will find every hotel with the tag of a palace of a fort, please keep in mind none of them are.

Anyway now that we are on the same page, let me begin from the start, after pacifing a pissed off wife that I will be missing her birthday for a good cause, I got on board the flight with another maniac called Mande (I am deliberately not gonna repeat any of the Monday-Tuesday...jokes as I have been at them all day), the flight was a little delayed but landed on time, the announcements on the GoAir flight were inaudible to say the least, but hey! it landed on time so what do I care?

The weather in Jaipur was perfect when  we landed but as the night fell we had numb fingers and lips and worse. But more of that later.

We reached the hotel/fort, and while they did the formalities, we crossed the road and had the best tea of our lives at a roadside stall. On our return we entered the freezing premises of the hotel to discover Mande and I would be sharing the same bed!!!

Rajasthani hospitality at its best 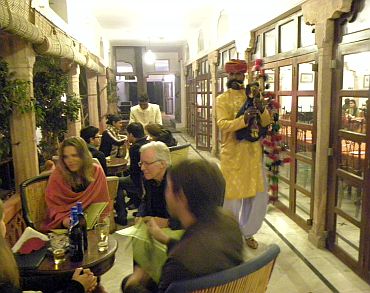 Image: At the Diggi Palace hotel

Jaipur isn't a very big town -- actually when you come from a city like Mumbai no town (including Delhi) is big for you. And when you have a literature festival AND a pharma conference (yes they have that here too) happening around the same time, getting a hotel room can be, well, quite difficult indeed.

As for sharing the same bed goes... this is after all 'PINK city', isn't it?
Anyway, we were soon at the festival venue -- a charming hotel called Diggi Palace that has, we are told, a little over 70 rooms.

What it also has are sprawling lawns, lovely grounds and a lot of space for a festival of this nature. Sure it isn't a five star property but Diggi Palace is a place that makes you feel at home. Add to it the Rajasthani hospitality and you have a winner. 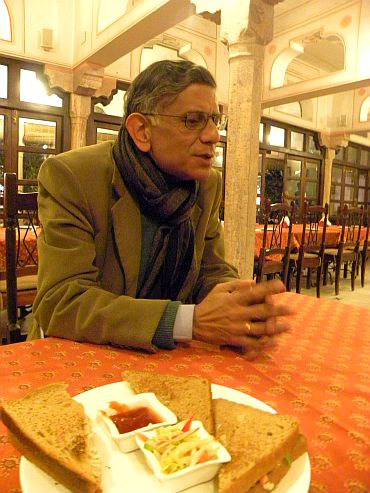 One of the first people we met at the venue was Sunil Sethi -- the veteran journalist who hosts Just Books onNDTV.

The charming man, dressed in a lovely scarf and a smart jacket spoke with us about his upcoming book -- The Big Bookshelf -- a collection of interviews with 30 prominent writers of our times.

In this six years of the show, Sethi told us that he'd interviewed over 300 writers and confessed that it was 'a task indeed' to pick these 30 names. The book has four Nobel Laureates, two Booker Prize winners and a wide gamut of authors, including the likes of Javed Akhtar and Chetan Bhagat.

Suparn tried extra hard to get him to tell us his favourite amongst the 30 to which Sethi diplomatically replied: "It would be like asking a lawyer to pick his favourite client."

What Sethi did tell us though was a hilarious incident of his interview with Umberto Eco.

Getting an interview is all about perfecting the art of con. Sethi narrated incidents about how and where he got his interviews in his amazing cultured voice which I would best describe using the word 'coiffured'!

He has interviews Alexander McCall Smith in the middle of nowhere in a house called Tickly Bottom! He found Gunter Grass walking in a bylane of a small Indian town, while he interviewed Mahasweta Devi in Frankfurt!

But my personal favourite was how he managed to interview Umberto Eco! The Italian ambassador in Delhi managed to veer away Eco after his talk at the India Habitat Centre in Delhi straight into his house, where Sethi has set up his camera in the ambassador's library, and once Eco was in, the doors were sealed.

But Eco walked in, looking like a distant cousin of Pavarotti and took over the show. The jovial writer who loves to delve in semiotics spoke about his encounter with a Indian cabbie in New York who upon learning that Eco is an Italian was very interested in knowing who were his enemies? After all the poor cabbie was living in a building where the Pakistanis were his natural enemies and so were the Bangladeshis, so his whole world view revolved around who was whose enemy! 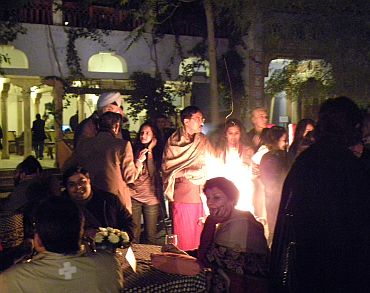 Sunil Sethi agreed to appear on the Rediff Chat on Monday and off we guys went for a walk in the gardens of Diggi Palace which was being set up for a buffet dinner and the adventure continued as the bar was thrown open and the conversations flew fast and furious.

Sonia Falerio author of Beautiful Thing about the life of Mumbai bar dancer stood around a bonfire as lensmen hovered everywhere trying to figure out the authors, I mentally felt sad as their jobs would be so much easier at a Bollywood do, but then this is one festival where the writers are the rockstars.

The genial Rahul Pandita author of The Absent State was talking about his talk on Sunday and mixing around, while the stunning Chikki Sarkar, editor-in-chief of Random House had dinner. I want to stop here and make a special mention of the Rogan Gosht, my compliments to the chef, it was one of the best Rogans I have had the pleasure to taste.

Meenakshi Madhavan author and writer of the blog The Compulsive Blogger was checking out the Penguin Bookstore which was being put together while she discussed some of the cute men at the venue. Meenakshi is also going to participate on The Rediff Chat and do a mad whacky interview with Mande and yours truly.

The wine flowed freely but tomorrow I will review the hot butter rum, a speciality of the bar called Flow at Diggi Palace recommended to me by a dear friend, she has promised to buy me one and in return I shall buy her one, I don't know how this deal shall work out but will keep you posted off the same on Friday.

Bagpipes, dhols and the winter night 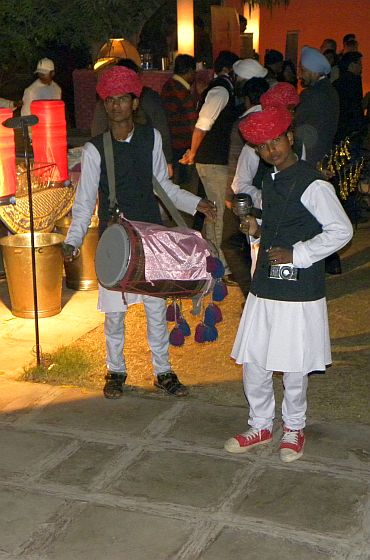 Even a little past 11, Diggi Palace wore a festive look. Men and women dressed in their winter best -- don't believe weather.com if it tells you Jaipur is 'partly clouded' and 'sunny' because it isn't -- were chatting away, with bagpipes and dhols being played in the backdrop.

Later, as the dust settled on the grounds of the venue, the lights still very much on, Diggi Palace was preparing for a new day of hectic activity.

We are now back in our room, in our bed, mildly wondering what lies ahead tonight, I hope Mande does not snore, and I hope I don't end up kicking or cuddling him by mistake, but then its a cold night! Anything can happen...

Now don't let your imagination get the better off you! Leave that to the writers!

You can follow Suparn and Abhishek's updates from the Jaipur Literature Festival:www.rediff.com/jaipurlitfestival
More