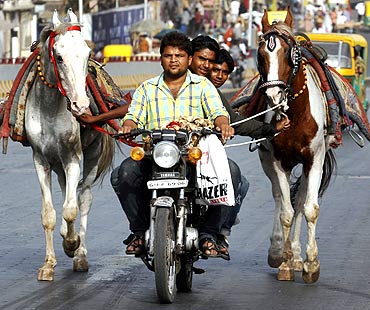 Image: Horse owners on a motorbike as they pull their horses along a road in Ahmedabad
Photographs: Amit Dave/Reuters Vipin Vijayan

Corruption won't cease as long as we keep paying Rs 50 to escape prosecution for jumping a signal. Our governments are a reflection of what we are.

If the roots are rotten how can one expect the fruits to be sweet?

Vipin Vijayan on the flaws that corrode our vibrant country.

As India completes its 64th year of Independence, a lot of the baggage it used to be identified with has stayed on.

Having a 'jack' in a government office still gets things done smoother (with a few bundles of currency, it still gets more smoother);

The girl child is still considered a curse;

Despite 'figure-backed' tall claims, the number of people in India who are below the poverty line is still over 300 million;

MiG-21s still keep dropping off the sky; Bofors is still a mystery;

Pakistan is still an 'arch-rival'; China is still a threat;

Doordarshan still lives in the pre-historic make-believe world of its own;

Hockey is still India's national game; the tiger the national animal (both of which are dwindling today);

70 per cent of India's villages don't get a full-day's electricity;

Women still can't walk alone on the street after 10 pm in the nation's capital;

The definition of literacy in India is still based on the concept 'If you can write your name, you are literate';

Zebra crossings are still meant only for four-legged species; and

Cops still let you off for jumping a traffic signal for Rs 50.

No matter who's in power, things remain the same 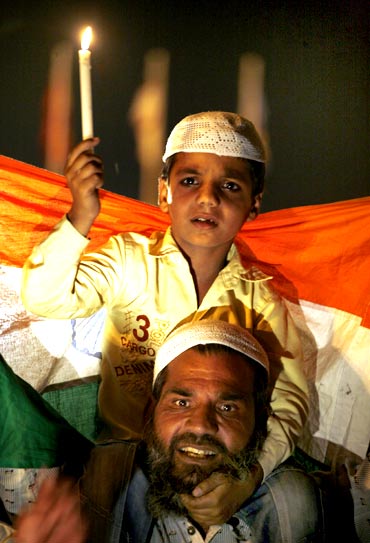 Image: A supporter of social activist Anna Hazare and his child attend a candlelight campaign against corruption at India Gate in New Delhi
Photographs: Parivartan Sharma/Reuters

The only people who really have improved are our beloved netas. Each one seems to be jostling to stake claim to have embezzled a bigger amount. And they are successfully doing so as well.

Travelling back home from work well past midnight, the cab driver and I got into an argument. Nah, not over the fare, but about what is not fair around us.

After a few more whys, he came up with a solution. The entire country should come out on the streets and protest. I laughed out aloud. Seeing him perplexed, I told him that people are so busy figuring out their lives that they wouldn't have the time to make a united front.

Also, even if the government buckles to public pressure and agrees to do something about it, no matter who's in power, things are going to stay just the same eventually.

There would be more committees, more meetings, more reports... and then nothing.

The unnees-bees and chalta hai fundas run through the veins of India. Sundarlal Bahuguna tried, Medha Patkar tried, and more recently Anna Hazare and his Sena tried. All in vain. The lives of over a billion Indians continues like clockwork.

How much caste still dictates our life is shocking 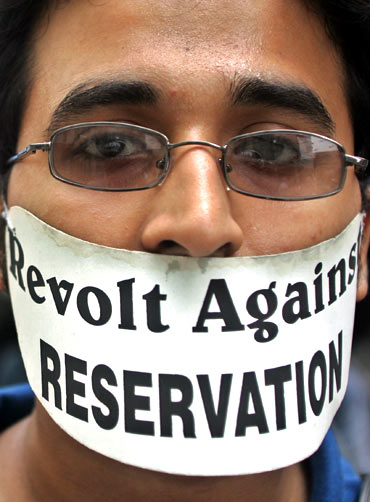 Image: A medical student with an anti-reservation poster during a protest in a Kolkata hospital
Photographs: Reuters

Some months ago while I was swaying my way home in a suburban train, a sharp exchange of the choicest of cuss words caught my attention. Apparently, a bespectacled blue collared man in his mid-30s had nabbed someone who had got into the first class compartment to escape the evening rush.

After things settled down, I asked him how he picked the odd one out from the 50-odd souls in the compartment. His instant reply, shakal se hi neechi jaat ka lag raha tha (he resembled somebody from the lower castes).

How much caste still dictates our day to day life is shocking.

Theory never interested me during my college days in Delhi. The charm of Sociology was dead and buried by the end of the first half of the first year in college.

Obviously, the fact that the curriculum in our country's colleges had hardly changed in the last two decades or so didn't help matters either.

Theories about society propounded by white-haired social thinkers around the time tigers became extinct in Bali used to bore us to death. Amidst the back-bench gossips and snores, the only bit of academic rays that reached out to us was when the topic of discussion was about varna and jaati (caste and sub caste).

People in India grow up with caste in their pockets. The equation is visible all around us. From college admission forms to students' unions to public transport to government offices to mainstream politics -- caste plays and dominates. 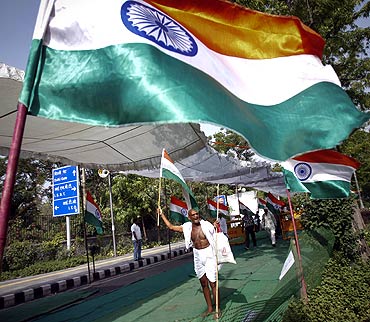 I hate watching debates on news television channels. The opinions of clowns who appear on these debates -- the so-called voice of the aam aadmi -- make me puke. Every time, the same old government bashing, Opposition bashing, character bashing, question this, question that -- there is no solution available ever.

Recently, following the News of the World phone hacking scandal in United Kingdom, one such people's channel held a debate on media ethics. One wise crack was of the opinion that India had thankfully not yet witnessed tabloidish journalism. I was left wondering what he's been smoking up.

The media in particular fuels people's thoughts and desires. A half an hour package on 'suspected' witchcraft in Jhargram, or a three minute video (put in a loop for the next 27 mins) of a wife beating up a cheating husband makes for primetime news on regional channels. So much for the quality of journalism.

As vibrant as this country is, there are inherent flaws in it too. An arrest of Suresh Kalmadi or A Raja or the exit of the United Progressive Alliance government won't end corruption. It won't cease to exist as long as we keep paying Rs 50 to escape prosecution for jumping a signal.

Our governments are a reflection of what we are. If the roots are rotten how can one expect the fruits to be sweet?

Let's be practical. Many Indpendence Days will come and go and I probably would be writing the same article. Things won't change. Yeh hai India meri jaan!!!

Also read: Why Indian royals still have a peculiar hold on us
India, you've come a long way
Indifference, not corruption, is our most threatening malady