Indifference, not corruption, is India's most threatening malady 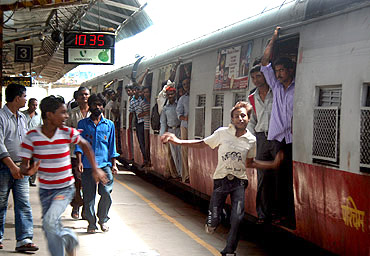 As long as millions of our poorest, hungriest, youngest and oldest citizens continue to get the short end of the stick, we will remain nothing but a hollow version of a democratic nation, says Sanchari Bhattacharya as India readies itself to celebrate its 64th Independence Day.

I had seen her while on my way back from work one day, in a crowded second-class compartment of Mumbai's indispensable local train.

She was old and frail and could barely keep her balance. She was holding on to a clutch of glittery arm bands, the kind very often sold by hawkers on the city's beaches. But among the tired, world-weary commuters in that compartment, there were few takers for her wares.

The old lady's heavily wrinkled face broke into a grateful smile as a kind-hearted woman bought an armband and handed her a ten rupee note.

Mumbai's jam-packed local trains -- as any hardened commuter will tell you -- strain one's limits of endurance, and sometimes one's conscience. There are heartbreakingly young children fighting through the crush of bodies to sell their goods, limbless hawkers dragging themselves on the mucky floor and blind beggars haplessly being pushed around during rush hour.

After nearly a decade of travelling on local trains -- and nearly three decades of living in a Third World country -- I had considered myself to be immune to the naked truths of poverty. But something about the woman on the train that day, with tell tale signs of how cruel life had been to her, had dented my jaded demeanour.

I had read in an article years ago that even First World countries have their share of poverty, but they don't suffer the kind of debilitating penury crores of people in Third World nations live with. The kind of poverty that 'doesn't let you breathe, that drags you down'.

In India, the poor often have nowhere to go; even the Lord Almighty can't save them.

Please click Next to read the next part of Sanchari's column.

Scores of Indians remain more unequal than others 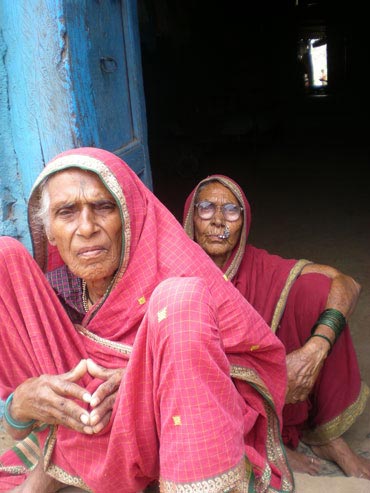 A friend of mine recently met two extremely young, destitute boys at the NGO she works in. The boys told her they had escaped from their respective homes in rural India in search of a better life in Mumbai.

Homeless and penniless, they had found themselves in the vicinity of one of the city's biggest temples.

When they were caught unawares by the incessant rain Mumbai is notorious for, they had sought shelter in the nearby petrol pump, eateries, housing societies and finally, the temple. They had been turned away at every door; the police personnel manning the temple compound had told them that it had shut for the night.

This particular temple, reportedly on the target list of some terror outfits, has in the last few years turned into a fortress with mammoth barricades, metal detectors, stringent security checks and watchtowers manned by bored policemen.

While hundreds of thousands of people jostle with each other to get a glimpse of the resident deity every day, the temple authorities allow a separate, quieter darshan for those willing to pay. There is a third entrance for VVIP devotees -- superstars and politicians -- who visit the temple in the dead of the night to avoid the public. The temple never shuts for them.

We can brag about being the world's largest democracy. But as long as millions of our poorest, hungriest, youngest and oldest citizens continue to get the short end of the stick, we will remain nothing but a hollow version of a democratic nation.

The basic tenet of a democratic society is the right to equality, a goal we have failed to reach even 64 long years after Independence, as tens of millions of Indians remain damned, more unequal than the others.

And we can take the easy way out and blame successive governments for failing millions of its people, but as the more privileged members of our criminally unjust and unfair society, have we bothered to do anything to right this wrong?

Liberalisation has created a splintered nation of haves and have-nots 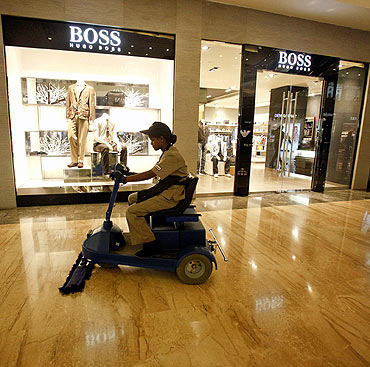 Image: Inside a shopping mall in Mumbai
Photographs: Vivek Prakash/Reuters

This year, we celebrate twenty years of the liberalisation of India's economy. Liberalisation ended the stifling License Raj system and redefined the great Indian middle class. It ostensibly gave many, many Indians the power to chase their dreams.

A lot has been written about the two Indias that exist together, but we, the Young India and the Not-so-Young India, often pretend that the Other India doesn't exist.

People like us who build our lives around acquiring the latest iPad or the next high-end mobile phone.

People like us who spend our entire lives in pursuit of bigger flats or bigger cars.

People like us who are willing to spend more in a weekend than we pay our domestic help for the entire month.

People like us who crib about what an eyesore slums are or how annoying the beggar children at traffic signals are.

People like us who are absolutely helpless without our maids, cooks and drivers, but don't hesitate to treat them like second rate citizens.

64 years after Independence, India has failed those who needed deliverance the most 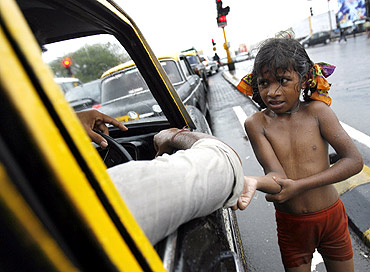 Image: A little girl begs for alms in the rain in Mumbai
Photographs: Arko Datta/Reuters

India, according to a recent study, is one of the least charitable nations in the world. Thanks to liberalisation, more and more Indians are earning a lot and spending a lot. We just don't believe that much in sharing or giving, most of us anyway.

Such a blanket statement, of course, is being unfair to the many who religiously give away a part of their annual salaries for worthier causes. It is especially unfair to the many Indians who have given up lucrative jobs and promising careers to work towards building a better, more humane society.But in a country of 1.2 billion, we really don't have enough of them.

Indifference, not corruption, is the most threatening malady that ails India today.

Even in a city like Mumbai, a city of dreams and denials, the Other India overlaps with our world against our best efforts. It makes its ominous presence felt when little children beg at traffic signals, when entire families sit hopelessly near Chowpatty after their hutments have been razed, when we recoil in disgust as we drive past stinking public toilets near slums, each of which are used by over 800 people every day.