Sign in  |  Create a Rediffmail account
Rediff.com  » News » IMAGES: The last spacewalk of the US shuttle era 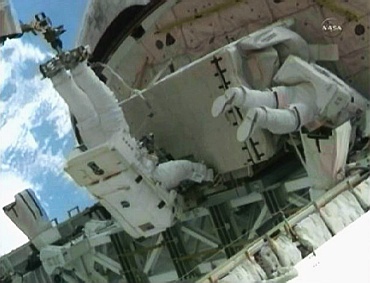 Image: Astronaut Ron Garan (C),holds the pump module as he is assisted by fellow spacewalker Mike Fossum (R) as the pair secure the module in Atlantis' payload bay for its return to Earth in this still image taken from NASA TV
Photographs: NASA TV/Reuters Seema Hakhu Kachru in Houston

Two American astronauts wrapped up the last spacewalk of National Aeronautics and Space Administration's space shuttle era at the International Space Station, where Atlantis is docked on the final mission of the 30-year US programme.

Ronald Garan and Michael Fossum, already aboard the ISS as part of the six-member international Expedition 28 crew when Atlantis arrived on Sunday, successfully completed their repair and maintenance tasks at the lab.

The main objective of retrieving a failed cooling ammonia pump from the orbiting outpost and placing it into the shuttle's payload for return to earth was tackled early in the six hour, 31 minute spacewalk.

Soon after this astronauts Fossum and Garan installed a materials science experiment on the station's power truss, serviced a robot arm attachment fitting and installed a thermal cover over an unused docking port. 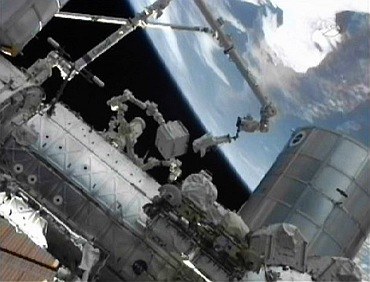 Image: Mike Fossum (C), on the end of the International Space Station's Canadarm2 works outside the station during his spacewalk in this image from NASA TV
Photographs: NASA TV/Reuters

The astronauts then made their way back to the lab's Quest airlock module, closed the hatch and began repressurising, officially ending a six-hour 31-minute spacewalk, the final excursion of the space shuttle era.

"You got everything done plus one bonus task and you're finishing perfectly on time. The next spacewalk by US astronauts is not scheduled until the fall of 2012", NASA said.

Wednesday's outing marked the 249th spacewalk by US astronauts in history, and brought the total time spent on spacewalk assembly and repair of the ISS to 1,009 hours and nine minutes, mission control in Houston said. 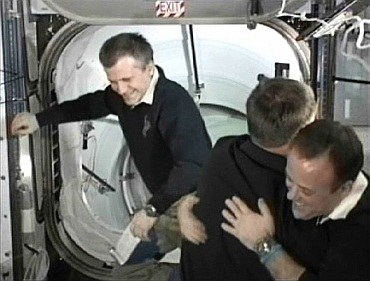 On Tuesday, NASA decided to extend Atlantis's mission by a day, so the astronauts will now spend 13 days on their final journey to space before the US shuttle programme closes down forever.

Atlantis's key mission is to take advantage of the massive cargo space available one last time in order to restock the space station with a year's worth of food and supplies.

The Atlantis crew began work on Tuesday with their six colleagues at the ISS to transfer nearly five tonnes of goods to the orbiting outpost and succeeded in unloading the Raffaello multipurpose logistics module.

Other supply ships from Europe, Japan and Russia will be able to stock the ISS when the shuttle programme retires after Atlantis, but the space available on the shuttle is unparallelled. 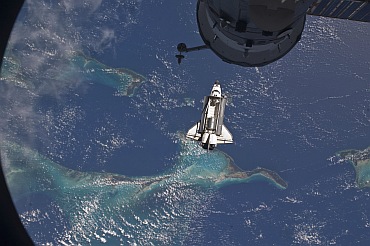 Image: Atlantis is seen over the Bahamas prior to docking with the International Space Station in this photo provided by NASA
Photographs: NASA/Reuters

The container is packed with 4,265 kg of spare parts, spare equipment, and other supplies -- including 1,215 kg of food -- that will sustain space station operations for a year, NASA said.

Over the coming days, the combined crew will be transferring items from the Raffaello to the station and moving more than 2,540 kg of old station gear back into the module for the return to Earth.

Atlantis's flight marks the end of an era for NASA, leaving Americans without their own vehicle for sending astronauts into space until private industry comes up with a new capsule, likely by 2015 at the earliest.

With the shuttle gone, only Russia's three-seat Soyuz capsules will be capable of carrying astronauts to the ISS - at a cost of more than $50 million per seat. With the extra day in space, Atlantis is now scheduled to land back on Earth on July 21, mission control in  Houston said.
More
Print this
article