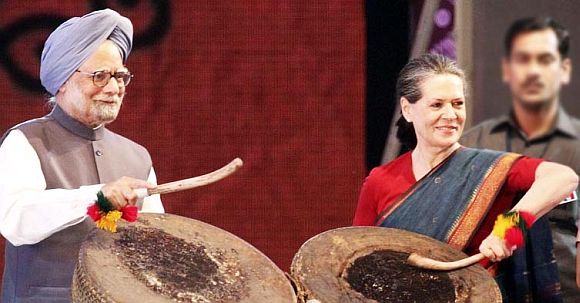 Sheela Bhatt analyzes how Sonia Gandhi's leadership has failed her party, and how India has suffered

In the last eight years, under her leadership, her Congress party has not been able to influence its own government to change the template to govern this difficult country.

From 2004 to 2008, during the Congress party-led United Progressive Alliance government's first term, she wielded authority while her nominated Prime Minister Manmohan Singh carried the burden of accountability.

The government's wrongs didn't touch her, and its strengths were duly credited to her.

She seemed to have a halo around her -- much to the chagrin of her critics -- and it perfectly suited the Congress party, which has an infatuation for dynastic rule embedded in its DNA. 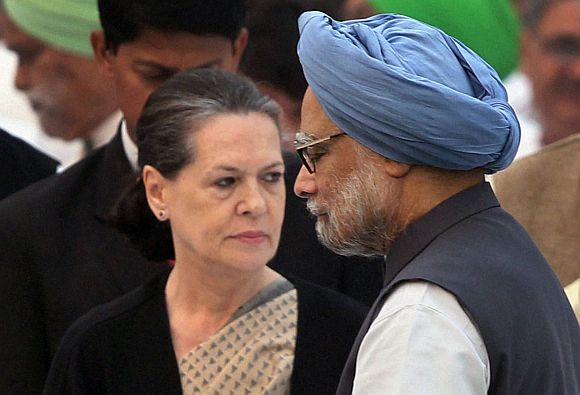 The flood of scams threatening to drown her party prove that the Congress party has again turned into a gigantic, pan-Indian machinery to make money from crony capitalists, their agents and fixers -- who are ready to loot and plunder resources that are the property of the Indian people.

To be fair to Sonia, this malady is not new to the Congress party. Since the days of Indira Gandhi's post-Emergency rule, the Congress party -- and in turn India -- has been in the grip of shady operators who have been using politicians to pursue their own economic goals. Now, the disease has become cancerous, and has spread to most parties and most states.

Sonia's steady rise since 1998 and her two successive election victories gave enormous strength to the Congress party, brought it back in power in New Delhi, gave India political stability.

There is no doubt that May 18, 2004, Sonia touched millions of Indian hearts by refusing to become prime minister. In a supremely clever move, she stepped back to leave the highest post to her trusted lieutenant, Manmohan Singh. It wowed political pundits not just in India, but across the world.

Cut to the present.

'Congress's cupboard is filled with skeletons, and they are tumbling out one after the other' 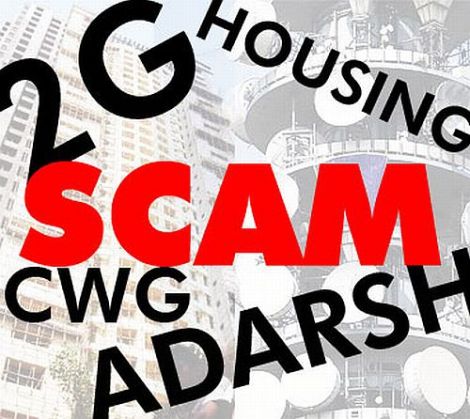 There are many reasons for India's economy being in bad shape, but the blame for the rampant corruption goes squarely and largely to her party. Its cupboard is filled with skeletons, and they are tumbling out one after the other.

It began with the Commonwealth Games scam and continued with the 2G scam, for which the government -- after acting in a bizarre manner that benefitted only large corporations making money off it -- tried to shift the blame only on the minister, A Raja, who belonged to a coalition ally, the Dravida Munnetra Kazhagam.

The Comptroller and Auditor General's report revealed allegations of mishandling of budgets of many airports that have been built recently. And in recent weeks, the serious allegation of complete mishandling of India's coal policy has further tarred the Congress party and the government's reputation. 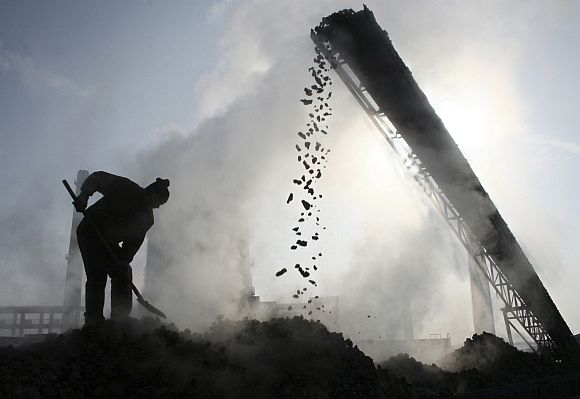 Coal is crucial for power-starved, global-influence-aspirant India. And this government was giving it away for free. Its fig leaf of an excuse is that previous governments were also doing the same. Yes, there were genuine power producers who needed cheap or free coal to produce cheap power.

But Sonia's government allotted free coal blocks to many fixers, shady operators and doubtful political characters who just wanted to make money by selling at hefty rates the right to mine coal -- a right that was given to them for free.

The Central Bureau of Investigation -- which will not win an award for impartial investigations into people in power -- is investigating some of these beneficiaries of the government's coal largesse. Some of them are directly related or closely linked to the Congress party, or its ministers in government.

The shouts on the streets and the whispers in the power corridors are that these coal blocks must have been given as quid pro quo for fattening up the Congress party's coffers. Unlike the 2G scam, there remains no doubt that the coal scam's trail leads largely to the doorstep of Congress party leaders.

Recently announced statistics reveal the Congress party has Rs 2000 crore ($363.3 million) in its party funds. The main Opposition Bharatiya Janata Party has half that amount. 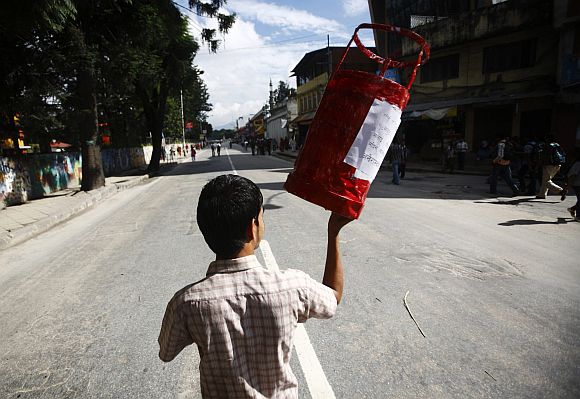 But more than corruption, what has weakened this government most is price rise.

To quote Bihar Chief Minister Nitish Kumar, 'Whenever the Congress (party) comes to power, it brings price rise with it.'

September 13, the UPA government hiked diesel prices by Rs 5.62 per litre, a steep hike, and restricted the supply of subsidised cooking gas to six cylinders per household in a year. It is like a massive blow to the face for the common Indian. Because fuel price hike -- especially diesel, used in trucks that ferry goods -- translates to hike in prices of all essential commodities. And cooking gas is probably the most essential commodity for any Indian family.

With Opposition parties demanding a rollback of the hike, Congress party spokespersons' argument -- that a hike is a must to save the economy -- rings hollow.

Sonia wove her public image with great care. She had nursed the pain of the taint of the Bofors scandal of the 1980s on her family long after her husband Rajiv Gandhi's death and long before she stepped into public life.

Now, with the party reins in her hands, the party is facing much, much more serious corruption charges. And that halo and enigma attached to her personality, which added to her charisma once, is now sending different signals.

'The idea of dual power centre was an invitation to disaster' 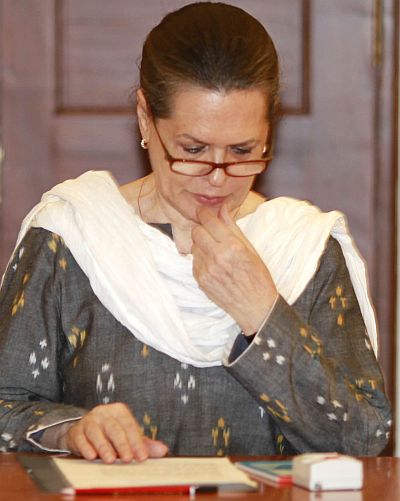 Many analysts point out that being distant and enigmatic is not the need of the hour.

He agrees that "it is time to assess the family role and her leadership role in the current crisis."

Many in New Delhi believe Mehta when he says, "Recent scams have taken a lot of sheen off her public image."

Inder Malhotra, veteran journalist and author of a book on Indira Gandhi, tells rediff.com: "The idea of dual power centre was an invitation to disaster."

The disconnect from the masses began, Malhotra says, when Prime Minister Singh didn't get a free hand and Sonia and her son Rahul hardly spoke to people.

Malhotra points out: "See, the diesel price was increased by their government, but neither mother nor son has spoken a word."

Rasheed Kidwai, author of a book on Sonia Gandhi, puts it bluntly: "The arrangement of dual centres of power has turned Singh into a tragic figure." 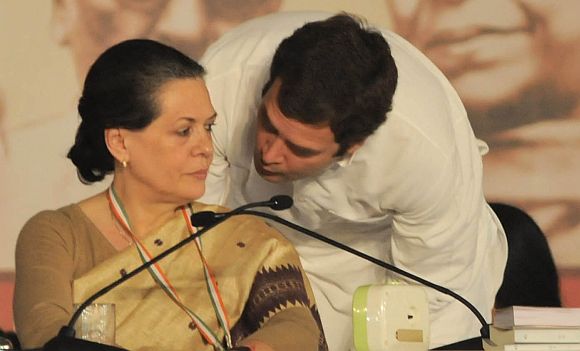 Another thing that has not worked for Sonia is her plan for her family's continuation in politics. The party threw its weight behind Rahul Gandhi around 2008-2009.

Prime Minister Singh's image was not allowed to flower in the public space. Instead, it was Rahul who was thrust into the limelight.

And in Uttar Pradesh, the state that sends the maximum number of politicians to the Indian Parliament, Rahul flopped.

The setback is affecting Sonia's standing in politics. Her health may have slowed her down too, but her political mission -- Rahul's career-building -- is clearly failing.

There have been sporadic displays of 'leading from the front', like when recently in Parliament Sonia took on BJP leader L K Advani for calling the UPA government 'illegitimate'. But the clarity of purpose is missing. No big ideas are emerging from 10 Janpath, Sonia's home in Delhi.

The biggest negative during her last eight years of leadership is the weakening of public institutions. She is blamed for selecting weak personalities to lead institutions that need true leaders. Her detractors call it the Pratibha Patil (India's previous president who was plucked from near obscurity) syndrome.

The selection of Sushil Kumar Shinde, failed power minister, as the home minister is the latest example of the syndrome of rewarding the undeserving.

Can Sonia Gandhi retrieve lost ground? Can her leadership rejuvenate the Congress party and the government? She has done it before, in 2004. But now, the jury is out on it.

Some analysts, including Kidwai, think her two biggest strengths, even now, are secularism and her unchallenged leadership within the party. She is the umbrella under which the party preserves its pan-Indian unity.

Unlike in the BJP, her leadership doesn't see any covert intrigues to undercut her decisions.

'The next six months will test Sonia's mettle' 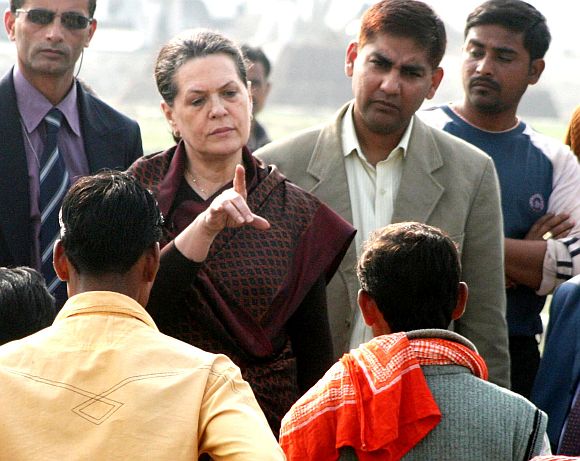 Also, even though her party's credentials are suspect now and then, in taking on communal forces Sonia has never shown a weak nerve on this issue.

As India heads to its next election, her strength of being an "uncompromising secularist" will help the party, says a Congress party leader, speaking to rediff.com on condition of anonymity.

If Narendra Modi emerges as the strongest BJP leader after the Gujarat state election, the Congress party leader from Kerala argues, Sonia will become indispensable once again for India's secular forces.

The next six months will test Sonia's mettle. Two crucial pieces of proposed legislation, the food security bill and the land acquisition bill, enter into their final stages. The government is eager to push the economic-growth agenda -- and that doesn't suit the Sonia-backed, Left-leaning National Advisory Council.

Samajwadi Party leader Mulayam Singh Yadav, an important supporter of the UPA government, has recently spoken bitterly about the scam-tainted government and questioned Rahul Gandhi's credentials. Compare this to 2004-2009, when what Sonia said was gospel for allies and Congress leaders alike.

And the Congress party campaign question -- that beat the BJP's India Shining propaganda in 2004 -- will be asked to Sonia's own party in the next election: Aam aadmi ko kya mila (What did the common man get)?