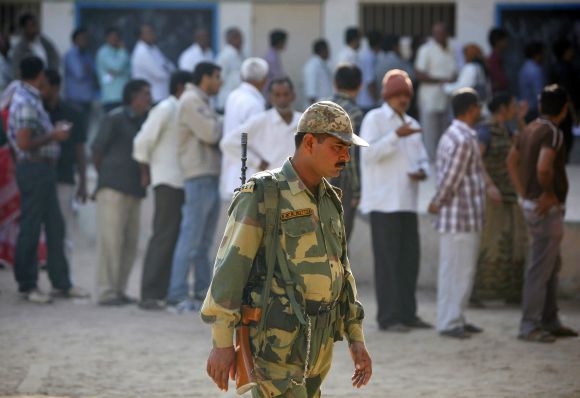 Voter turnout of 67 per cent was recorded on 87 seats across Gujarat during the first phase of state assembly elections on Thursday.

An impressive voter turnout of more 67 per cent was recorded across Gujarat during the first phase of state assembly elections on Thursday. 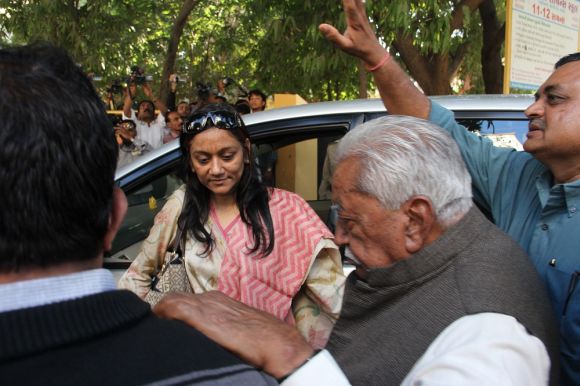 The voting held amid tight security was peaceful barring a couple of incidents of violence and a few complaints of technical glitches in Electronic Voting Machines.

The second phase will be held on December 17 while the counting of votes will be taken up on December 20.

A high voter turnout in Saurashtra and South Gujarat is being considered significant by the political observers.

The Saurashtra region, which is home to the powerful Patel community, could pose a tough challenge to Modi with Keshubhai Patel, who quit the BJP to form GPP, leading the charge. Modi succeeded Patel in 2001 as chief minister before he led BJP to thumping victories in 2002 and 2007.

The voter turnout is the highest in the elections held so far in Gujarat. 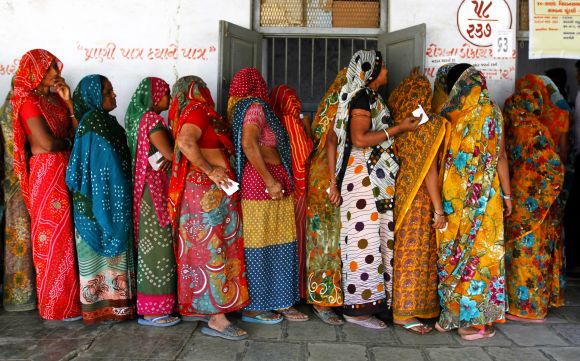 Image: Women stand in a queue to cast their ballots outside a polling booth in Sanand on Thursday
Photographs: Amit Dave/Reuters

A total of 846 candidates are in the fray for the first phase. BJP has fielded candidates for all the 87 seats while Congress is contesting 84 and GPP for 83 seats.

A total of 48 seats in Surendranagar, Rajkot, Jamnagar, Porbandar, Jamnagar, Amreli and Bhavngar are considered crucial as political observers are keenly watching how the Keshubhai Patel factor plays out in the region.

People came out in large numbers since morning to cast their vote. Within three hours, the voter turnout was 18 per cent and by 1 pm it was 38 per cent. The figure went up to 53 per cent by 3 pm.

"Unprecedented rush in voting was witnessed across the four constituencies in Ahmedabad district, a stark difference from the previous assembly elections, when voting during the morning hours had remained generally dull," Chief District Election Officer Vijay Nehra told PTI a few hours after polling commenced.

At Shree Sanskar Vidyalaya, a polling station on the Ahmedabad-Viramgam highway that falls under Sanand assembly seat, more than 50 voters above 80 years, cast their votes in the first hour itself. 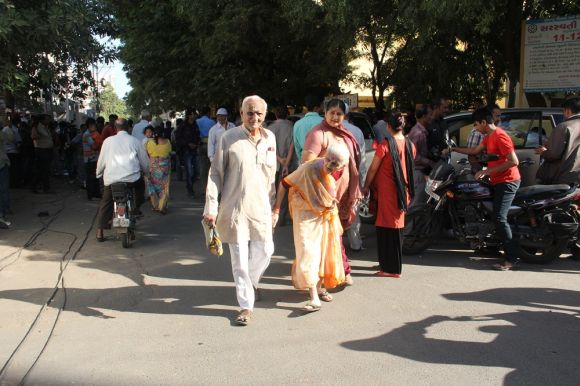 One Bhailal Patel, 64, who is bedridden for the past 12 years, cast his vote and said, "I wanted to cast my vote as I have never missed voting since I attained voting age."

He was brought to the polling station by son Kaushikbhai.

In Rajkot, during the fag-end of voting, police resorted to lathicharge to disperse supporters of Congress and BJP candidates who clashed with each other.

A minor fight erupted between the supporters of Kashyap Shukla, BJP candidate, and Indranil Rajyaguru of Congress near Rajkot Dairy on Bhavnagar Road, police said.

There were reports from some polling booths in Viramgam constituency, Sanand and Surat of malfunctioning of EVMs. Many people also complained of absence of their names from the electoral rolls.

"Just as Gujarat broke the record by registering 67 per cent record voter turnout, the BJP will break all records in winning the state assembly elections," Modi said, addressing an election rally in Vadodara. 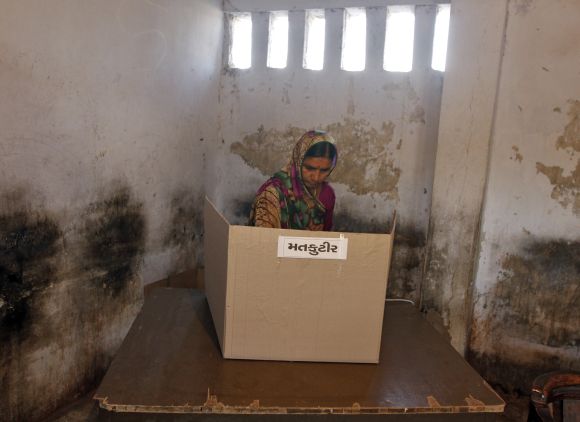 Image: A woman casts her vote at a polling booth in Sanand on Thursday
Photographs: Amit Dave/Reuters

Congress spokesperson Manish Doshi said such a high voter turnout indicates that the people are fed up with the ruling BJP and want a change. "The result will be unprecedented," he said.

Among the 15 districts that figured in the first phase, Tapi district in south Gujarat recorded the highest 76 per cent turnout while Jamnagar recorded the lowest -- 63 per cent.

In the seven districts of Saurashtra which went to the polls, Junagadh recorded 67 per cent, Rajkot 68.8, Amreli 65.6, Porbandar 63.3, Surendranagar 68 and Bhavnagar 68 per cent.