Gujarat: In Godmother's den, her son roars like a tiger 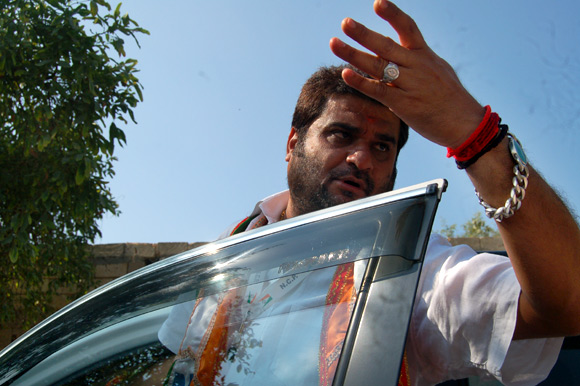 Santokben Jadeja's son Kandhal, contesting from Kutiyana assembly segment in Saurashtra, is all set to carry forward his family's legacy with no fear of his opponents or shame about his criminal record, reports Prasanna D Zore.

Finding 'Godmother' Santokben Jadeja's son Kandhal is as good an adventure trip as any. Contesting from the Kutiyana assembly segment, adjacent to Mahatma Gandhi's birthplace Porbandar, Kandhal hops from one remote village to another -- he has to cover 22 such villages on December 8 -- all a part of his constituency.

A visit to Rana Vav, Jadeja's hometown, some 10 km on the Porbandar-Rajkot national highway, at around 9 am reveals that he has begun his day at 7 am to cover very remote villages along the beautiful coast that abuts Kutiyana, inform dozens of his supporters at his office.

Karsan Odedra, an NCP office-bearer at Rana Vav, shares Jadeja's phone number. A quick chat on the phone with his bodyguard first, and then with the man himself, and it comes as no surprise that he has 18 cases registered against him.

"Come near Narvai Mata's mandir (temple) when you reach Navi Bunder," Kandhal orders before hanging up.

"The media in Kutiyana are (Narendra) Modi's agents," says Odedra jocularly. But the sneer and brashness in his voice is difficult to miss. "You are the first one to come and ask him for an interview," he adds before asking one of his supporters to accompany me to Navi Bunder, 35 km off Rana Vav.

Jadeja is unfazed by the opposition 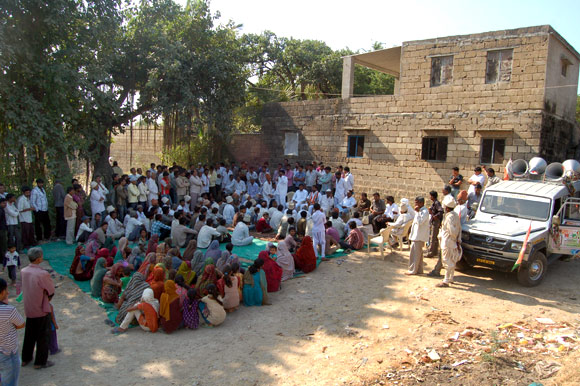 The road is nicely tarred, with windmills dotting both sides of the landscape. It takes just about 25 minutes to reach the designated Narvai Mata temple. "Jadeja saheb just finished his public meeting here. You will have to go to the next village," says a villager. "Another 25 km."

A huge cavalcade, all white SUVs, is parked at the entrance of a big gate to Mocha village. It is an indication that Jadeja is around. Some 500 metres from the main gate, a small group of 100-odd villagers sit on the ground. Jadeja's personal bodyguard and a clutch of senior villagers are seated on white plastic chairs lined neatly facing the crowd.

Jadeja, dressed in a spotless white bush shirt and trousers, a silver bracelet on his left wrist, with red vermilion smeared stylishly on his forehead, is regaling his voters. Standing like a don delivering sermons, he asks, "Will you vote for me or my opponents?"

"Tamne (meaning, we will vote for you)," the crowd beams.

Jadeja folds his hands in a namaste and smiles benevolently, his sturdy chest all puffed up.

Jadeja is pitted against sitting MLA, the Bharatiya Janata Party's Karsanbhai Dulabhai Odedra, a candidate with as much money and muscle power and an equally illuminating criminal record.

Karsanbhai Odedra and Babubhai Bokhiriya, who are contesting from the neighbouring Porbandar assembly seat against the Congress's Arjunbhai Modhwadia, are brothers-in-law. They run a limestone mine and were involved in a theft racket that led to the murder of Mulu Modhvadia, a Congress leader in 2005.

Karsanbhai's elder brother Bhima has been in jail for the murder since 2006.

But Jadeja is unfazed by the opposition.

'My opponents are gangsters running a mafia in Kutiyana' 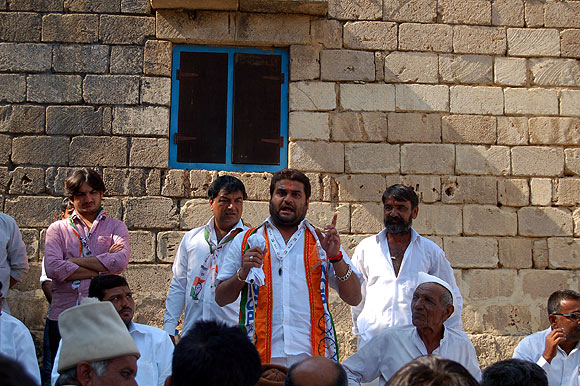 My opponents are gangsters running a mafia in Kutiyana. It is goonda raj (rule of thugs) and you people are the sufferers," he tells the crowd. "But now that I am here I will give you salvation."

"You are like my family. You know me since I was a child. Not only me, you also know my father," says Jadeja, as the crowd appreciates the fact that such an influential man is acknowledging them as family.

"My mother too has served you as Kutiyana MLA," he reminds the crowd of his mother Santokben, who was elected as Kutiyana MLA in 1990, four years after her husband Sarman Munja was killed in an intra-gang warfare.

"This is my mother's constituency and I will be the new guardian of Kutiyana with your blessings. I will be your protector and guard you against the corrupt and criminals," he says.

Jadeja is a modern-day Robin Hood 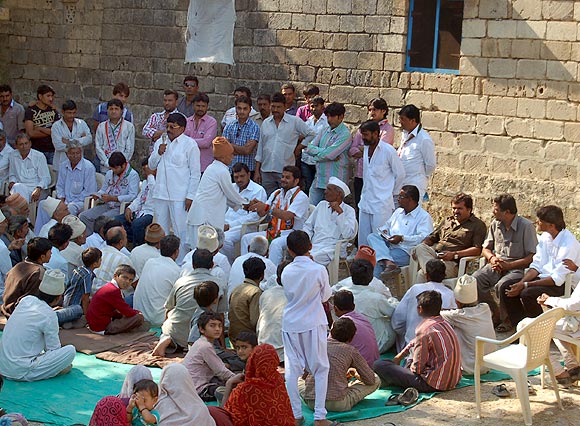 He cleverly peppers his speech with diatribes against his opponents; he connects with his audience, recites limericks, which is followed by imitations that leave the crowd in splits.

"My opponents are having a headache and stomach ache ever since I jumped into the electoral fray," he quips, waiting for people in the crowd to maintain silence.

"Headache because they know that they are dealing with a person like me. And stomach ache because they have eaten too much, suffering from indigestion and are soon going to suffer from loose motions," he says, indicating that he will expose the corruption and mafia raj of his opponents if he is voted as their representative from Kutiyana.

The crowd, once again, erupts with boisterous laughter.

Again he leaves them with bated breath when he tells them that the police have always been his bodyguards. "When I move in and out of courts because of the cases pending against me there are more policemen guarding me then than the lonely cop who is present now," he tells the crowd, who thinks that Jadeja is a modern-day Robin Hood, their "saviour".

'Jadeja saheb fights for the rights of the poor' 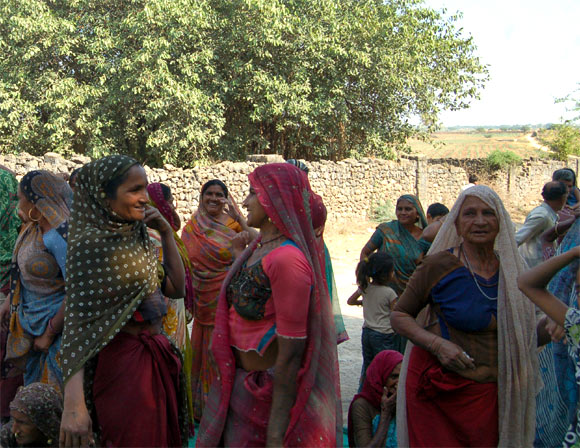 Why should we be afraid of Jadeja saheb?" questions Ranchhodbhai Thakore, a village elder, when asked if he will vote for somebody who is considered a don. "He is our saviour. He fights only those who harass poor people, loot them and take their rights away from them."

"Jadeja saheb fights for the rights of the poor," he continues.

Once the public gathering is over, an eager crowd surrounds Jadeja, shaking hands with him, with elders blessing him and youngsters clicking his picture on their mobile phones. Jadeja struts towards his white SUV as if he has won a battle and is all charged up to go to the next one.

'Sir, can we talk for a few minutes," I ask jumping into the crowd.

"Not now. I have another meeting in the next village and I am getting late," he says.

"But you promised on the phone that you will talk for a couple of minutes," I argue lamely.

"Look, you have come to meet me. You wanted to meet me. I didn't call you," he snaps politely. "So follow me to the next village. We will see after the meeting there."

"Sir, this is a request. Let's talk for a minute now," I persist for an interview.

"I am also requesting you. You have come to meet me so do what I ask you to do," he shoots back, the irritation in his tone quite obvious now.

'The media in Kutiyana are (Narendra) Modi's agents,' I remember Karsanbhai Odedra's words.